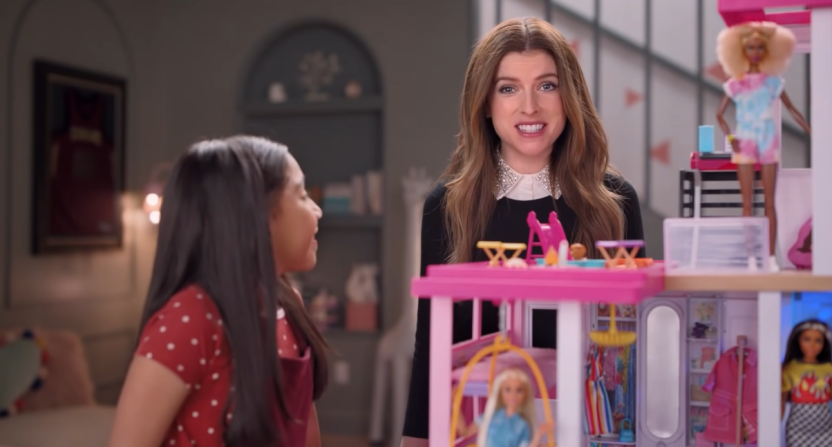 Super Bowl LVI had an exciting finish. But for some of us, the commercials were more memorable. Here were the 10 best:

Rocket Mortgage scored a touchdown with the most creative and fun spot of them all. If you’re trying to buy a home in this tight market, you know how frustrating it can be. Rocket Mortgage effectively tapped into those feelings by using the nostalgia of Barbie Dream House commercials. Anna Kendrick was hilarious at delivering the exposition as Barbie finds her ideal home but must fend off competitors like “Better Offer Betty,” “Cash Offer Carl,” and “House Flipper Skipper.” Just when it looks like Barbie might lose out, Rocket Mortgage comes to her rescue. Plus, this commercial gives us a surprise appearance from He-Man and Skeletor. Bravo.

Lindsay Lohan is one of the great what-ifs in Hollywood history. Immensely talented, she should have had the career of someone like Oscar-winner Emma Stone. But Lohan, a former child actor, ran into many well-documented problems. Here, she smartly pokes fun at herself by showing she’s a whole new person (“trading DUIs for DIYs”). One key part of her self-improvement has been joining Planet Fitness. This commercial makes great use of several cameos, including Dennis Rodman and Danny Trejo. Heck, you don’t even notice until the end that the narrator is William Shatner.

You seemingly can’t get a consensus on anything anymore. However, most would agree that Seth Rogen and Paul Rudd are very funny. Maybe they should consider doing commercials as a recurring side gig. Rogen and Rudd take us through a fictional journey down memory lane of all their “good” times together with Lay’s. The best lines are when Rudd confesses to Rogen that he’s never seen any of his movies. Rogen responds, “Not even the ones we were in together?” The payoff at the end with the demon wife and demon bridesmaids is just perfect.

Spoofing the idea that Alexa can read your mind is almost too realistic. This is a bold strategy by Amazon. We already think that big corporations know too much about our private lives because of our virtual assistants. But there’s one way to make it all more appealing: use Scarlett Johansson and Colin Jost, one of America’s most famous couples. That’s smart if you want to appeal to other married households. Lean into it about how couples aren’t always honest with each other. Jost’s reminder to “fake his own death” to avoid Johansson’s play is a great joke.

The Cable Guy is one of the more underrated dark comedies of the 1990s. So, it was so much fun to see Jim Carrey reprise his role as the creepy and obsessed cable TV installer. The film was a box-office flop, but it quickly became a cult favorite. There’s no Ben Stiller in the commercial, but there’s the always delightful Geraldine Viswanathan. In this spot, Carrey knocks on the door, rings the bell, and yells out his trademark “Cable guy!” But of course, Viswanathan doesn’t need cable because she has Verizon 5G Internet. This commercial is wonderfully silly, and typical Carrey.

If you enjoy your commercials on the snazzy side, Michelob Ultra wins on style points. This is a pop culture marriage between two iconic bowling movies: The Big Lebowski and Kingpin. Steve Buscemi makes an appearance in an obvious nod to his character Donny from The Big Lebowski. Also, the song “Showdown” by Electric Light Orchestra was featured in Kingpin. This bowling alley quickly fills up with athletes including Peyton Manning, Nneka Ogwumike, Jimmy Butler, Brooks Koepka, and Alex Morgan. The big reveal at the end is when Serena Williams joins the fun.

Having Jerod Mayo in a commercial about Hellmann’s mayonnaise feels a little too on the nose. Also, calling Mayo a “legend” is a bit of a stretch. Mayo, now an assistant coach for the New England Patriots, was a good player — two-time Pro Bowler, one-time All-Pro for the Patriots — but was never legendary. Even hardcore NFL fans would have a hard time recognizing him. Still, this tackling food waste spot is reminiscent of the Terry Tate office linebacker commercials. What makes it work is Pete Davidson saying, “I get it. I’m very hittable.” Funny and self-aware.

If this were an actual movie, you’d watch it. The affable Eugene Levy becomes a whole new man when he takes Brie Larson’s 2023 Nissan Z out for a spin. He’s no longer merely Emmy award-winning sitcom star Eugene Levy. He’s the adventurous “Thrill Driver.” Soon, his hair is longer and he’s traded in his suit for a leather jacket. He’s remade himself into an action star who’s being chased around Los Angeles by Danai Gurira, Dave Bautista, and a bunch of bad guys on motorcycles and helicopters. The commercial ends with Levy at a movie premiere for “Thrill Driver.” Now I want a Nissan.

Miley Cyrus and Dolly Parton team up for a parody that’s a callback (pun intended) to a time when musical artists regularly lent their voices to inspirational public service ads (PSAs). That seems less common these days (FYI: Otis Redding’s Stay in School might be the greatest PSA of all-time). This time, Cyrus and Parton are crooning to urge us to “Do it for the Phones.” The sad-looking phone on the swing is a fabulous visual gag. Plus, it’s a catchy tune. Would actually like to hear a three-minute version of this song.

Larry David going full Larry David is always amusing. One of the most entertaining skeptics is in many ways a perfect pitchman for a cryptocurrency exchange. Since many people don’t fully grasp virtual currency, why not get someone who has made a living making fun of things he doesn’t understand? In this commercial, David doubts several inventions and innovations throughout history such as the wheel, forks, toilets, voting, the Walkman, etc. The best one is when after seeing Thomas Edison’s light bulb, David tells Edison: “Can I be honest with you? It stinks.”

Coinbase punted on creativity. It spent millions on the dullest commercial in Super Bowl history: a floating QR code that looked like a bad screensaver. No doubt it confused many people. However, there’s a counterargument. The commercial worked on its tech-savvy target audience because it sent a ton of traffic that resulted in the cryptocurrency app reportedly crashing.