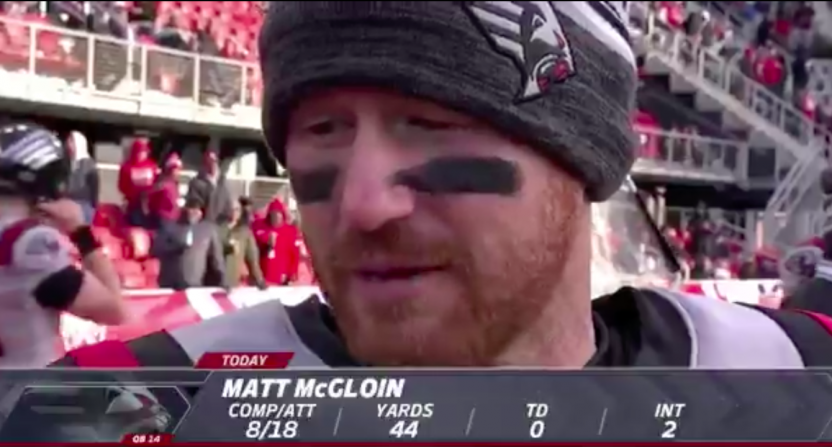 The first week of the new XFL revealed that, while the upstart league is working out the kinks, the potential was there to create a football product that can actually make it past the first season.

One of the big reasons for this was the many toys and techniques available to ESPN/ABC and Fox when it came to broadcasting XFL games. Not only were they both given access to speak with players and coaches during games but TV audiences also got plenty of inside access to play calls, replays, and referee decisions. Not all of it was interesting but it was novel to see it all play out. The expectation was that, as the season rolls on, they would fine-tune the offerings, cut out the uninteresting parts, and figure out how to balance new tricks with engaging TV moments.

You miss a kick in the XFL? you're going to have to answer to it immediately on the sidelines by a reporter [in this case @diannaESPN]pic.twitter.com/SuSVUcMicx

One of the nitpicks from week one was the lack of follow-up on multiple occasions when a starting quarterback was benched during the game. Despite the fact that we had been promised sideline access, we didn’t get post-benching interviews or any kind of insight that helped us to understand what the situation was and how everyone was feeling. In that sense, it was no different than an NFL broadcast.

That changed in the first game of week two when the NY Guardians visited the DC Defenders and we got a great look at the XFL’s ability to create “storylines” during games. Because let’s be honest, the football itself isn’t going to blow fans away. However, the access available provides the league and it’s broadcast partners with the chance to tell stories in a way the NFL and other pro leagues simply can’t.

The XFL doesn’t have too many household names but if you were making a list of the players who stand out based on name recognition, Guardians quarterback Matt McGloin would be on it. A star at Penn State, McGloin spent 4+ seasons in the NFL as a backup but seemed like the ideal kind of talent for the XFL. A college name who still had something to prove looking for one more shot in the pros. He had a decent debut last week in NY’s 23-3 win over the Tampa Bay Vipers (15 of 29, 182 yards, 1 TD) but the victory came mostly on the heels of a dominant defensive performance. We wouldn’t really know what McGloin and the Guardians offense had up their sleeve until Saturday when they faced off against fellow 1-0 squad, DC.

By all accounts, the game ended up being a real bust for New York. Not only did they get blown out, 27-0, but McGloin had a particularly terrible day that ended in his benching and left the door open for another quarterback to supplant him if the struggles continue. That, in and of itself, was not unique. But what felt unique was the way the ABC/ESPN broadcast was able to give us insight into McGloin’s state of mind and access into how the game affected his relationship with the coaching staff in real-time. In effect, we watched The Matt McGloin Story play out.

We've said it once and we'll say it again (probably many times).

They call them the Defenders for a reason.

It started when McGloin had just thrown the first of many interceptions on the day. Just as we had seen last week when a kicker missed a field goal, McGloin was immediately snagged for a “what went wrong” interview.

Throw an interception ➡ immediately get interviewed about it.

This is the #XFL.

McGloin’s day kept getting worse as he threw another pick, the offense never found any rhythm, and the Guardians went into the locker room down 12-0. That’s when sideline reporter Dianna Russini caught up with McGloin and his emotions got the better of him. He told her that he thought the problem lay at the feet of the offensive gameplan and that it needed to be blown up. Bad idea for him, great drama starter for TV audiences.

Intended or not, the XFL sideline reporters can impact teams directly through their interviews. For example, here's Matt McGloin going off-script before the half (1/3): pic.twitter.com/IMtEwtj31U

This is where the XFL broadcasts can shine because instead of waiting for the post-game press conference, Russini walked right over to Guardians head coach Kevin Gilbride and told him what McGloin said. Sure it’s a real narc move, but it helps heighten the drama and invests us in what might happen next.

Then Matt gets narc'd out to his head coach (2/3): pic.twitter.com/lik8pXDQwY

Now that McGloin is popping off and Gilbride is aware of it, the two of them come together (entirely because the broadcast team was able to orchestrate it!) and we get a critical moment between coach and QB.

And then Matt gets an earful from his coach right before the 2nd half begins (where he immediately throws a Pick Six). (3/3). pic.twitter.com/Vj8118yKRf

No room for guessing, we know that there’s friction between the two sides and McGloin is hearing about it. So, when he goes out there in the second half and immediately throws a Pick Six, the audience is absolutely riveted to find out what he is going to say about it.

The @XFLDefenders' defense is something special

The wheels were officially off for McGloin and it felt like discussions must have been happening behind the scenes about what to do next. This is where the most interesting part of the “storyline” played out. Because Gilbride and McGloin have mics on them, TV audiences got to sit back and watch a conversation between the two frustrated men play out. McGloin kinda-sorta throws his teammates under the bus while Gilbride tries to calm his No. 1 QB down and salvage the game.

Also, this is what was missing last week following QB benchings/problems. For as long as players & coaches don't remember they're mic'd, #XFL should take advantage of this. pic.twitter.com/0ozkuH5dxv

Now we’re guessing you’re probably rooting against McGloin at this point. He’s a great “villain” that we now want to see get a comeuppance. That comeuppance comes soon after as he gets benched.

Because the broadcast team knows what they’re doing, McGloin gets interviewed about it. And as if McGloin knows he’s the villain of the story, he doubles down on blaming the gameplan and, indirectly, his coaches, while the game is still being played and the outcome has yet to be decided.

Matt McGloin gets benched after completing 8-of-19 pass attempts with 2 INT, then proceeds to rip his team/coach while the 4th quarter is still being played.

This is peak XFL pic.twitter.com/JKVwShqTrQ

After that, the Defenders took care of business and finished the Guardians off. By that point, we all pretty much knew they would, but that was no longer what we cared about anyway. The Matt McGloin Saga was what had our attention and the broadcast crew did a great job harnessing that story as it developed.

You could make the case that it’s not a good thing for sideline reporters to have this kind of access, or for national audiences to be able to listen in to “private” conversations on the sidelines, but that misses the point of the XFL. This isn’t going to be where you go for great football. This is where you’re going to go to get your storyline fix. To actually see the things that play out behind-the-scenes in the NFL and college football. To be proven right or wrong about how players and coaches feel about one another. To see the difference between what people to the cameras and what they really want to say.

The old XFL was fireworks and cheerleaders. The new XFL is good, old-fashioned storytelling. And that bodes well for its future.