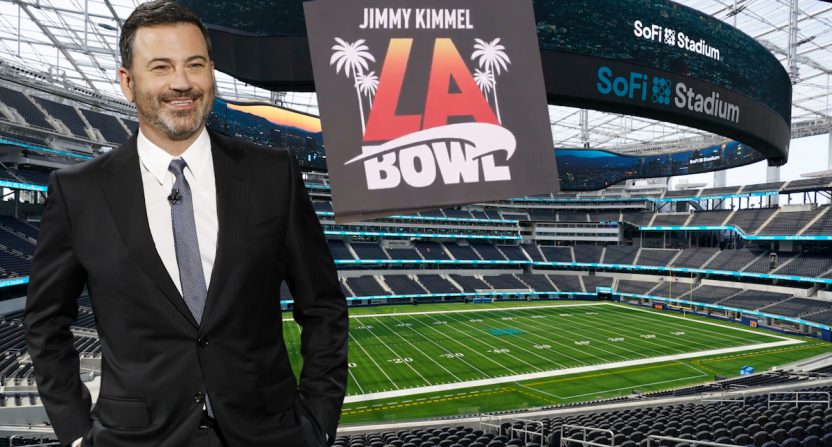 Sure, there are probably too many college football bowl games. (Those who just love the sport and enjoy the year-end sports schedule filled with different schools and conferences don’t seem to mind, though. Nor do TV networks with time to fill.)

But in accepting that reality, why not have some fun with so many games, especially when it comes to naming and sponsorship opportunities. ABC’s late-night talk show host Jimmy Kimmel apparently agrees, announcing on Wednesday night’s Jimmy Kimmel Live! that his name will be on a new bowl game to be played in Los Angeles.

The Jimmy Kimmel LA Bowl is scheduled to be played Dec. 18 at SoFi Stadium. (That’s a Saturday, just like a regular college football game.) The bowl will feature a matchup between the Mountain West’s No. 1 team and the No. 5 selection from the Pac-12.

“It’s like an early Christmas gift for all of us,” said Kimmel as part of the announcement. The game will be televised on Kimmel’s home network, ABC.

“Ever since I was 52 (which was last year), I have dreamed of having a college football bowl game named after me,” said Kimmel during Wednesday’s opening monologue. “And tonight, I’m thrilled to announce that dream is finally coming true.”

Kimmel emphasized that this was not a joke, though viewers could’ve understandably believed so considering the late-night comedy show’s love of pranks and making people look foolish. Kimmel and SoFi Stadium agreed to a multi-year partnership, according to Deadline. How much Kimmel (and his people, presumably) paid for the naming rights to the LA Bowl has not yet been reported.

“This is history in the making,” Kimmel continued. “Never before has a bowl game been named after a human being. And Papa John doesn’t count. He’s barely human.”

Had the game been played last season, which was the original plan until the bowl was canceled due to COVID-19 concerns, the LA Bowl likely would have matched San Jose State versus Stanford, or perhaps Utah, depending on which school accepted the game’s offer.

The LA Bowl will surely get plenty of promotion on Jimmy Kimmel Live! in the weeks leading up to the game. Each of the football teams playing in the game will likely be invited to appear on Kimmel’s show as well, which could be fun.

How much of a presence will the comedian be at the game itself? Will he do the official coin flip or perhaps send his sidekick, Guillermo, out to perform those honors? We’ll find out in December.