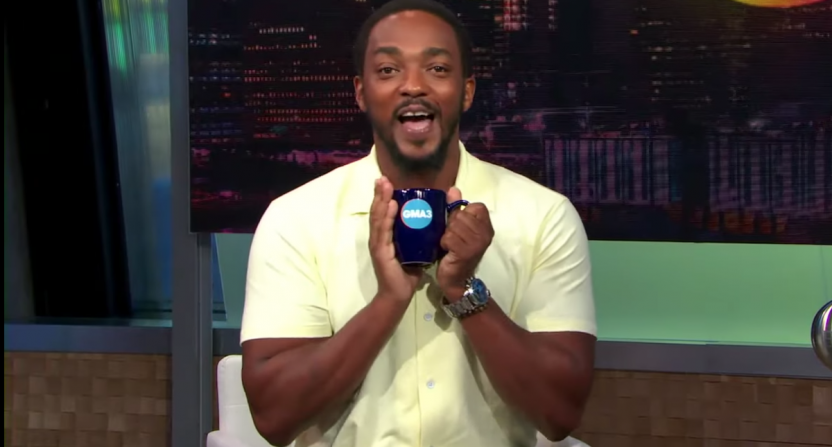 Whether or not you choose to include the ESPYS in your weekend sports schedule, the sports awards show is on the menu if you’re interested. Broadcasting Saturday night at 8 p.m. ET on ABC, this year’s ceremony will be hosted by actor Anthony Mackie (The Falcon and the Winter Soldier) live from the Seaport in New York City.

Mackie appeared on Good Morning America Friday to promote the show and his hosting gig, providing hope that his star presence and sense of humor might bring some entertainment value to an evening that is largely perceived as filler on the annual sports calendar.

Our newest Captain America explained that he’d be wearing his “Saints draws” while hosting this year’s ESPYS, his lucky pair of New Orleans Saints underwear that the lifelong fan has worn on several previous occasions for inspiration and good luck.

Neither George Stephanopoulos, Cecilia Vega, nor T.J. Holmes inquired if he was wearing those boxers (or briefs) when he donned Marvel’s heroic Stars and Stripes on the finale of The Falcon and the Winter Soldier. (Though Vega did try to get some breaking Marvel news, to no success.) Maybe we’ll learn more about that during the actual ESPYS show.

Mackie also admitted he would be a major fanboy on Saturday, bringing all sorts of items — footballs, baseballs, and bats — for the athletes and fellow celebrities in attendance to sign. The actor’s Instagram and Twitter accounts might be worth following for multiple selfies from backstage. He’s not throwing away his shot.

The ESPYS have created some memorable moments during their 28-year run. Jim Valvano’s inspirational speech at the inaugural show in 1993 might be the best of them. LeBron James, Dwyane Wade, Carmelo Anthony, and Chris Paul encouraging fellow athletes to be socially aware and active at the 2016 awards is another. Caitlyn Jenner receiving the Arthur Ashe Courage award in 2015 painted ESPN as “too liberal” for many detractors.

Will the 2021 edition of the show produce anything nearly as notable, something we’ll be talking about on Sunday and maybe even Monday? (You can see a list of presenters and expected attendees here.)  The ESPYS will air on ABC Saturday night (July 10) at 8 p.m. ET.