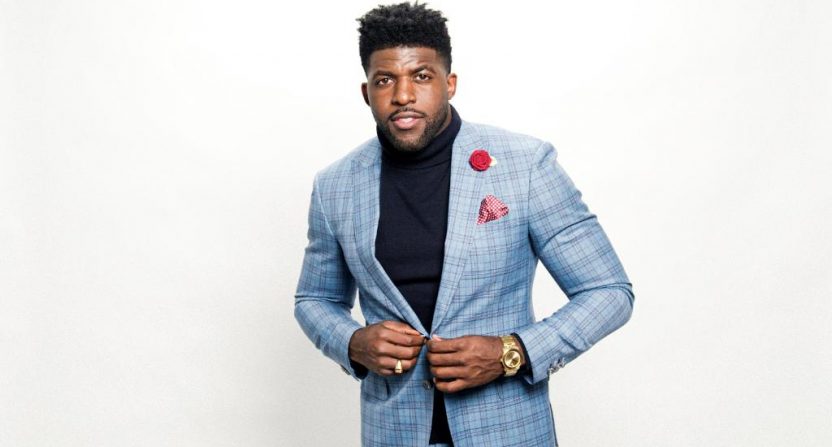 Emmanuel Acho left the Disney family in 2020 but he’s coming back into the fold, at least briefly, to host the upcoming “The Bachelor: After the Final Rose” one-hour special. He replaces longtime “The Bachelor” host Chris Harrison, who is currently ‘stepping aside” from the show following controversy.

Acho, who spent four seasons in the NFL, began his broadcasting career as an analyst for the Longhorn Network in 2016, moving over to ESPN in 2018. In 2020, it was announced that he would leave ESPN to join Fox Sports, replacing Jason Whitlock as a co-host on “Speak For Yourself.”

IT’S OFFICIAL: I’ve accepted the Rose & am honored to be hosting the @bachelorabc After the Final Rose this year.

It’s been a pivotal season & this episode will be one of the most storied shows in its history. Empathy is needed and change is coming. See y’all then! ? ❤️ pic.twitter.com/eWBXT6Kv6J

“It’s both an honor and privilege to be hosting ‘After the Final Rose.’ This is an incredibly pivotal episode on one of the most storied shows in television history,” Acho said in a statement from ABC.

Acho is also an author and the host of the YouTube series “Uncomfortable Conversations with a Black Man,” which is self-described as “a safe place to have the uncomfortable conversations about race that many white people have never been able to have.” That might be what makes him an ideal host for the special, given the fraught racial conversations and controversies that have been taking place around the ABC show this season.

In its 25th season, this is the first time the show has featured a Black bachelor (Matt James). Controversy swirled around one of the women vying for James, Rachael Kirkconnell, who was photographed at an antebellum plantation-themed fraternity party in 2018. Harrison initially defended Kirkconnell and tried to downplay the racial context of the photos, but when his comments rang tone-deaf with many, including many of the women who appeared on this season of the show, he apologized and announced that he would be “stepping aside for a period of time and will not join for the After the Final Rose special.”

During the one-hour special, which airs March 15 at 10:00 p.m. following the season finale, Acho “will sit down with Bachelor Matt James to discuss his season, his final decision and where he is now, as well as cover the current events about the franchise,” per an ABC announcement. He’ll also speak with the three finalists, which includes Kirkconnell.

“The Bachelor” franchise has long tried to have its cake and eat it too when it comes to the way it handles race. That strategy simply won’t suffice any longer. Bringing in Acho as a host for this special doesn’t solve those issues, but it’s a signal that they’re willing to move in the right direction and have tough conversations in a time when they need to.