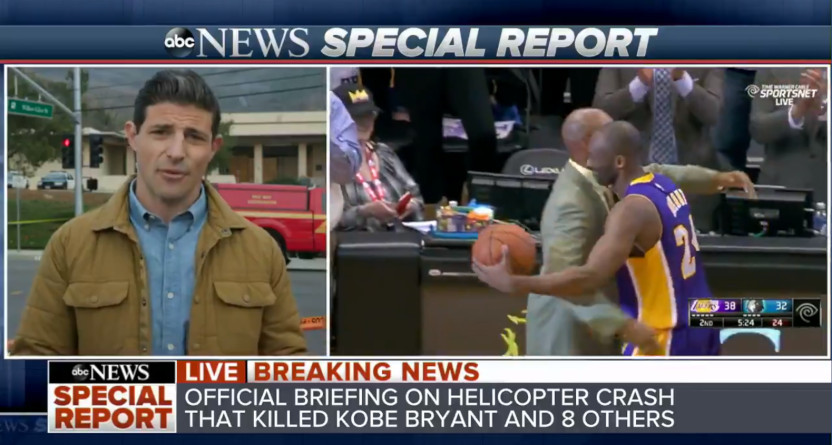 Soon after the helicopter crash near Los Angeles Sunday that killed nine people, including Kobe Bryant and his daughter Gianna, there were plenty of inaccurate reports spreading about who was on the helicopter. Some rumors surfaced on social media that former Lakers’ player Rick Fox was on board, causing plenty of issues for the very-much-alive Fox, while the BBC mistakenly included some footage of LeBron James instead of Bryant in their coverage. But a perhaps a bigger mistake still came from a prominent reporter, and on air to boot. That would be ABC News chief national correspondent Matt Gutman, who when covering the crash from the scene, talked not just about Bryant, but added that “four of his children are believed to be on that helicopter with him”:

Here's what ABC reporter Matt Gutman is reporting about the Kobe Bryant helicopter crash and his daughters:

"…and the fact that 4 of his children are believed to be on that helicopter with him…." pic.twitter.com/6ETCqw21Aj

That was very much not true: Bryant’s one daughter Gianna was on the helicopter, but his three other daughters were not. Several hours later, Gutman issued a correction on air, and he later tweeted that as well:

Today I inaccurately reported it was believed that four of Kobe Bryant’s children were on board that flight. That is incorrect. I apologize to Kobe’s family, friends and our viewers. pic.twitter.com/yYwuB9vpZl

On Wednesday, ABC News announced a suspension for Gutman, as per Stephen Battaglio of The Los Angeles Times:

“Reporting the facts accurately is the cornerstone of our journalism,” an ABC News representative said in a statement to The Times that confirmed the suspension. “As he acknowledged on Sunday, Matt Gutman’s initial reporting was not accurate and failed to meet our editorial standards.”

The representative did not divulge the length of Gutman’s suspension. In a statement to The Times, Gutman issued another apology.

“We are in the business of holding people accountable,” Gutman said. “And I hold myself accountable for a terrible mistake, which I deeply regret. I want to personally apologize to the Bryant family for this wrenching loss and any additional anguish my report caused.”

There was plenty of false information flying around in the minutes and hours after this crash, including the Fox rumor, but Gutman’s report stood out because it came on air and came from a highly credible reporter with a long history of prominent work. Gutman has been with ABC News since 2008, frequently appears on their national news programs, and has won significant awards for coverage of the Las Vegas shootings in 2017 (an Emmy) and for coverage of the rescue of a boys’ soccer team from a flooded cave in Thailand in 2018 (which led to him writing a book on that). Thus, him saying that carried a lot of weight, and that report was spread far and wide quickly, even if some expressed skepticism of it thanks to that information not being reported elsewhere. So this was a bad mistake, and it’s understandable why ABC suspended Gutman here.