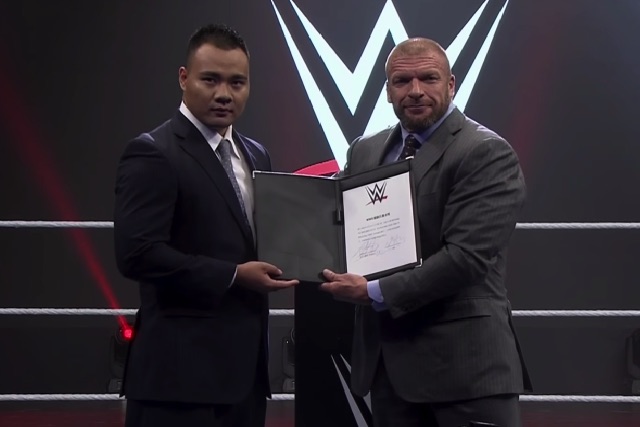 WWE is expanding its global reach, signing the first Chinese wrestler to train in its developmental program. Not at all coincidentally, the company also reached a content distribution agreement with China’s PPTV.

Bin Wang is the first wrestler signed from China, emerging from a four-day tryout WWE held in Shanghai. Wang, 22, is a 6-foot-3, 220-pound athlete who’s trained during the past two years with legendary Japanese wrestler (and WWE Hall of Famer) Antonio Inoki. He inked a developmental deal and will begin training at the WWE Performance Center in Orlando, Florida.

WWE held a press conference to announce the news of the Wang signing and digital distribution deal in Shanghai. Here is the official announcement from WWE president Triple H (Paul Levesque):

But the agreement with PPTV is obviously far more important to WWE’s outreach as the company looks to expand into China. As of June 28, fans in China will be able to stream the full three-hour Raw program and two hours of Smackdown on demand through PPTV and PPTV sports. That content will be available to viewers through the PPTV app on Smart TVs, set-top boxes and mobile devices, in addition to the PPTV website. PPTV reaches 400 million users across China.

WWE shortform content will also be available through those digital platforms, while PPTV will launch and run a new WWE website in China. The company’s chief strategy and financial officer George Barrios said WWE is working on a model that will bring WWE Network to Chinese audiences, as well.

According to Barrios, the goal is for WWE to follow the same success that the company has had in the U.K. and India, which are its two largest revenue markets after the United States.

Asked about China’s longer-term potential, he points out that the U.S. remains the largest revenue market for WWE, followed by the U.K. and India, which has grown over the 16 years the company has been active there. “Our internal goal is to over time replicate similar success in China,” Barrios says. “The opportunity in China is huge.”

If there was any doubt as to how big a deal this is for WWE, John Cena spoke fluent Mandarin (which he also demonstrated in April on SportsNation) for introductory remarks at the press conference. What a company man!

WWE also announced that it will hold its first live event in China in three years, with WWE Live 2016 China scheduled for Sept. 10 at Mercedes Benz Arena in Shanghai. Cena, current WWE champion Roman Reigns, Seth Rollins and WWE Women’s champ Charlotte are among the wrestlers scheduled to perform.