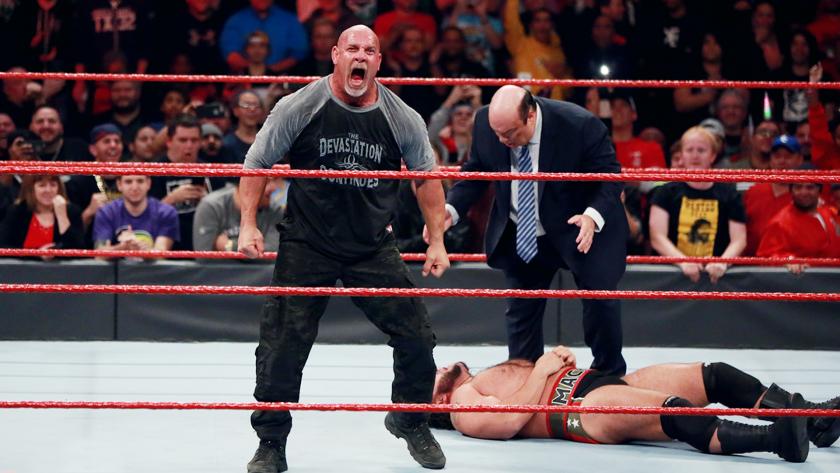 Bill Goldberg made his second Raw appearance to promote his Survivor Series match with Paul Heyman. This appearance was different from his Oct. 17 return because he talked a lot less. For the first time in 12 years, he performed some of his signature moves on Heyman as well as Rusev, who happened to be in the wrong place at the wrong time.

Raw started with Goldberg’s music and his entrance backstage. They put him in the opening segment because the NFL Monday Night Football game on ESPN starts 30 minutes after Raw begins, so WWE wanted more people to see this. We’ll see how the viewership numbers look. When Goldberg was back two weeks ago, there was a spike in the numbers, which showed that people really missed him and it was smart for WWE to bring him back. Goldberg mentioned Brock Lesnar and their Survivor Series match in three weeks, but then he was interrupted. It was Lesnar’s advocate, Paul Heyman. They tried to do what didn’t work last week when Heyman wanted the crowd to chant for Goldberg, but they chanted for Lesnar instead. This week, the crowd did chant for Goldberg, likely because he was in the ring and Lesnar wasn’t there, even though Heyman tried to convince people that he was.

Rusev interrupted the segment to talk trash about Goldberg. He said he used to watch Goldberg, but that was a long time ago. He questioned if Goldberg was still a destructive force like he used to be. Rusev threw a punch, Goldberg came back with an attack of his own and fell doing one of his knee strikes. It took just two knee strikes for Goldberg to weaken Rusev for a Jackhammer. With Rusev down, Goldberg looked at Heyman and hit him with a Spear. It was obvious Heyman was wearing some padding on his chest because he isn’t as fat as it looked there.

The segment came off well, although Goldberg’s Jackhammer didn’t look as devastating as it used to look. The Spear on Heyman was poorly done. I don’t know if there’s anybody to blame for that, though. Heyman isn’t a wrestler, so when you ask a non-wrestler to take a bump, it’s usually going to look bad. That’s just how it is in wrestling. Heyman left in an ambulance, or at least that’s what WWE told us in the storyline. It’s a way to put over Goldberg’s Spear as a deadly move.

It bothered me a bit that Rusev was the one who was beat up by Goldberg. That decision was likely made because he’s booed a lot as the anti-American. He’s also one of the best heels on Raw, though, so having a part-timer beat him up so easily makes Rusev look bad. I’m sure that WWE will try to use the excuse that Rusev was beat up from Hell in a Cell. They didn’t even try to cover for it. How about a pairing of Rusev with Paul Heyman? It could be what gets Rusev to the next level as a main eventer although Heyman seems content in just representing Lesnar.

The good thing is that the crowd response was strong for all of it. They cheered everything that Goldberg did. They chanted his name the whole time. They cheered when he fought back and hit his moves. There’s no denying that the crowd loves seeing him back in a WWE ring.

On Twitter, Goldberg commented on his moves not looking as great as they once did.

Ring rust…it happens. RT @WWE: .@Goldberg kicks off #RAW with a #Jackhammer to @RusevBUL, and a … https://t.co/DJWZ9QOTqz

I hope he works off that ring rust in the next three weeks because facing Brock Lesnar isn’t going to be easy. Lesnar hits hard and isn’t going to bump his ass off to make Goldberg look great. It’s going to be a very physical match that could be a disaster if either of them slacks off in building up to it. Goldberg looks like he’s in great shape at age 49. I just don’t know if he’ll be capable of putting on a good match since a lot of his matches in his prime were below average.

Lesnar and Goldberg will both be on Raw in two weeks as a final way to hype their Survivor Series. That will be an important segment in order to get fans ready for what we’ll see on Nov. 20 at Survivor Series.

One of the worst matches of the year. It was a comedy match with Enzo & Cass dressed like Buzz Lightyear and Woody. The whole thing was brutal, though. I get wanting to do comedy on a theme show since it’s Halloween. It doesn’t mean it was a good idea. The finish was bad as Gallows HELD A PUMPKIN ON HIS OWN HEAD (all caps to accentuate the stupidity) and Enzo hit a DDT off the ropes that barely connected. My favorite part of this match was when it ended. This didn’t help anybody.

Perkins was mad about Kendrick fooling him at Hell in a Cell, so he was the aggressor in this match. Best spot in the match was when Perkins hit a hurricanrana while they were against the ropes. Kendrick could have gone back in to break the count, but he chose to stay out of the ring to lose by countout. He kept the title. Perkins attacked with the knee bar outside the ring to “win” the segment, even though he didn’t win the title.

Prior to the match, Strowman told Raw GM Mick Foley that he wanted to be on Team Raw at Survivor Series. Foley told him to win the battle royal to earn his spot.

The match went about eight minutes with a lot of Raw‘s midcarders in there. Sheamus tried to eliminate Cesaro, but then Cesaro tossed him out. Strowman was there to eliminate Cesaro. Strowman eliminated most of the guys including Neville as the third last guy. Sami Zayn tried to pull Strowman out. It didn’t work because Strowman threw him out. It was less than 10 minutes and Strowman won as expected.

Swann took the place of Sin Cara in a repeat of the six-man tag from Hell in a Cell. It was another win for the good guys as Swann nailed a back kick on Nese. The match was only six minutes. It’s hard for fans to care about these guys when they get almost no promo time and have matches under 10 minutes that don’t have a lasting effect. Swann appears to be receiving a mild push since he beat Kendrick last week.

The match was set up after a long promo from Charlotte as she told Bayley she had to face one of her partners at Survivor Series. Bayley thought it might be Dana Brooke again, but instead it was Nia Jax.

Jax won the match easily. They wrestled many times in NXT with Bayley coming out on top, but Raw is a different story. Jax is a heel monster. Bayley should be booked stronger, though. She’s supposed to be one of the top faces on Raw and was made to look like such a loser here. Easy win by Jax, thanks to a Samoan Drop after about six minutes.

A quick match with Sheamus getting the win for his team with the Cloverleaf submission. Primo went to attack with a top rope move, but Cesaro nailed him with an uppercut right before Epico tapped out.

With Kevin Owens at ringside, it was obvious how this match was going to end. Jericho was in control for a good portion of the match, Reigns made the comeback and hit his Spear at around the 15-minute mark. That’s when Owens jumped into the ring to attack Reigns with a disqualification finish. It was a solid match even with the cheap finish.

After the match was over, Seth Rollins ran out to make the save. He sent Owens out of the ring and hit two suicide dives on him. He beat up Jericho, went for the Pedigree and Owens pulled Jericho out of the ring to save. Raw ended with Rollins facing off with Reigns in a staring contest between two friends that haven’t been on the same page in nearly two-and-a-half years. The crowd was cheering for both of them while chanting “Yes” and “Shield” at different points.

That ending likely means that Rollins is on Raw’s Survivor Series team. It should also lead to Rollins and Reigns teaming up against Jericho and Owens on Raw either next week or the week after that.

I normally put three things here, but it was a boring show without many interesting segments. I just wanted to shout-out The New Day for their Halloween costumes.

The New Day weren’t featured in a match, but they did have the best Halloween costumes. They were dressed as three different characters portrayed by WWE Hall of Famer Charles Wright, better known as The Godfather. Xavier Woods was Papa Shango, Big E was Kama and Kofi Kingston was The Godfather. They really pulled it off well.

During their promo, they talked about Survivor Series with them being the captains of Team Raw’s tag teams.

Looking Ahead To Survivor Series Here are the matches advertised for Survivor Series on Nov. 20 in Toronto. It features both Raw and Smackdown Live talents. It’s also going to be a four-hour pay-per-view event.

There will probably be some more mid-card matches too.

It was a below-average edition of Raw again. I feel repetitive in saying that, but it’s true. There really isn’t anything that is must-see on Raw most weeks, although I enjoy the antics of Owens and Jericho a lot. In terms of matches, they rarely deliver classics anymore. A lot of it feels like a repeat. The road to Survivor Series needs to be better than this. There are two more weeks to get it right.