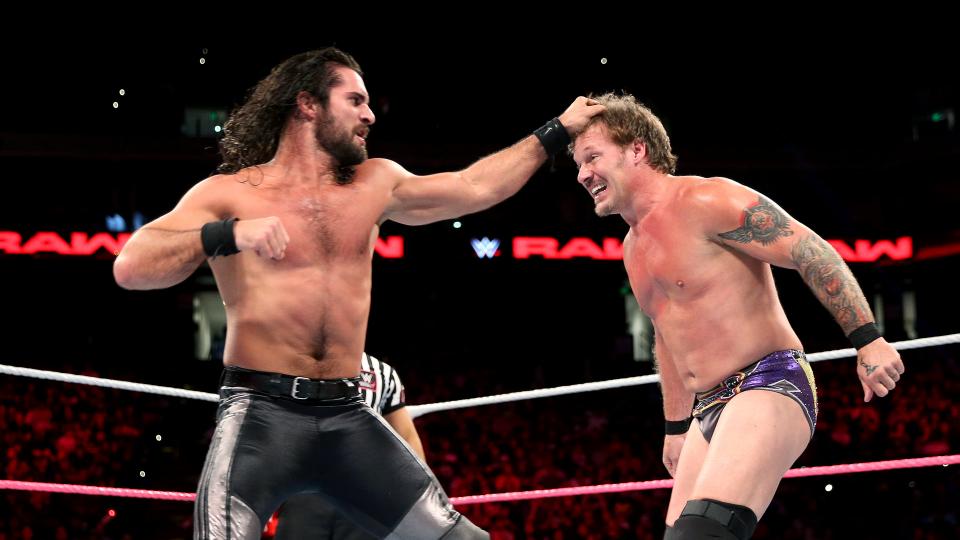 The main event of this week’s episode of WWE Monday Night Raw saw Seth Rollins battle Chris Jericho in an excellent match. The other big news item from this week’s show is that Bill Goldberg will appear on Raw next week for the first time in 12 years to set up a match with Brock Lesnar.

Rollins was back in action for the first time since Clash of Champions a few weeks ago. He missed a couple of weeks because of a bruised rib suffered when Kevin Owens nailed him with a gutbuster off the middle ropes.

Jericho was on fire all night long with some memorable lines during his in-ring promo exchange with Mick Foley, Stephanie McMahon and Owens to set up the match. Jericho was mad at Foley again, so he put him on “The List,” even though Foley’s the one that told him to start The List and Jericho already put him on it. Foley already announced Owens vs. Rollins for the Universal Title in a Hell in a Cell match at Hell in a Cell on Oct. 30. It led to Stephanie making the Rollins vs. Jericho match on Raw with the stipulation that if Jericho wins, then he gets added to the Universal Title match.

Rollins had a very competitive match with Jericho that went 20 minutes. There were a lot of believable near-falls for both guys with the crowd chanting “this is awesome” for them in appreciation for what they were doing out there.

I liked the way Jericho came close to winning multiple times with the Walls of Jericho, the Lionsault and, at one point, after Owens hit a cheap shot with a kick to Rollins’ face to nearly give Jericho the victory. Rollins kept kicking out, countered the Walls of Jericho into a cradle roll-up and it was enough to give Rollins the clean win.

To end Raw, Rollins fought off Owens and Jericho during a two-on-one attack. Owens went up the ramp alone, so Rollins nailed Jericho with a Pedigree. The story is that for the second week in a row, Owens let Jericho get beat up without saving him.

I’m not sure where Jericho fits into plans at Hell in a Cell, but they are clearly building up to the end of his friendship with Owens in the next month. It was another week where Owens came off like a jerk who didn’t help his friend when he needed him.

The WWE2K17 video game is released today and as any WWE fan can tell you, Bill Goldberg was available in the game via pre-order. We know because WWE promoted that heavily for the last two months. Ever since Goldberg was announced for the video game, there were rumors that he would be back in WWE in some form, similar to The Ultimate Warrior and Sting in recent years.

Last week, it was reported in the Wrestling Observer (available via subscription at wrestlingobserver.com) that WWE was setting up Goldberg vs. Brock Lesnar at Survivor Series on Nov. 20. Goldberg did an ESPN SportsCenter interview last week and was pretty vague about it. He said he had to get in great shape to take on Lesnar, but wasn’t sure if he wanted to do it. He likely said that even though the deal was probably completed before the appearance, because WWE used the interview in a promo on Raw.

Paul Heyman showed up on Raw for the first time in over a month to address Goldberg’s comments, while also plugging the video game. Heyman talked about how Goldberg is one up on Lesnar since Goldberg beat Lesnar at WrestleMania 20, which was a terrible match as both men were leaving the company at the time and the crowd hated them for it.

Heyman said that Lesnar authorized him to challenge Goldberg to a match anywhere and at any time. He ended by using Goldberg’s catchphrase: “You’re Next!”

There was a quick reply from Goldberg with this tweet.

Booking my flight to answer that big mouth @HeymanHustle 's challenge next week in person on #MondayNightRaw #WhosNext? #seeyathere @WWE

Next week’s Raw takes place in Denver with WWE advertising Goldberg heavily. They plugged it during Raw several times and as they went off the air.

It’s going to be interesting to see what happens next week, because it’s the first time Goldberg is on Raw since he left in early 2004. Twelve years is a long time to be away, but I think it should work well, just like when Sting came back for Survivor Series two years ago. Goldberg’s career is much shorter than Sting’s, yet he still made a tremendous impact in the business. The “Goldberg” chants that Heyman instigated showed that there is still a lot of crowd support for him.

Going into next week, I’m intrigued by the presence of Goldberg in WWE in 2016. I was a fan during his rise in WCW from 1997 to 1999, but his one-year run in WWE from 2003 to early 2004 bored me a lot. His best feud during that run was when The Rock put him over in April 2003. Then Rock left and Goldberg had an awful feud with Triple H that lasted too long.

The reality is that Goldberg is 49 years old with no matches under his belt in 12 years. He wants to do it so his 10-year-old son can see him in the ring one time. I think that’s a great reason to do it, but I have my concerns that the match is going to suck too. I guess we’ll find out at Survivor Series later next month.

This week’s Raw featured some weak in-ring action with some short matches and also some predictable finishes.

I thought this was going to be great, but they just didn’t click very well. The story was that Sheamus got into an altercation with Xavier Woods outside the ring, then Big E took out Sheamus and Kingston got a surprising pinfall to win. It was done to set up their Hell in a Cell tag match, along with the idea of Cesaro and Sheamus continuing to have issues.

It was an easy win for Bayley. The match only went about two minutes, with Bayley winning clean. Post-match, Dana Brooke nailed Bayley with a forearm to the back. This is payback from last week after Bayley won their physical confrontation last week.

This was a cruiserweight tag match with WWE pushing the idea that Sin Cara is now a part of the Cruiserweight Division. The match felt rushed because they only got four minutes. Dorado got the pin with a great-looking Shooting Star Press.

The face team of Zayn and Neville was just thrown together to win this three-minute tag match. It would be nice if Zayn and Neville actually had a storyline because the fans love these guys, yet they aren’t doing anything.

The short matches continue with Truth getting the pinfall win after Titus was distracted by Goldust stomping on the ring steps. Why are wrestlers booked to be such idiots that react to the stupidest things? It insults the intelligence of the viewers.

Here’s another one-minute win for Strowman. The names for the opponents were in reference to Stephen Curry and Klay Thompson, aka The Splash Brothers for the Golden State Warriors, since Raw was in Oakland. Strowman once again asked for better competition, which will probably mean Mark Henry or Big Show.

This was set up in the opening promo on Raw. Banks is so popular that Reigns was cheered for much of the match, which is probably why WWE set it up in the first place. They likely figured that fans won’t boo Reigns as much with Banks in there and they were right to think that way.

The match ended with Banks tapping out Charlotte with the Bank Statement, while Reigns hit a Spear on Rusev to prevent a save attempt. It was an okay match, but nothing special. The crowd liked it, though.

Perkins won a non-title match against Daivari, who is the younger brother of former WWE star Shawn Daivari. Ariya was in the Cruiserweight Classic. Perkins won clean with the knee bar for the submission win. At least they didn’t have the champ lose non-title after he lost non-title last week.

This was covered earlier. It was one of the better Raw matches this year.

I’m going to modify this part this week because there was only one other non-wrestling segment worth talking about, since I covered the Goldberg stuff earlier.

Enzo & Cass were supposed to face Axel & Dallas, but the popular faces were attacked from behind by Luke Gallows & Karl Anderson. I like the idea of these teams feuding because New Day are facing Cesaro and Sheamus at Hell in a Cell, so they can have these teams in a match at the HIAC also.

It’s important that WWE has more than one tag team feud at a time so that they can build the division into something credible. I’m not really sure who’s going to win the rivalry, but I feel like Gallows and Anderson can use the boost more.

Looking Ahead To Hell in a Cell Here are the matches advertised for Raw’s Hell in a Cell show on Oct. 30 in Boston.

WWE Universal Championship: Kevin Owens vs. Seth Rollins in a Hell in a Cell match

United States Championship: Roman Reigns vs. Rusev in a Hell in a Cell match

Raw Women’s Championship: Sasha Banks vs. Charlotte in a Hell in a Cell match

Four out of those five matches are rematches of matches we have seen a few times already.

I thought it was a below-average episode of Raw this week. The Rollins/Jericho match was really good, so if you missed that, then it’s worth checking out. The rest of the show was boring or too predictable. I’m not sure why WWE think it’s a smart idea to have so many short matches all night long because if I was watching this show without writing about it, I would have hit fast-forward several times. Raw should be a more compelling show.

Next week on Raw, Goldberg is back. Is a 49-year-old man returning to WWE considered fresh? He probably is, which is an example of WWE’s current problems. They can’t make enough of their own stars, so they keep bringing back names from the past. I’m optimistic that Goldberg’s return will work out, but there’s a good chance it bombs too. We’ll find out together next week.