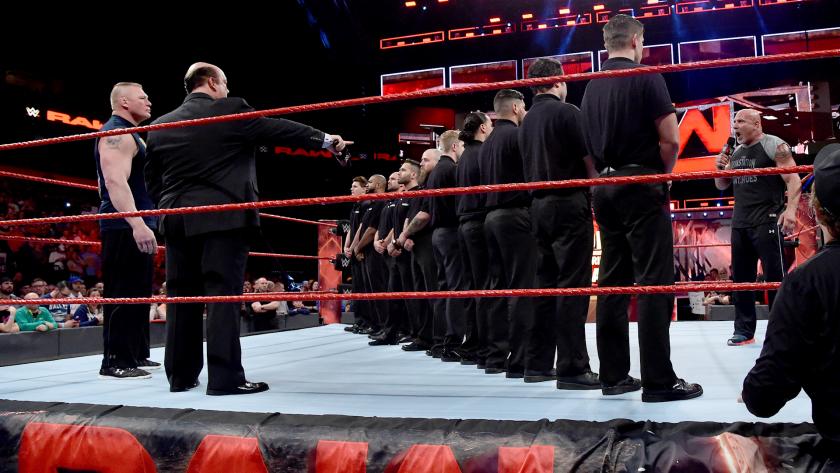 This week’s Raw was about two important segments. It was Brock Lesnar and Bill Goldberg meeting up face-to-face and then the main event segment featuring the “Survivor Series Summit,” as WWE called it.

I thought both segments did a very good job of getting people more excited about the two main matches at Sunday’s Survivor Series.

The Goldberg-Lesnar segment saw them enter the ring at the same time. There were a bunch of guys in the ring that were standing diagonally across the ring in order to split the ring into two and split them up in half.

A few weeks ago in Minnesota, WWE wanted Lesnar to get booed even though that was a state where he spent a lot of his life. The segment ended early because it was a disaster. This crowd in Buffalo was a lot different because they chanted “Goldberg” for much of the segment.

I liked that every time Paul Heyman, Lesnar’s advocate, tried to do his “Ladies and Gentlemen” line, Goldberg cut him off to tell him to shut up. Goldberg’s promos were never his strength in the prime of his career, but he did an excellent job in showing anger towards Heyman. He made it clear he didn’t care what Heyman had to say because he just wanted to fight Lesnar.

The question going into this was, would they brawl or just have a staredown? It ended up being a staredown. Goldberg tossed around some of the security guards (they are just indie wrestlers) and cleared the ring so he can face off with Lesnar. It led to Lesnar taking off his shirt, teasing an attack… and then walking away. No physical contact.

There are probably some fans that were mad about no brawling from Goldberg and Lesnar. I don’t mind it at all, though. If people want to see them fight, get Survivor Series on Sunday night. It makes sense to me.

I thought Goldberg’s performance was great. I’m saying that as a guy who wasn’t always a huge Goldberg fan. I’ve been critical of him over the years because I don’t even know if he likes being a pro wrestler. To his credit, he nailed it with the promo, the crowd loved him for it and he looked to be in great shape at 49 years of age.

Regarding the placement of this segment, it was done at the top of the third hour. This was around the time when the NFL Monday Night Football game went to halftime. I think it’s better to put a major segment like this in that spot, instead of putting it in the main event of the show because the audience tends to go down later in the show.

I’m leaning towards a Lesnar win at Survivor Series. I’ll get into more in the Survivor Series preview that I’ll post right here at The Comeback (cheap pop) later in the week. The “main event” featured a promo fest that ended with a predictable Raw vs. Smackdown brawl.

It started off with Raw’s Stephanie McMahon and Mick Foley talking trash to Smackdown’s Shane McMahon and Daniel Bryan. There was a lot of bickering with each side talking about how their brand is superior to the other. I kept waiting for them to say or do something to make people care about Survivor Series more. Instead, it was just a lot of arguing until the wrestlers walked out there.

Team Raw walked out together. That was Kevin Owens, Chris Jericho, Roman Reigns, Seth Rollins and Braun Strowman. They teased some kind of attack on Shane and Daniel, but then Bryan brought out the guys for Smackdown’s team: AJ Styles, Dean Ambrose, Randy Orton and Bray Wyatt. Shane is the fifth man on the team.

There were promos from some Raw guys and some Smackdown guys. The trash talk from Kevin Owens to AJ Styles was good, then Styles fired back to say that Owens was too close to the “sugartit” of KO’s best friend Chris Jericho. That led to Jericho putting Styles on “The List,” as well as the soccer mom hair that Styles sports and even the Smackdown team “mascot” James Ellsworth. Bray Wyatt went up to former Wyatt Family member Braun Strowman. He was disappointed in him for siding with these Team Raw guys. The reality is that Braun never turned on Bray, he was drafted to Raw and won his spot on the team. Orton stepped up to prevent Braun from getting his hands on Bray. It’s going to be interesting how they book Bray and Braun at Survivor Series or if they avoid doing anything between them.

Things turned into a brawl when Ambrose attacked Jericho with a punch to the head. That led to everything getting broken down with some guys hitting signature moves. The big spot was the Smackdown guys were out of the ring and Rollins hit a Pedigree on Styles. That led to Reigns launching Styles over the top to the floor so that he landed on the guys on his team who were outside the ring.

It was a good segment in terms of being an entertaining brawl. I just don’t think fans care about Raw vs. Smackdown that much. There’s nothing on the line, no rewards for the winners and the brand split only happened four months ago.

If Raw loses at Survivor Series, should fans care? No. We aren’t just fans of one show. Most of us watch both shows, so there isn’t a case of fans favoring one side or another. That’s why WWE could have done more to make us care. With that said, I think it will be a great match on Sunday and I hope there are some major angles that take place that make it a memorable match.

Owens and Reigns were put on the same team by Stephanie McMahon and Mick Foley. It was a competitive match with both sides coming close to winning, but in the end, it was Owens getting the pin after Reigns hit a Superman Punch on Sheamus. Owens was knocked out by a Brogue Kick, so good guy Reigns did the right thing by helping his team get the win. It made Owens look like a joke, which is bad since he’s the Universal Champion.

A quick win for Zayn. He’s facing Dolph Ziggler for the Intercontinental Title, so it gives him a win heading into that match. So much for Bo Dallas getting a mild push.

I thought this was the best match on the show. It was good, but not great. Strowman was booked really well as the big guy who dominated much of it. Once he got a tag match late in the bout, he destroyed Big E and Kingston on the floor. Then Jericho tagged him in and Strowman hit a running powerslam for the win. The best thing about it is that Strowman continues looking like a dominant performer. That needs to continue for the next several months.

This was non-title, so it was a surprise that Kendrick actually won, since champions lose non-title so often. The crowd was dead for the match that received 12 minutes, which is longer than what they usually do. They have done these great tag matches that were rushed in five minutes, yet here we get a dead match getting more time. Kendrick faces Kalisto for the Cruiserweight Title at Survivor Series on Sunday.

Boring match. Very predictable finish where Banks made Fox tap out to the Bank Statement. Jax was protected by not having her take many bumps. Charlotte and Banks fought each other at one point, but they still managed to win.

Another boring match. The loser teams were on the same side, so of course they got the win. At least the ending was funny when Gallows teased a tag to Enzo and then ended up winning the match for himself.

I’m going to skip the “Other Key Items On Raw” section this week because I already covered the important segments and nothing else really stood out.

Looking Ahead To Survivor Series

Here are the matches advertised for Survivor Series, which takes place this Sunday, Nov. 20 in Toronto.

Intercontinental Championship: Dolph Ziggler vs. Sami Zayn (If Zayn wins then IC Title goes to Raw with him)

Cruiserweight Championship: Brian Kendrick vs. Kalisto (If Kalisto wins then the Cruiserweight Division goes to Smackdown)

This week’s show was better than the last few weeks, thanks to the Goldberg/Lesnar and main event segments. Both of them were well done, but neither segment made me that much more excited about Survivor Series. The matches felt uninspired because it was just a lot of tag team matches where they kept telling the stories of partners not getting along, but finding a way to win. Raw doesn’t feel exciting anymore and that’s a problem that WWE has to fix sooner rather than later.

Survivor Series takes place this Sunday night, Nov. 20, on WWE Network. I will have a full in-depth preview of the event later this week.