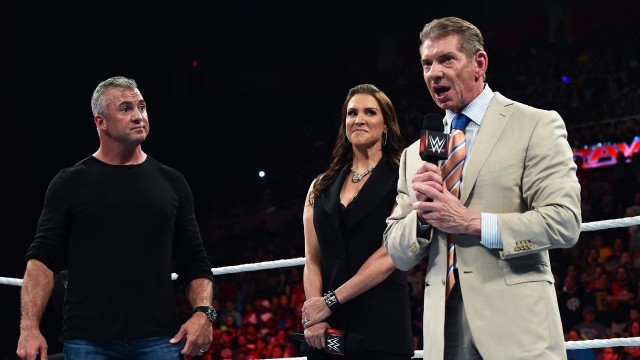 The business of professional wrestling and the business of the WWE are, for the most part, one and the same. They’ve outlasted and absorbed all of their major competition over the years (WCW, ECW) and far surpass the reach of any of their current competitors (Lucha Underground, TNA, ROH). By all accounts, there is nothing standing in the way of success for the world’s top pro wrestling company.

That is, except Vince McMahon.

The 71-year-old majority owner, chairman, and CEO of World Wrestling Entertainment has built the company into what it is today. But it’s long been thought that his old school ways were what ultimately holds it back from becoming the best version of itself, be it on camera and on the stock market. Ian Frisch recently wrote a catch-all piece about WWE for Vice Sports that delves behind the scenes of the company’s television product and business affairs. While many of these details are well known on their own, put together they help paint a picture of a company that has all the potential in the world but can’t quite seem to get out from under the shadow it’s biggest personality casts.

While there are certainly plenty of juicy tidbits in the piece, it’s the look at hard financial facts that seems to tell the strongest story. McMahon’s affinity for lying about numbers and hyping expectations on his shows (announced attendance at Wrestlemania 101,763 was actually  between 74,000 and 86,000) is what seems to get him into trouble with the stock market.

Take, for instance, the launch of WWE Network in 2014. The company touted a desire to hit the million subscriber mark within three months. When they actually announced the network had 667,287 subscribers, they’d already undercut themselves and “stunned the market.”

Next came Vince promising shareholders that he would double cable fees in a new TV-rights deal for Raw, SmackDown, and other WWE programming. Eventually, the deal with NBCUniversal was announced at $813 million over four years, which was a big increase, but not  the doubling he’d promised. Afterward, WWE’s stock dropped 43 percent and Vince reportedly lost $357 million.

Since then, the ship has been righted. If Vince is good at making messes, he’s also good at cleaning them up. WWE Network remains the company’s big venture and the thing it’s counting on to drive revenue in the future, but as Frisch dug deeper into the numbers, the less appealing they sound.

The good-sounding news is that WWE had 1.51 million paid network subscribers and took in $92 million in revenue during the first half of 2016. But buried under those numbers, Frisch found that the network’s churn (subscribers lost) was making their gained subscriptions seem relatively small. WWE touts that it gained 625,00 subscribers in Q2 2016, but didn’t make mention of the 471,000 they lost, giving them only a 153,000 net addition. Furthermore, Firsch found that 67 percent of WWE Network accounts ever created have since been cancelled.

And then there’s the subscription fee for the network itself. While the $9.99 monthly fee is a good deal, that gives subscribers access to all pay-per-view events, most of which they were gladly paying upwards of $50 each to watch before. The number of subscribers isn’t even close to make up that difference.

Like with so many creative and in-house decisions, it all seems to come back to Vince McMahon’s way for doing things. As Firsch shows in many examples of hirings & firings and creative decision-making, Vince’s way is the only way for WWE. One wonders what the company could look like without McMahon’s iron fist ruling from on high. One also wonders what opportunities are being missed out on so long as that fist looms over everything they do.