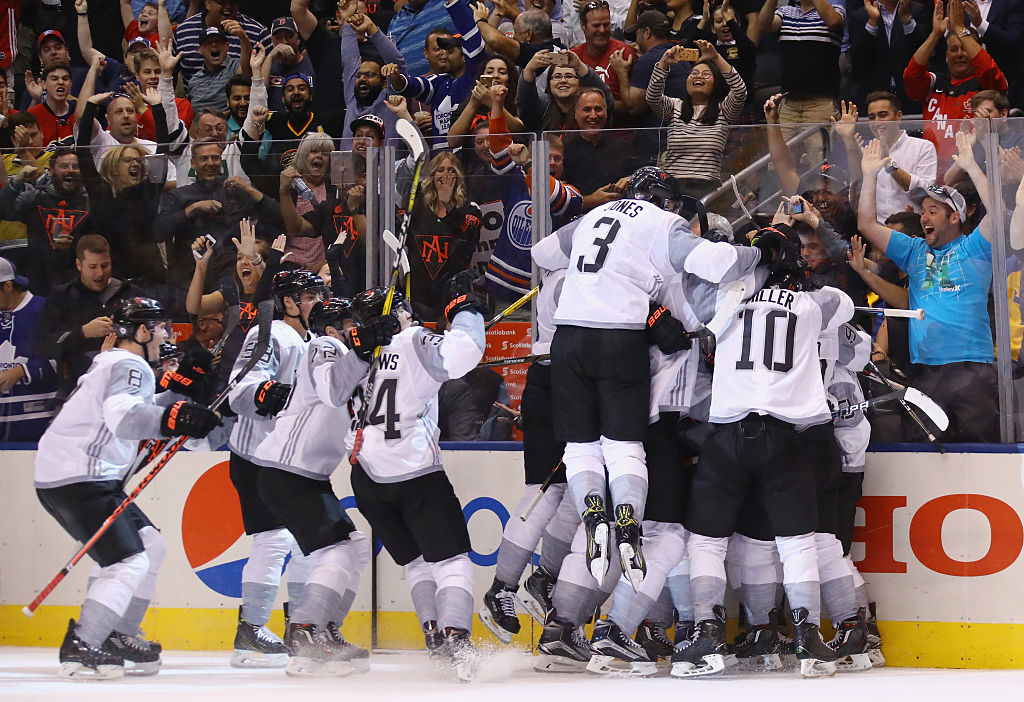 ESPN’s return to hockey broadcasting has been highly anticipated and celebrated, yet the ratings themselves have underwhelmed. While there is still plenty of tournament to go, the US’ early exit plus the competition the tournament faces from college and pro football down the line means the 766,000 viewers ESPN pulled for USA/Canada may not be topped. Whatever your feelings are on the “Hockey needs ESPN to grow” thought experiment, what is the NHL’s best route to grow hockey on TV?

For reference, NBCSN’s Wednesday Night Rivalry broadcast averaged 608,000 viewers this season, which is not bad by any stretch, though it doesn’t come near NBA or NFL levels. The non-USA/Canada WCoH games on ESPN and ESPN2 so far have averaged around 252,000 viewers (through September 21, excluding Canada/Czech Republic), which is not as good as what NBCSN averaged last season for their NHL broadcasts (they averaged 378,000 viewers across all windows).

This isn’t an apples-to-apples comparison of course, but ESPN’s presence hasn’t dramatically affected ratings to the extent that NBCSN and NBC couldn’t have matched them. But does that mean ESPN’s presence in broadcasting hockey couldn’t bring about an appreciable change to the sport’s ratings?

NBCSN has seen steadily, but slowly, improving ratings for the NHL from the days in which it was OLN, to Versus, and up until today. While that improvement isn’t as marked as say the NBA or NFL during that period, averaging 378,000 for a mix of non-exclusive and exclusive broadcasts is not bad on a network not as widely available. Would ESPN be able to do better? Potentially, depending on the time slots and networks the games ended up on, as when hockey was bumped from prime TV slots due to poker.

What differentiates the two networks is that NBCSN has built a large amount of its viewership base with hockey broadcasts, therefore a large part of its programming strategy centers around weekly and consistent NHL games. At ESPN, there is little chance NHL broadcasts would drive the schedule in the same way that college sports, the NBA, and the NFL do currently, meaning it is likely that NHL games would be bumped to less desirable slots on ESPN2 when NBCSN can still build entire schedules around hockey.

Is the World Cup of Hockey a good benchmark to judge what exposure ESPN would bring to hockey ratings? While it is a certainly odd tournament that has only started to catch broader love among hockey fans recently, it certainly gives a good idea as to how ESPN might juggle future NHL commitments with everything else they have under their tent.

And the World Cup of Hockey might only gain in prestige depending on whether or not the NHL heads to the Pyeongchang Olympic. This is the first edition of the World Cup since 2004, and Team USA’s outright terrible performance will certainly be a drag on ratings that might not exist in 2020. Plus, NBC’s bevy of commitment this time four years from now won’t be any different from this year and ESPN might be equally eager to get back into the hockey business then too.

What the early returns for the World Cup of Hockey on ESPN show is that they themselves aren’t the sole path to growth for the NHL and the game of hockey in the US. Saying that discounts what NBC and NBCSN have done to incrementally grow the game in their time with the sport as one of their critical properties. And while the NHL has seen plenty of good growth in their time with NBC, the fact that they are currently the only place on your remote to go for NHL coverage besides the NHL Network certainly hinders how much the sport could grow.

Could the sport grow even better if say ESPN and NBCSN partner up? It’s possible, but wouldn’t happen until 2021 at the earliest, when the specter of a lockout could be looming over the league.

The NHL’s ratings are nowhere near the rock bottom they were about 10-15 years ago, but they aren’t where many would like them to be either. ESPN’s World Cup of Hockey coverage hasn’t exactly set the world on fire, but there’s plenty of reason to believe they could have a place in ratings growth in the future.

But to say that Bristol is the only place for future growth seems short-sighted, especially now that the numbers don’t entirely back that theory up.