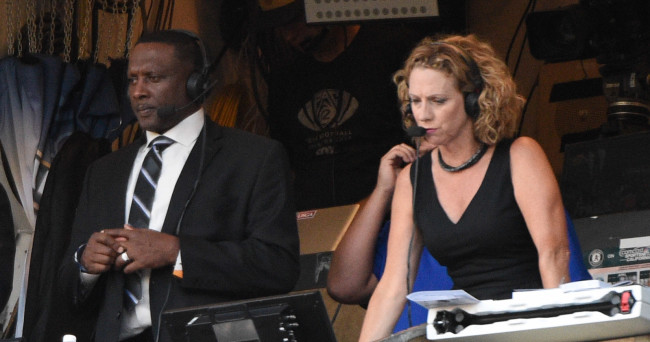 Over at SI.com, Richard Deitsch published a column Wednesday in which he spoke with women in sports broadcasting about the possibility of a woman calling NFL games on television in the near future.

The tone of the quotes seemed to be guarded optimism, as the women interviewed pointed to slow progress they’ve observed in getting women on football broadcasts.

Here’s Kate Scott, who just called a preseason 49ers game on the radio:

“I was expecting at least a small chunk of the ‘I don’t want a woman calling a man’s game’ reaction, if not the more vicious ‘Get the f— off my radio’ response,” Scott said. “But I can count on one hand the number of tweets I received that fell into either of those categories. On the flip side, I did get multiple tweets saying something to the effect of, ‘I wasn’t sure about a woman doing play-by-play, but you nailed it.’ So, progress? One can hope.”

Here’s an anonymous male executive (unrelated side note: Is this quote really vital enough to justify anonymity? Conversation for another day.):

“I would be surprised if it didn’t happen before the teens are over,” said the executive, who was given anonymity because he’s not the final decision-maker for his company. “The overarching issue is not many people—men included—set out to be play-by-play announcers anymore. They all grew up with SportsCenter and thus look at the anchor job as the plum. Any person calling games needs to have a command of the sport and a commanding voice and presence. Just like any other woman in a high-profile position, she will be under greater scrutiny than her male counterparts. We’ve seen women like Pam Ward and Beth Mowins do credible jobs calling football games—so in my mind it’s when, not if.”

“I would like to be optimistic and I think it will happen soon,” Druley said. “I’d like to think that if we can potentially have a woman be president, we can certainly have a woman do the NFL. I think America is changing, sports fans are changing and the NFL should honestly be the most accepting because women love the NFL. It is the reason I do the job I do. The NFL was the gateway drug for me. The question becomes: Is the audience prepared?”

Frankly, whether the audience is “prepared” seems kind of beside the point. First of all, women have called games in the NBA, MLB and college sports without the institution of American sports collapsing on itself, so I think the world could handle a woman calling NFL play-by-play. Second of all, you could give a newborn baby play-by-play duties for an NFL game and no one would turn the TV off, so even if narrow-minded men don’t want a woman talking about 3-4 blitzes and I-form packages, it’s not going to affect the ratings. Third of all, should we really hold people back because sexists and misogynists want us to?

In the SI piece, Scott makes an important point about the need for trail-blazers to break through and set an example for others. She describes meeting young women interested in going into sports media but unable to imagine themselves as anything other than sideline reporters because the only women they see on sports broadcasts are sideline reporters. Once a few more women join Mowins and Doris Burke as women in prominent broadcast roles, networks will begin to see more and more qualified female play-by-play candidates. At that point, it will be tough to avoid plopping a few of them into the booth.

There’s this widespread perception that sports fans just can’t handle women in certain positions, and we’ve seen that a little with Jessica Mendoza on Sunday Night Baseball and Burke on NBA broadcasts, but Scott’s experience suggests maybe America is more ready for this than we think.

On the other hand…

One thing that executives must prepare for is some viewer backlash. Druley referenced that despite how great Doris Burke is on the NBA, she still gets criticism on social media for every men’s sporting assignment she does. “It is my job to not listen to that,” Druley said. “I think we tend to push it here because we want to see progress but sometimes I’m not sure Joe Six-Pack is ready.”

Ok, but maybe it’s time for ESPN and to prioritize the capable and qualified women looking to break through in a male-dominated field over the proverbial “Joe Six-Pack” and his offensive and neanderthalic worldview.

Women calling NFL games seems inevitable at this point. Hopefully it happens sooner rather than later.