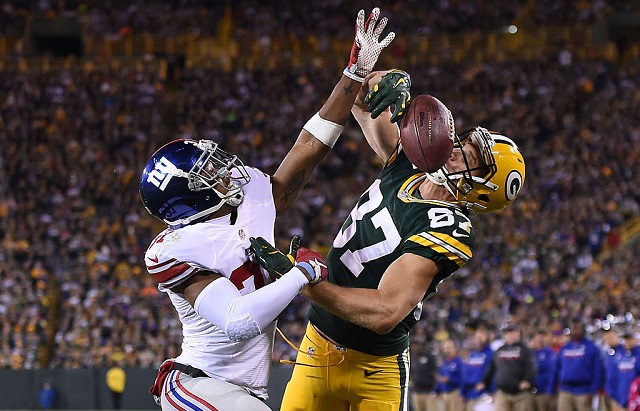 There’s been an endless amount of hand-wringing and finger pointing about the NFL’s 11% dip in TV ratings thus far this fall.

It’s Colin Kaepernick’s fault. No, it’s because of the presidential election. Wait, maybe it’s live streaming. Or the Olympics. Or the progressive sports media. Or the lack of brand-name quarterbacks. Or Deflategate. Or CTE. Or Ray Rice.

While some or all of these have obviously had an effect on viewership, no one wants to address the elephant in the room: The NFL’s on-field product just isn’t very good right now — and the root of the problem is the league’s never-ending greed.

No matter how big the NFL’s TV ratings and money haul were in recent years, it never seemed good enough for The Shield. Commissioner Roger Goodell openly stated in 2010 that his goal was to grow league revenue from $8.5 billion to $25 billion by the year 2027. That’s an average of almost $1 billion in additional revenue per year. As a result, the league and its owners have consistently squeezed every last dime out of its fans in the last decade at the expense of the game itself.

Since it started in 2006, Thursday Night Football has been endlessly panned for the poor play and bad games it routinely churns out. Asking NFL players to play two games in the span of four days is absolutely ludicrous.

Take this past Thursday’s game between Arizona and San Francisco. Carson Palmer couldn’t play because he didn’t have enough time to recover from a concussion the week before, leaving us with a showdown between Drew Stanton and Blaine Gabbert for a pair of 1-3 teams. Gee, why wouldn’t anyone want to watch that?

The games in London started in 2007 because of the league’s obsession with football becoming a global game like the NBA, even though the United States and Canada are the only countries that play it at any significant level. I watched the first London game because it was fun and different, but the novelty of it has long since worn off. Like Thursday Night Football, the London games have mostly been snooze-fests because changing the players’ weekly routines by traveling overseas, being paraded around London and having the Jacksonville Jaguars play there almost every year leads to bad games.

Like most Americans, I didn’t feel the need to watch a bad game between average teams at 9:30 AM sandwiched between a full day of college football and 10 hours of more NFL games. And I’m in the Eastern time zone. Did a single person on the West Coast wake up at 6:30 AM local time to watch the Jaguars and Colts? If so, may God have mercy on their soul.
But it’s not just the Thursday night and London games that are suffering from poor play. The entire league has a problem on its hands.

This was never more apparent than Super Bowl 50, possibly the worst-played Super Bowl of my lifetime. Yes, the Broncos played great defense. But it was also a miserable game full of unforced errors, penalties and turnovers featuring 11 sacks and zero passing touchdowns. The most memorable moment of the game was Cam Newton not even trying to recover a game-sealing fumble.

As noted by The Ringer, the rookie salary scale instituted in 2011 is largely to blame for the lacking on-field product. Because NFL owners were tired of giving huge contracts to unproven rookies, players’ initial four-year contracts were drastically reduced. The idea at the time was that this would result in more money for veterans —  but it hasn’t worked out that way.

“Let’s be honest, the younger the league, the less experienced the league is and with that, the quality of play doesn’t start off at the same level,” Packers head coach Mike McCarthy told The Ringer. “I think what you see, particularly in the early part of the season, is a reflection of that.”

Carson Wentz deserves all the credit in the world for garnering MVP talk in the first month of his rookie season, but what does it say about NFL defenses that he’s slicing through them with ease just months removed from playing against the likes of Western Illinois and Jacksonville State?

And then there’s the actual experience of watching a game. I’ve completely crossed off the idea of attending NFL games, which are cesspools of drunken goons fighting each other. But naturally, owners don’t do anything to curb the drinking at games because that would hurt their bottom line.

Watching from home isn’t much better. Thanks to endless commercials, games take forever. There’s no better way to kill momentum in a game than to follow up a touchdown with a touchback sandwiched between two commercial breaks, providing a gap of almost 10 minutes in real time between real game action.

Finally, there’s the NFL’s long-standing deal with DirecTV which provides a brutally sharp contrast with college football viewing the day before. On Saturdays, I can watch all of my alma maters’ games and dozens of other games on my basic cable package. That’s what allows me to flip between incredible finishes like in Week 5 when I flipped to the North Carolina-Florida State game just in time to see a 54-yard winning field goal as time expired and then, moments later, tuned in for the end of Tennessee-Georgia and the Vols’ Hail Mary.

I could never do that with NFL games, as I only get three day games on TV. And as a New York resident, two of those feature the Giants and Jets. If I want to get the NFL’s Red Zone channel to see all best finishes live, that costs me $50 extra. And if I want to watch my favorite team, I have to pay $270 for Sunday Ticket and watch all the games on my laptop.

And yet, instead of scaling back their cash grabs, the NFL continues to plow forward. On top of the three NFL games in London per season, the Texans and Raiders are playing in Mexico City on Nov. 21 for some reason. The NFL is determined to put a regular season game in China as early as 2018. The chatter about an NFL franchise in London grows louder every year. It’s only a matter of time until the regular season expands from 16 to 18 games — and possibly 22 games one day.

Through all this, NFL owners still have the gall to wonder, “What’s wrong with our viewers?”

The answer is that we finally wised up.