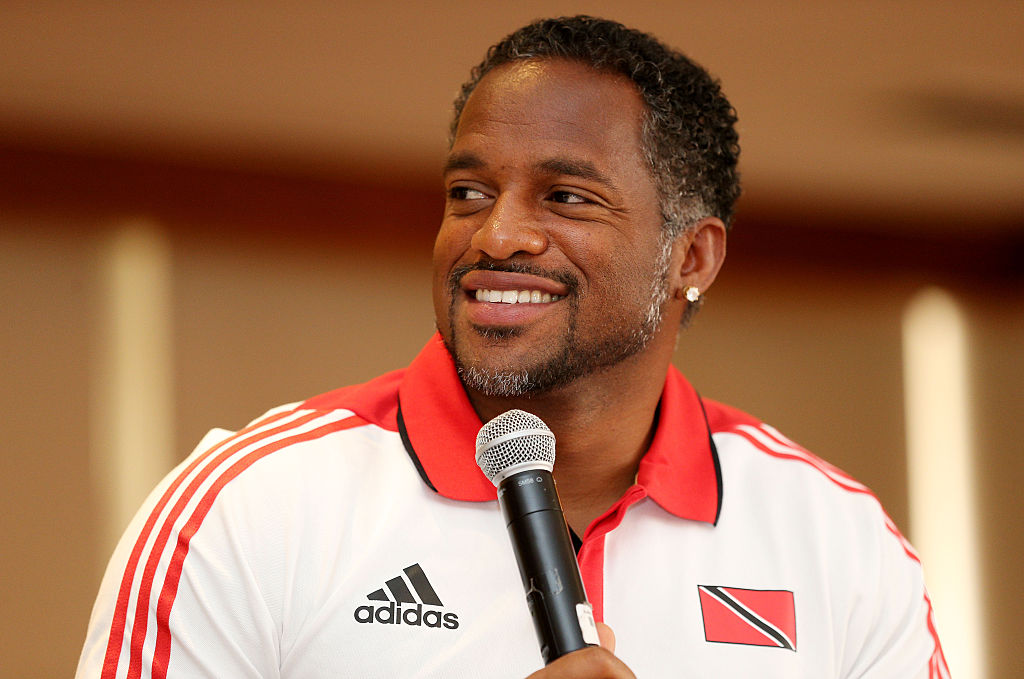 NBC is fortunate to have a number of great announcers working the Olympics.  From Dan Hicks and Rowdy Gaines calling swimming to Marv Albert and Doug Collins calling basketball (as well as Mike Gorman and Fran Fraschilla) to Leigh Diffey calling rowing.  Up and down the list NBC has some excellent voices to guide viewers through game action.  And that’s not to mention the who’s who of studio hosts they have who may be the most accomplished collection of sports media personalities working the same telecast (Rebecca Lowe, Mike Tirico, Dan Patrick, Al Michaels, and Bob Costas among them).

But if you were to pick one name who shines above the rest and deserves to be placed at the top step of the podium, it just might be track and field analyst Ato Boldon.

The former silver and bronze medal sprinter from Trinidad & Tobago brings an infectious enthusiasm for the sport and also backs it up with a masterful ability to provide both micro and macro analysis of each and every race.

We all know Twitter is the roughest critic for any announcer, but even on social media Boldon is earning heaps of praise.

Have thoroughly enjoyed the depth of knowledge and passion of @AtoBoldon on @nbcolympics #rio2016 #olympics Thank you!

i also appreciate that ato boldon actually provides helpful information in his commentary. listen and learn, swimming and gymnastics

What makes track and field a treat to watch? @AtoBoldon @SanyaRichiRoss and their awesome commentary #Rio2016 #Olympics #trackandfield

The entire track and field team deserves credit for enlightening and entertaining telecasts, and it’s been fun to see NBC play to the different strengths and experiences of their announcing teams.  Todd Harris and Trey Hardee have focused on providing commentary for the field events while Craig Masback has come in for distance races.  Sanya Richards-Ross has also been a nice addition to work with Boldon and veteran Tom Hammond in the main broadcast booth at Olympic Stadium.  Lewis Johnson has provided interesting interviews after the races as well.

Boldon is the focal point of the broadcasts though and you can see it when he’s given the stage immediately after the races are over to provide the context and significance to each event.  His predictive analysis isn’t bad either – he said before the Olympics that a world record could fall in the men’s 400 meters and it did.

Immediately after Usain Bolt won his third gold medal in the 100 meters, Boldon made his case for the sprinter to be put into the category of the best athletes of all-time.  It was a forceful, yet fact-based argument and lifted Bolt’s performance from just another gold medal in a sprint to something that could define his legacy.  It’s not often you see an analyst able to give that kind of elevated, big-picture viewpoint so clearly and so soon after an event had just transpired.

Boldon gets equally as excited and into the races that don’t involve the superstars as well.  He was right on top of the USA’s sweep in the women’s 110 meter hurdles and Dalilah Muhammad becoming the first woman to win the 400 meter hurdles, also meaning the USA had won a gold in each race on the Olympic track in the history of the games.

What sets Boldon truly apart from the rest of the Olympic announcers at NBC are those kinds of stats and information for all of the runners.  Personal best times, world championship performances, European championship performances, Boldon is an encyclopedia of track knowledge.  It’s just refreshing to hear someone who clearly cares so much about all the athletes and the events and not just the pre-ordained and pre-packaged narratives that NBC might choose to highlights.

Giving viewers that kind of context about all of the athletes should be what NBC does for every event.  Boldon’s track analysis is a far cry from the gymnastics arena, where viewers only get to see and know NBC’s hand-selected American stars and medal hopefuls.

Track and field may be a sport that only gets to be in the spotlight every four years, but if NBC can turn Tara Lipinski and Johnny Weir into crossover celebrity figures outside the Winter Olympic games, hopefully they can find more ways for Boldon to contribute to their overall sports coverage.  He’s too good to only hear on the big stage every four years.