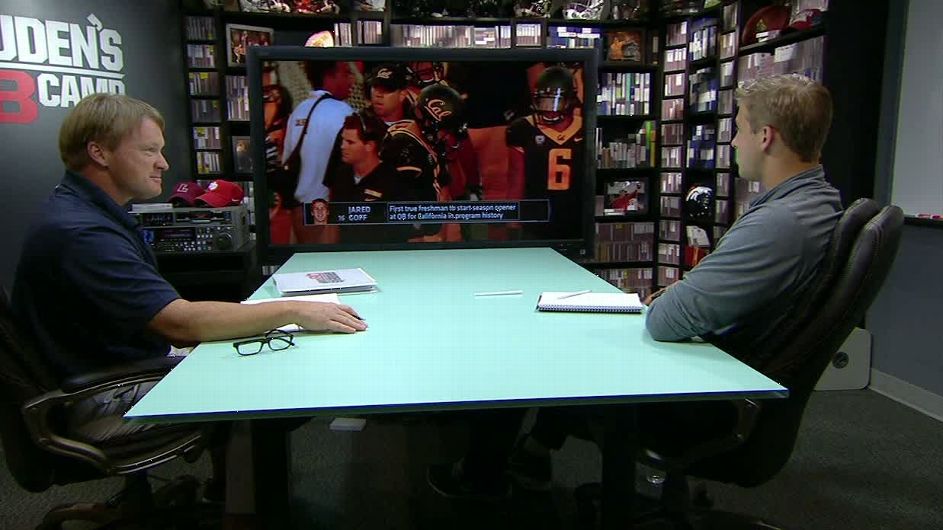 It’s become more than just a fun opportunity for Jon Gruden to dive into hilarious verbiage and show off his tenacity and love of football. “Gruden’s QB Camp” has blossomed into not only the most impactful way fans relate to the top quarterback prospects, but also a part of the process for some NFL teams that may be considering these quarterbacks.

This year, Gruden brought in seven quarterbacks to the show, getting to the heart of their football IQ, their strengths and what they’ve had to overcome, along with some on-field work. Some quarterbacks were able to help their perception, others weren’t able to take advantage, and some didn’t see their draft value altered all that much. But with NFL teams watching and fans forming their opinions, each quarterback had plenty to gain, and lose, during the time with the former NFL head coach.

Jared Goff didn’t need the help from Gruden, as it was clear the Rams had their sights set on him since the NFL Scouting Combine. But his football IQ may have won over the team’s fans and media coverage, as he displayed why NFL scouts felt he was the most impressive quarterback at the whiteboard in recent memory. While it’s thrown around too liberally with quarterbacks, Goff really does offer coach-like confidence in football IQ, which should help him overcome transitioning from the Air Raid offense (which hasn’t been conducive to NFL success) to a more pro-style offense. 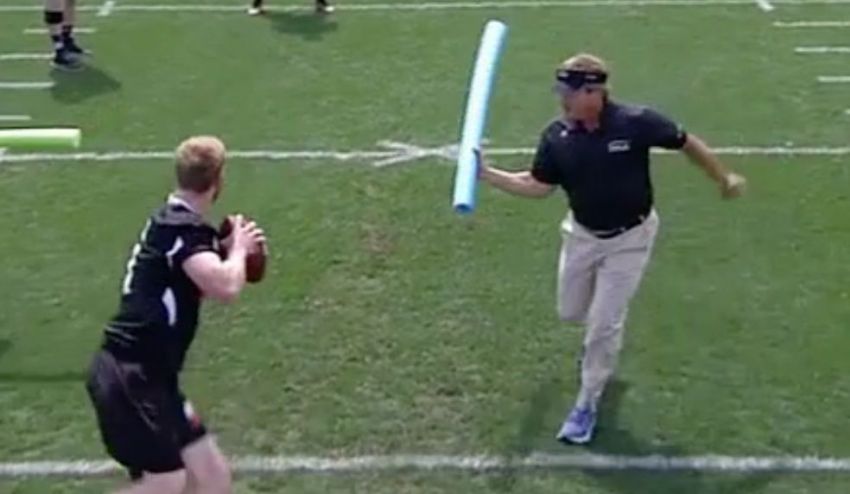 With as genuine and clean-cut of an off-field demeanor as you’ll find among recent quarterback NFL Draft prospects, Carson Wentz was always going to prove a feel-good prospect during his sit down with Jon Gruden. He held his own in play diagnosis (albeit a bit slow in recognizing his own play designs and calls at times) and proved he wasn’t at a steep disadvantage is football IQ despite hailing from an FCS program. While the throwing portion of the session is never overly helpful, Wentz got a chance to let his arm talent rip, and he built on his Pro Day to win on the eye test.

Jon Gruden did his fair share of touting Connor Cook’s college resume, winning record and experience in big games. And Cook deserves that recognition, which some NFL teams value highly as well. But Gruden didn’t deflect away from Cook’s character and leadership concerns, which I don’t believe Cook answered well enough. Supporters of Cook have used his big-game experience and longevity as a starter to claim his leadership concerns are overblown, which hasn’t proved effective. His leadership and off-field concerns are legitimate from what I’ve gathered, and many NFL teams have dropped him significantly because of that.

Playing third fiddle to the Goff/Wentz hype train, Paxton Lynch is a first-round prospect in his own right, and in my opinion, the best quarterback prospect in the 2016 class. Aside from my personal feelings, Gruden harped on how Lynch has grown over his three years as a program-saving quarterback at Memphis and the fundamentals that need to, yet easily can, be addressed. Also, Lynch addressed why he left and what he dealt with at Memphis in terms of coaching and supporting cast well, as he didn’t throw anyone under the bus yet clearly stated why it was time to move on. While Gruden didn’t give him the praise of other passers, I felt his appearance on the Gruden QB camp may have been viewed and considered by teams (such as the Browns, Bills, Jets and Broncos) on if he’ll be their first-round passer. 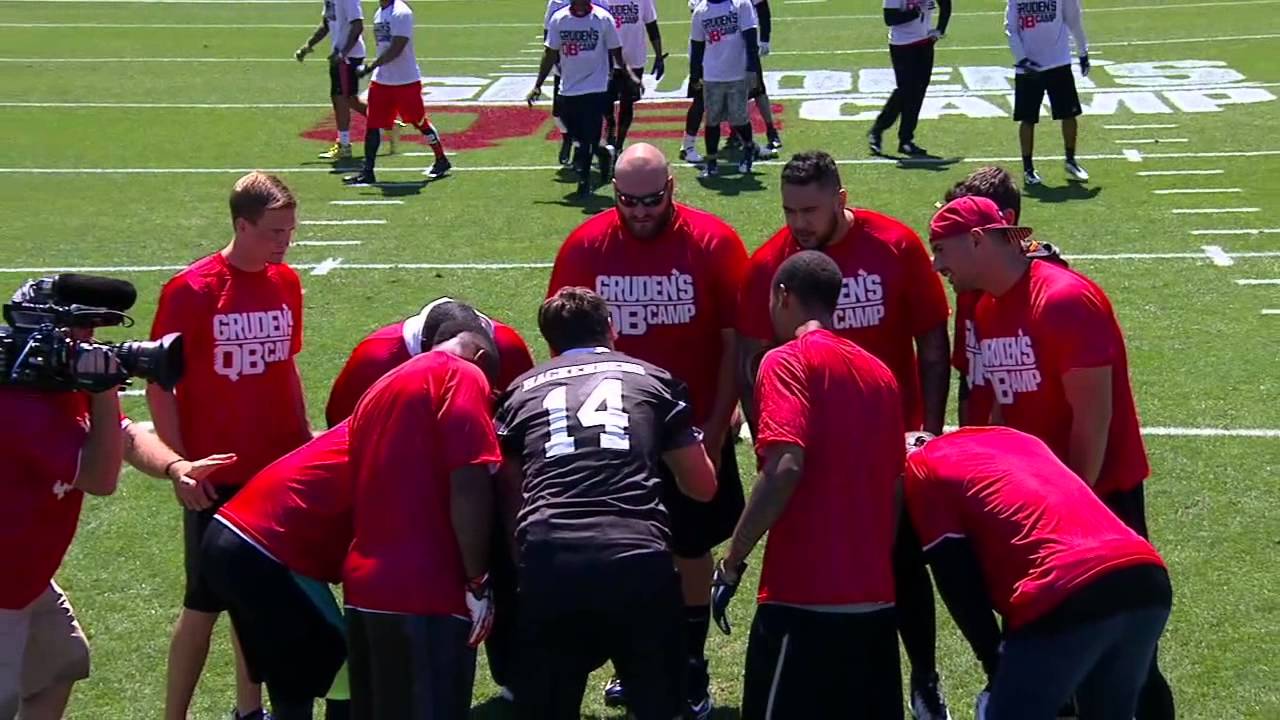 Hackenberg has detractors that cite to poor ball placement and a lack of development over the last two seasons, along with supporters that cite awesome football IQ and the build/arm talent that’s worth developing. Hackenberg’s discussion about his college offense mimicking the New England Patriots in pre-snap and audible control along with Gruden pointing out poor coaching by James Franklin’s staff both likely helped Hackenberg. However, I don’t think his work in the Gruden QB Camp will sway teams on either side of the fence, but it did do plenty to show just why some teams are smitten with Hackenberg’s upside and potential.

While it wasn’t a huge step down in his draft grade, Gruden’s consistent feeling that Jones will really need to focus and work hard in the NFL pointed to the main concern teams have with Cardale Jones: his work ethic. His issues early in his Ohio State career landed him at third on the depth chart entering the 2014 offseason, and teams may wonder if he’ll ever hit his Ben Roethlisberger-esque upside. That said, I’d assume he’ll be a second-round pick to a team excited for his long-term potential.

Considered the clear seventh-best quarterback among the attendees, Prescott still has a strong chance to be a top-75 draft pick. Likely the fallback upside option for a team that misses out on one of the top-tier quarterbacks, Prescott’s draft value lies in his 2015 development, mental makeup, and flashes when he was able to get in a groove on offense. His Gruden QB camp focused on the positives of winning but also missteps, misreads and mis-throws that are abound on film. Prescott is valued due to his upside and potential to manage an offense capability. Despite no change in how teams should have felt after his appearance, I think Gruden and he fleshed out why he’s not like Tim Tebow and Tebow’s struggles shouldn’t impact Prescott’s value.