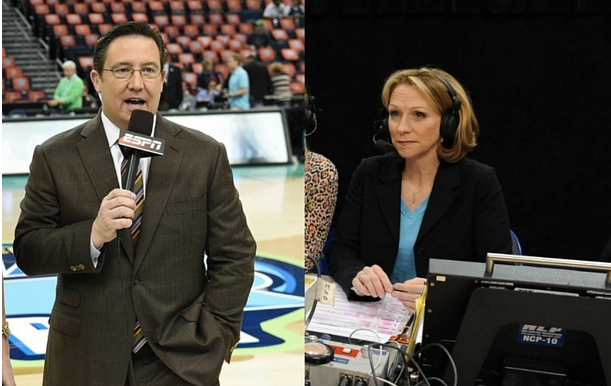 It’s not unusual to see sports events moved around or cancelled thanks to weather, but it’s a little more unusual to see commentator teams changed as a result. That’s going to happen for ESPN’s coverage of the Women’s Final Four, though, with the network announcing Friday that Beth Mowins will take over play-by-play duties for Dave O’Brien on games Sunday and Tuesday thanks to a potential weather-driven conflict with the Boston Red Sox’s (where O’Brien’s the new play-by-play man for NESN’s regional coverage) opener in Cleveland Monday. From ESPN senior vice president Tina Thornton at ESPN Front Row, here’s an explanation for the change:

Versatile play-by-play commentator Dave O’Brien was scheduled to call his seventh consecutive Women’s Final Four on ESPN from Indianapolis, alongside analyst Doris Burke and reporter Holly Rowe. The National Semifinals are Sunday night followed by the Championship Game on Tuesday. On the Monday between games, Dave had planned to head to Cleveland for that day’s MLB opener between Cleveland and Boston where he will make his regular-season debut as the new television voice of the Red Sox on their regional network, NESN.

That’s where the weather fun begins.

Monday’s forecast in Cleveland, originally calling for snow and steady rain, could put that opener in jeopardy, pushing the MLB game to Tuesday, the same day as the NCAA Women’s Championship.

In order to ensure the safest, most reliable outcome in serving sports fans, we have decided to assign play-by-play commentator Beth Mowins to call the Women’s Final Four games on Sunday and Tuesday. While Sunday held no conflict for Dave, we wanted to provide continuity, using the same person for all three games. Beth’s talent and experience on the sport made our decision easier.

Mowins has often called tournament games for ESPN and the Final Four for Westwood One on the radio side, so she has plenty of experience here, and it probably makes sense for the Worldwide Leader to make this call in advance rather than wondering about the weather and O’Brien’s availability. The release also notes Cara Capuano will sub in for Mowins on the softball event in Oregon she was originally scheduled to call this weekend.