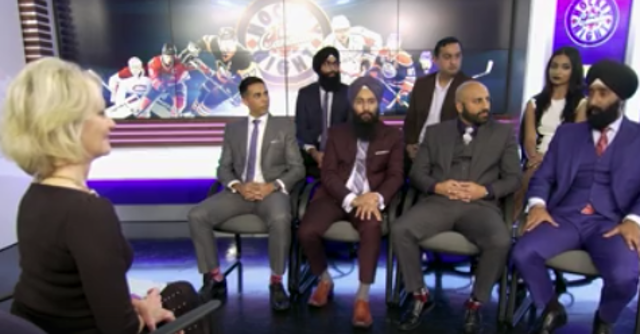 The Hockey Night In Canada Punjabi broadcasters have received significant international fame over the last year, starting with Harnarayan Singh’s viral “BoninoBoninoBonino!” call that spawned numerous interviews, including one with AA’s Alex Putterman. Now, they’ve been featured on HBO’s Real Sports with Bryant Gumbel. Here’s a short clip of their interview with Andrea Kremer, which will air at 10 p.m. Eastern Tuesday:

Singh has a particularly great line there describing his style: “One of the spices that’s used in curry is the masala, so we add a lot of masala to our calls.”

It’s cool to see Hockey Night In Canada Punjabi receiving some more international attention, especially from a show as prominent as Real Sports. It’s one of the most unique North American sports broadcasts out there, and it’s very well done. It’s great to see HBO pay attention to what’s going on with a very distinct Canadian hockey broadcast; it’s not the biggest sports story out there, but it’s a fun one to look into.

Wednesday’s episode of Real Sports with Bryant Gumbel airs on HBO at 10 p.m ET/PT, and will also feature a closing commentary from Gumbel on Phil Jackson, LeBron James, and “race-based code language” in sports.