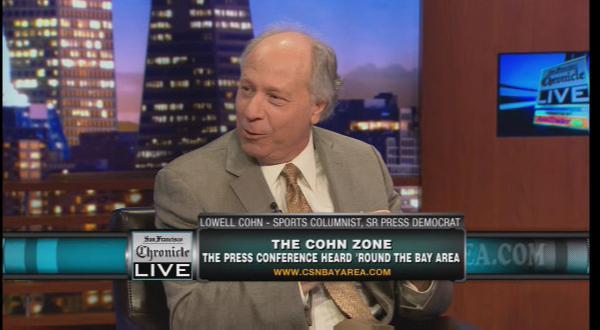 49ers head coach Chip Kelly answered some questions on Colin Kaepernick’s anthem protest at a press conference Thursday and expressed some support for Kaepernick and his stance, which then led to Santa Rosa Press-Democrat columnist Lowell Cohn trying to get Kelly to complain about Kaepernick, interrupting his answer, and arguing with him:

Chip Kelly and reporter have a back-and-forth on Kaepernick's activism (via @SakamotoRyan) pic.twitter.com/Tw0dTdVelm

Here’s Kelly’s first response on Kaepernick ( which took place before the video, via Deadspin):

Well, I think it’s an issue. You look at what’s gone on in Tulsa and Charlotte in the last two nights; it’s an issue that’s at the forefront of our country in that it needs to be addressed, it needs to be taken care of because what’s going on is not right. I think, again, he’s shedding light on a situation that is heinous and shouldn’t happen in this country. We all have inalienable rights as a citizen of this country and they’re being violated and that’s what I think Colin is standing up for.

Kelly responds “I don’t think Colin takes over any room…”

Cohn interrupts “Oh, he did. After the Rams game.”

Kelly says “Well, I can give you my opinion on what I think. I think he was asked questions and he was answering them…”

Cohn interrupts again “He should turn down them! And say ‘Talk to me at another time.’ I was in the room! Were you in the room at that time?”

Kelly says “Yeah, I walked by his locker.”

Cohn sarcastically says “Yeah. Anyway, so we disagree on if he took over the room. Do you think it’s appropriate that he should be talking about those things after a win?”

Cohn interrupts with a sarcastic “Okay!” before Kelly finishes “If he’s asked a question, I think he should answer what his feelings are on those questions. If you don’t believe that’s a thing, then maybe you shouldn’t ask him those questions.”

Cohn goes “I didn’t ask him those questions,” Kelly responds, “Okay,” then Cohn says “We have a fundamental disagreement then.” Kelly responds “Great part about this country, isn’t it?”

This seems like highly unnecessary behavior from Cohn, repeatedly interrupting and contradicting Kelly in such an argumentative manner. It also goes against the point of a press conference; the idea’s to ask legitimate questions and get quotes you can use in a story, not advance your own opinions. (That’s what you have a column for.) It’s not the first anti-Kaepernick thing from Cohn, though, as he previously wrote that the 49ers should have cut Kaepernick “for the good of the team” because he was “causing strife” and argued with Kaepernick’s mom:

Kelly handled this very well, though, calmly using logic against Cohn without rising to his provocations. Well played by him.