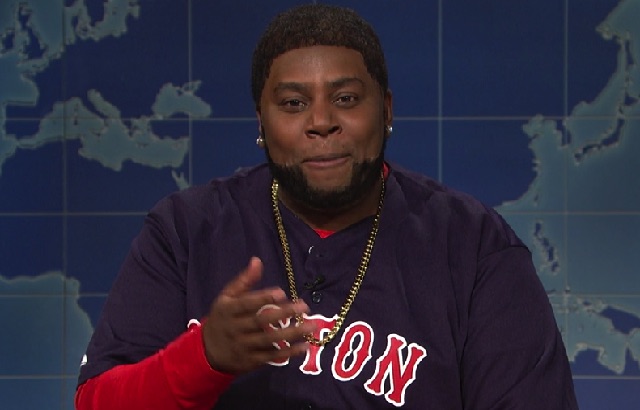 The Boston Red Sox visited Yankee Stadium for a three-game set with the New York Yankees last week, marking the last time designated hitter David Ortiz would play in the Bronx. Ortiz got a nice send-off from Yankees fans on what was essentially the last stop of his 2016 season retirement tour.

But did we hear much from Ortiz on what he’ll miss most about playing at Yankee Stadium? At the very least, we didn’t hear such a question asked by Colin Jost from Saturday Night Live‘s Weekend Update. Kenan Thompson made another appearance on the show as the Red Sox slugger, for what will probably be the final time.

Ortiz probably will have a lucrative career of endorsements following his baseball career, if he so chooses. So that was probably an astute observation from the SNL crew. Hopefully, the real Ortiz gets some better, legitimate products to endorse. Or perhaps he’ll still tour around the majors, enjoying his favorite lunches at the 30 ballparks throughout MLB. (Maybe he’ll skip the ones that he didn’t much enjoy.)

Without his baseball obligations, however, Ortiz will have plenty of time to get whatever kind of lunch wherever he wants to around the world. Maybe that could be his post-baseball career. Why should the likes of Anthony Bourdain, Guy Fieri and Andrew Zimmern get all the good food travel shows? Make room for Big Papi! Maybe Kenan Thompson can accompany him on a few of those trips too. (And maybe we can find out what Ortiz really thinks about Thompson’s fake Latin accent.)

Thompson’s version of Ortiz has some potential as a recurring character too, so maybe SNL shouldn’t be so quick to ditch him. Perhaps he can be a special election correspondent during the final weeks of the campaign, offering some insight and commentary regarding Republican candidate Donald Trump’s views toward Latinos and immigrants. Maybe the two can have lunch. (No taco bowls, please.)