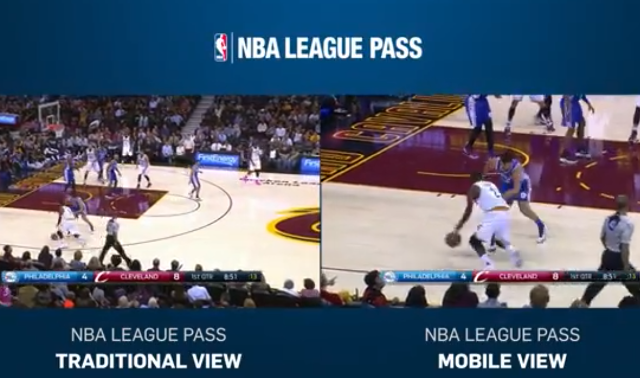 Having access to live sports broadcasts on your phone sounds great, but watching on a small screen can be a pain, especially as most modern broadcasts aren’t designed for a screen that small. NBA League Pass is planning to change that with its new NBA Mobile View, though, offering out-of-market broadcasts with a tighter zoom designed specifically for phones. Here’s a side-by-side comparison they released of the new look versus the old one:

This could be great, offering a product that’s much easier to watch on a smaller screen and thus boosting the value of NBA League Pass when you’re away from your computer or television. Those who prefer the old views and their wider shots of off-ball action don’t need to worry, either, as they’ll still be available for selection on mobile devices too. This is also an impressive investment by the NBA and Turner Sports (which have a partnership to run NBA Digital initiatives), with new cameras and a designated producer in each arena. There are further enhancements to League Pass coming this year, too, including pre-game footage and in-arena footage during timeouts and halftime. Here’s more from Turner’s release:

NBA LEAGUE PASS, which provides live out-of-market games to NBA fans, will offer a completely new way to watch basketball on mobile phones and tablets throughout the 2016-17 NBA season with the introduction of NBA Mobile View.  The new NBA Mobile View meets the needs of today’s sports fan and their desire to consume content on the best screen available by providing a zoomed-in, tighter shot of the action that is optimized for the smaller screen size of mobile devices.

Developed by the NBA and Turner Sports through their NBA Digital partnership, the new offering was created by installing new cameras in all 29 NBA arenas with each game having a designated producer specifically for NBA Mobile View.

In addition to NBA Mobile View, NBA LEAGUE PASS enhancements for the upcoming season include Turner’s iStreamPlanet providing the live streaming infrastructure for all games provided through the service.  iStreamPlanet is an industry leader in live video streaming with more than 15 years of experience and a history of supporting large sporting events.  NBA LEAGUE PASS will also broaden its content offerings with the video feeds being made available early enough to capture pre-game activity for the first time as well as in-arena footage during timeouts and halftime entertainment.

After the free preview, League Pass has a single-game option for $6.99, a single-team option for $119.99, and its comprehensive all-teams plus archival material season pass for $199.99. A subscription gets you access across TV, connected-TV devices, tablets and mobile phones. The release cites a record 26.7 million game views and more than 1.2 billion minutes viewed on League Pass last year, plus a 10 per cent year-over-year boost in subscriptions and a new high-subscription level. Given how many people think “The future of video is mobile and the future of mobile is video,” as AT&T put it this week, this kind of initiative to emphasize mobile viewing may boost League Pass even further. This will be well worth watching; if it’s successful, it may motivate other sports broadcasters to offer specific mobile-designed views.