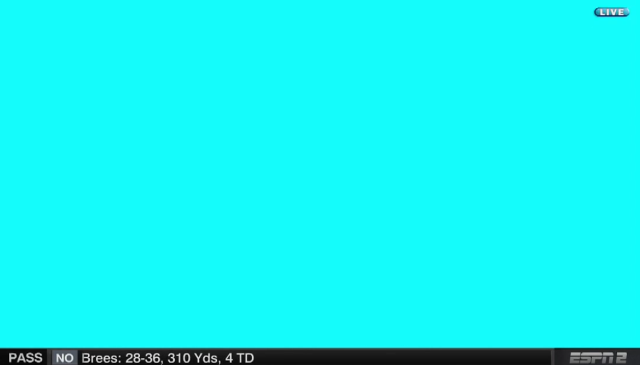 Update: A source at ESPN tells us that the feed going out was due to ESPN setting the window of the TSN feed to end at 10pm ET and didn’t anticipate for this long of a game. The feed seemed to give out at exactly that time as seen from the tweets below.

Sunday’s broadcast of the CFL’s Grey Cup championship game on ESPN2 ran into some remarkable technical difficulties in the fourth quarter. With under two minutes left and the Calgary Stampeders trailing the Ottawa Redblacks 33-30, but driving, ESPN2’s feed suddenly went from the game to a blank screen and to a set of commercials:

ESPN picks up the TSN feed for CFL games, but TSN’s own broadcast was unaffected. However, the feed reportedly also went out in the United Kingdom and in Brazil, so this may have been an international feed problem:

@AndrewBucholtz here in Brazil too.

@AndrewBucholtz Same here in the UK

It brought up plenty of criticism, and references to the Heidi Game:

@AndrewBucholtz so it wasn’t cause Heidi is on?

The feed then came back (but in SD at first) with Calgary in a first-and-goal situation:

The Stampeders settled for a field goal, and the Redblacks then opted to kneel and send the game to overtime. TSN’s broadcast (and thus, the international feeds it was sent to) chose to get in really close on the final kneeldowns, leading to some very audible televised f-bombs from the players:

In overtime, Ottawa won 39-33, ending the broadcast without further technical issues and producing the first Grey Cup win by a sub-.500 team since 2001.