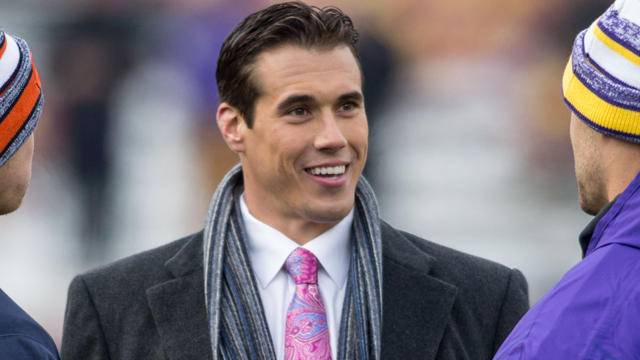 On December Sunday mornings, many are hungover and filled up from  holiday Christmas parties, or full of NFL game-day food. Letting out a belch or two is a time-honored tradition. The Fox broadcasting team of Sam Rosen and Brady Quinn (Quinn’s seen above) can relate.

While calling the San Diego Chargers-Carolina Panthers game Sunday, it appears either Rosen (who was doing play-by-play) or Quinn (doing color commentary), let out a burp while on the air.

Burpgate could end up producing one of the great questions of our time: was it Rosen or Quinn who let out the burp?  It could have been Rosen, who finished speaking and forgot to mute his mic, or Quinn, who was preparing to talk and wound up burping first. Both have been on plenty of broadcasts, though, so it’s surprising to see this. Could it have been a rogue burper from a grassy knoll? Let’s not discount sideline reporter Jennifer Hale either, she could have had a hot mic.

The Panthers took it to the Chargers, winning 28-16, so maybe this was a protest burp. The broadcasting crew could have been looking for a more exciting product to call and not the blowout in the Panthers’ favor. Or perhaps this was merely analysis related to Rosen’s previous comment of “How about the year Matthew Stafford’s having?” Maybe that comment deserved a burp.

Either way, it spiced things up for the viewers at home, and definitely made the broadcast relatable. But for the broadcasters, maybe they should lay off the spicy foods and sodas before game time. You never know when gas can be an issue.