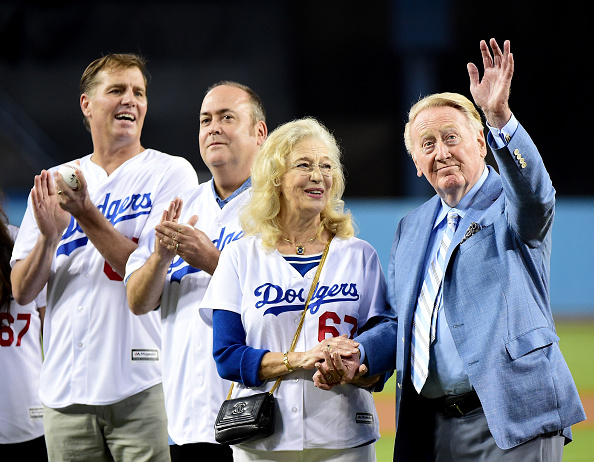 It seems like every network and MLB team is honoring Vin Scully this season, his final one as Dodgers play-by-play broadcaster. But while the team’s legendary voice certainly seems appreciative of all of these honors, he told SI’s Tom Verducci in a recent profile that all of the attention was making him uncomfortable because it was putting him ahead of the game.

“I guess my biggest fear ever since I started,” he tells me, “besides the fear of making some big mistake, is I never wanted to get out ahead of the game. I always wanted to make sure I could push the game and the players rather than me. That’s really been my goal ever since I started—plus, trying to survive. This year being my last year, the media, the ball club, they have a tendency to push me out before the game, and I’m uncomfortable with that.”

I think that’s an understandable viewpoint. Scully’s been deified over the last year, and getting all that attention when you just want to call the game must be a bit awkward.

The entire profile of Scully is excellent, and this anecdote about former Dodgers owner Walter O’Malley seems just a bit ironic considering the carriage issues currently plaguing the Dodgers and SportsNet LA.

O’Malley, in the name of capitalism, created another force that contributed to the cultural phenomenon of Scully. In Brooklyn the owner had televised virtually every Dodgers home game from 1947 through ’57. But in January of ’58, O’Malley told SI that “subscription TV will offer a solution to the problems that are plaguing many major sports.” The previous year he had entered into a relationship with a pay television company called Skiatron. Once in L.A., O’Malley no longer wanted to give away his product to viewers (even if technological and political hurdles would keep pay TV years away from being a viable option).

From 1958 to ’68, with only a rare excep­tion here or there, Dodgers fans in Los Angeles could see their team on television only in the nine to 11 annual games the team played in San Francisco. O’Malley blocked the national Game of the Week from the L.A. market, even when the Dodgers were on the road.

58 years ago, Walter O’Malley made it nearly impossible for Dodgers fans to watch their team without paying for a subscription television package. Today…well, maybe nothing has really changed all these years later.