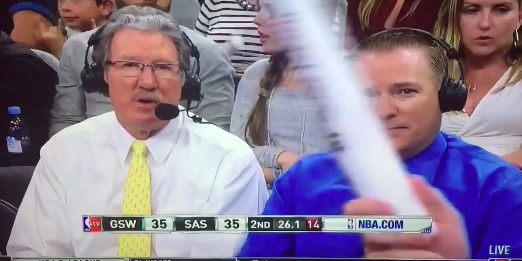 The Warriors and Spurs are playing what may be the most important, significant regular season game in NBA history tonight in San Antonio.  So if you’re a fan at the game, what better way to add to the history-making evening than acting like a goober next to the visiting broadcast booth.

NBATV was airing the Warriors feed featuring commentary from Bob Fitzgerald and Jim Barnett (one of the best local teams in the NBA it should be said) and during a timeout right before halftime, they went to an on-camera shot on the sidelines.  That’s when a fan or fans goofed off and tried to get a hand and a thunderstick in the frame.  That led to Fitzgerald calling the Spurs fans next to them “jerk off fans.”  So both Warriors fans watching on CSN Bay Area and fans around the country on NBATV got to see it.

You know a rivalry is getting good when it’s extending to the broadcasters and the opposing team’s fans.  And apparently you can say “jerk off fans” on NBATV and get away with it.

Although, it could be worse for the Warriors announcers, they could be stuck next to this fan in San Antonio.