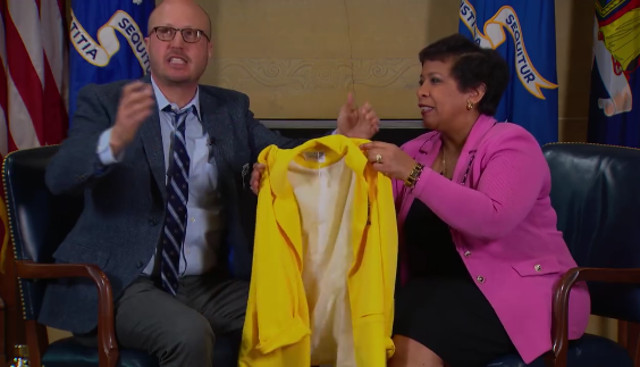 It’s not every day that the current Attorney General of the United States appears on a soccer show shot inside a “panic room,” but that’s what happened Monday night on Men in Blazers. Of course, Lynch didn’t actually appear in the small studio Roger Bennett and Michael Davies typically shoot their show from; the Lynch interview was a pre-taped segment with Bennett. Here it is (it starts at the 15:00 mark):

Lynch told Bennett that the FIFA indictments she announced last May were the culmination of a lot of work by a lot of people, and were a signal to the world that the U.S. wouldn’t overlook international corruption involving its financial system.

“I’m incredibly proud of the work that went into making a case like this, and so, it’s my job to highlight that, and I’m grateful for that opportunity,” she said. “I also think it’s important that the world see that when people do use the American financial system for corruption, the American justice system will take notice.”

Lynch went on to say that in that moment of announcing indictments, she was thinking about the uplifting elements of soccer as well as the negative ones.

“What came back to me was something that happened several years ago,” Lynch said. “In the early 2000s, I was actually in South Africa on business the weekend that they learned they had won the 2010 World Cup, and I saw how that whole action lifted not just the country of South Africa, but the continent of Africa. And certainly I’ve been in Europe when other important World Cup games have been played, and I’ve seen the importance to national pride, national spirit, and also the story that anyone, if they work hard and play by the rules, can succeed in this game of football. I remembered that moment at the time, and I thought, how unfortunate that South Africa’s wonderful moment had been sullied by corruption.”

Lynch said that South Africa hosted that tournament well, and that moment had her thinking of how important a clean FIFA was to the world during the indictment announcement.

Lynch goes on to discuss her parents and how they inspired her quest for fairness, as well as her childhood love of soccer, but a particularly good response comes when Bennett asks how she planned to handle criticisms of the U.S. getting involved, “a bit like the British police swooping in to arrest Tom Brady for Deflategate.” Lynch said the FIFA investigation was on such a different level and involved so much global wrongdoing that it was clear to the global populace it needed to be addressed, and that its heavy links to the U.S. financial system made them the right country to investigate.

“Actually, no, although I wasn’t happy with Deflategate either, but I think the NFL’s taking care of that one,” she said with a laugh. “But when you look at the integrity of sports, sports are what we use to teach our children about fair play, and playing by the rules, and how you get rewarded, and teamwork and sportsmanship, to see that corrupted was something that I think was deeply offensive to everyone, to Americans and to everyone in the world. But for us, we also saw that the financial corruption used the American financial system to a great degree. And, of course, some of the FIFA confederation offices are actually in the United States. We saw that they were actually using the U.S. financial system to carry out this scheme of corruption, and that definitely is something that cannot be countenanced.”

Bennett then asks Lynch if she has a message for Sepp Blatter, and she declines, but offers one for other officials.

“I don’t have a specific message for Mr. Blatter, but this message is for anyone involved in the great sport of football,” she said. “As I’ve said before, the reform agenda is one that we hope moves forward, and we hope that FIFA as an entity can get back to its pure goal and its pure roots of supporting the sport, supporting the children who want to play and grow and advance. Anyone who seeks to take FIFA back to the days of cronyism and bribery is living in the past and should not be part of FIFA’s future.”

That interview ends with Lynch talking about her desire to keep fighting for fairness. In a separate clip, Bennett also presented Lynch with the Golden Blazer:

It’s rare to see the Attorney General interviewed seriously on a show that’s usually much lighter and filled with jokes about ravens and pies, but Bennett handled this interview well, and Lynch had some very interesting things to say. Kudos to both for pulling this off.