You can now watch live coverage of Wimbledon on Twitter. That is, if you can find it.

Twitter did a very soft launch of it’s live-streaming tool on Wednesday just in time for the men’s quarterfinals. However, they didn’t promote it at all. When tennis fans searched the hashtag #wimbledon, they found plenty of tweets but not the live coverage. Eventually, the official Wimbledon Twitter account tweeted the link and pinned it for a brief while until that link was curiously removed a short while later.

Per TechCrunch, the best way to watch the coverage is to bookmark the link and hope for the best.

The product clearly remains in it’s infancy, hence the deliberate squashing of public consumption as they fine tune it. Presently, the entire setup consists of a video box (featuring ESPN’s broadcast) with options to follow the Wimbledon and ESPN Twitter accounts below it and a curated Twitterfeed to the right. Mobile readers will find the feed below the video. 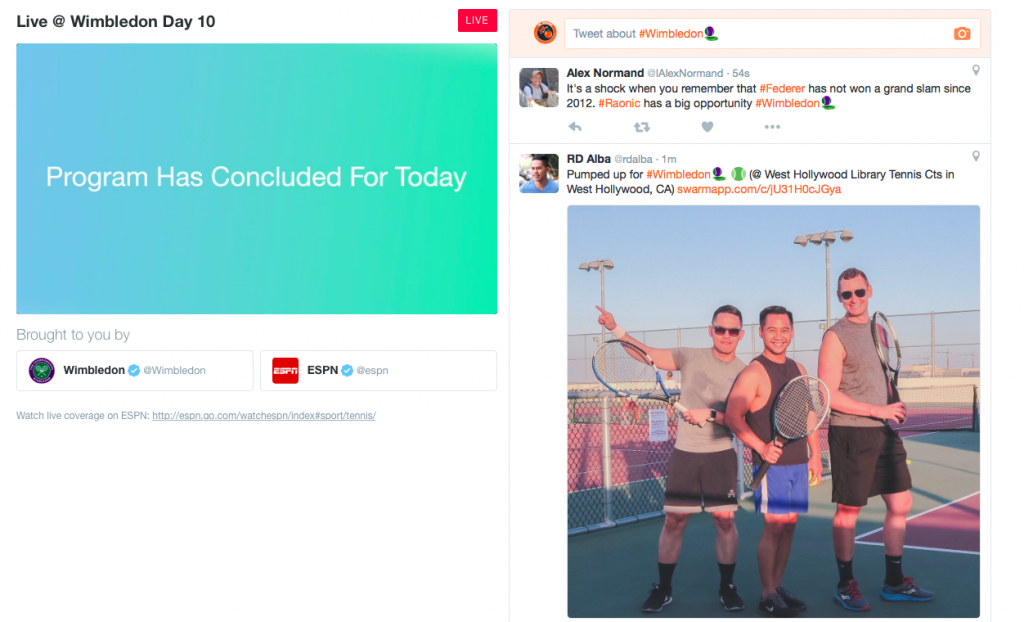 A lot of the subdued promotion probably also has to do with the fact that there isn’t too much “live” in that live-streaming. The broadcast is actually the same thing you can find on Wimbledon.com, which is mostly interviews, commentary, updates and select match coverage. If you want to watch all live matches, you still have to go to ESPN since they have the exclusive streaming rights.

Plus, many of the accompanying tweets might not really do much for you. It’s one thing to read a stream of tweets from people you’ve chosen to follow. It’s another thing to follow a stream of tweets from strangers whose opinion you don’t care about or who add nothing of value to your viewing experience. Having the option to see your own feed instead of their curated one would probably go a long way to improving the experience.

Because the product feels incomplete and doesn’t seem to add much value, those who have tuned in haven’t come away too thrilled.

The more glaring shortcoming is that live video coupled with a stream of unfiltered Wimbledon-related tweets simply doesn’t add up to more than the sum of its parts. In fact, on balance, it’s an annoying, confusing muddle of random chatter. It’s like you’re sitting in the world’s biggest sports bar, with random strangers blustering or snarking in your ear.

While Wimbledon is a big deal in it’s own right, Twitter is probably much more concerned with the upcoming Thursday Night Football games they’ve purchased the streaming rights to during the 2016 season. It’s likely they’re testing out the live-streaming capabilities against a smaller audience so that they’re more prepared to deal with the massive one that will tune in and tweet in for the NFL.

A rep told Variety as much, saying “This livestream is an extremely early and incomplete test experience, and we’ll be making lots of improvements before we launch it in its final form.”

Twitter has also said it’s interested in live-streaming other sports and pro leagues as well. If the idea of cutting the cord and watching more sports live on Twitter appeals to you, sit tight while the social media service fine-tunes it’s live-streaming capabilities, which should only improve over time.

As for tennis fans looking for the option right now, it’s there. So long as you can find it.