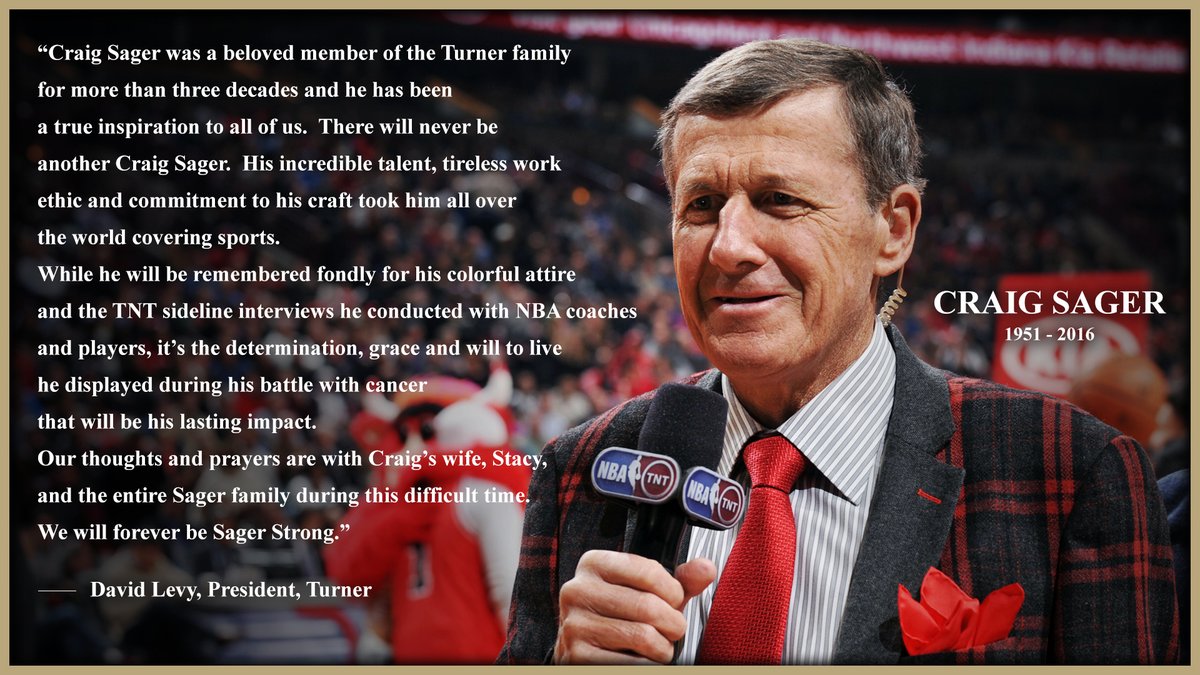 Legendary Turner Sports broadcaster Craig Sager’s passing at 65 Thursday after a long battle with acute myeloid leukemia has sparked tributes from across the sports world. Here’s how some sports channels delivered the news, starting with Trey Wingo on ESPN:

That leads into this tribute video from Turner Sports’ Ernie Johnson:

Rachel Nichols delivered the news, as well as a touching personal tribute to Sager (who she worked with at Turner for three years) and condolences to his family, on ESPN2’s The Jump, with Brian Windhorst and Tracy McGrady also offering thoughts:

And Michelle Beadle got emotional on ESPN’s SportsNation:

As for the NBA themselves, commissioner Adam Silver sent out a statement with his own tribute to Sager and confirmed that teams will observe a moment of silence in Sager’s honor:

NBA commissioner Adam Silver's statement on Craig Sager plus info that teams will honor Craig with a moment of silence: pic.twitter.com/S3n1avPowZ

#Spurs coach Gregg Popovich was shaken up on the passing of Craig Sager. Didn't take any questions afterward. pic.twitter.com/cHvzH3R8vb

As did MLB legend Hank Aaron, who Sager famously interviewed after Aaron set the home-run record:

Craig Sagar was there when I crossed the plate for #715 & has been a friend ever since.I thought the world of him & he will be sorely missed

As did Blazers’ guard Damian Lillard:

And the whole Celtics’ team:

Many other current and former athletes offered their thoughts as well:

Craig Sager thanks for saving my life when I was in dire need of help in Detroit back in 1993. Condolences to your family. RIP my friend.

The sports community lost a good man and talent today. RIP Craig Sager. Thank you for your inspiration and spirit. #legend pic.twitter.com/Mec0nk84F2

“Time is simply how you live your life.” – Craig Sager. So grateful for the time you shared with all of us. RIP my friend #sagerstrong

There was nobody like Craig Sager, and the sidelines will never be the same without him. Rest In Peace, Craig. #sagerstrong pic.twitter.com/0sggNIb8Vk

RIP to the Legend Craig Sager

RIP Sager… Was always great to see him arriving at work! Left his mark on the game! Rest up

Craig Sager brought so much enthusiasm to the NBA game. But his fight to the end is what really impressed me. RIP to an inspiring man.

“Craig Sager Statement from ESPN President John Skipper: “Our thoughts are with the Sager family and our friends at Turner Sports. Craig was a universally respected and beloved reporter and a one-of-a-kind personality. His memorable ESPYS speech demonstrated his exceptional strength and a relentlessly positive energy that inspired millions of us.”

Words can’t explain how honored, humbled, and excited I was to be interviewed by a legend like you at this moment. The sports world will never be the same without you. #RIPCraigSager

And many journalists and broadcasters offered their thoughts as welll:

Rest In Peace, Craig Sager. What a valiant and inspirational fight. May his good work continue as his legacy. Prayers for all loved Craig.

There is just no better person, colleague and friend…my thoughts and prayers are with his family and our Turner sports family #SagerStrong

Plus those outside sports:

RIP Craig Sager. You always brought joy, on the sideline & in life!!

Craig Sager thanks for saving my life when I was in dire need of help in Detroit back in 1993. Condolences to your family. RIP my friend.

Bob Costas pays tribute to the life and career of Craig Sager after the legendary broadcaster died on Thursday at 65. pic.twitter.com/3LbrjkRp7Z

We’ll continue to add more tributes in as they come.