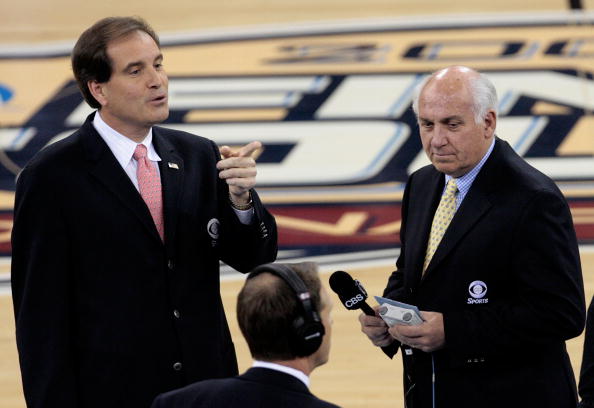 Since 1969, the NCAA Tournament has been broadcast on national television. Over the years, we’ve seen many men and women bring us the buzzer beaters, the fantastic finishes and the exciting action that has made March Madness what it is today.

Whether it’s been on NBC, ESPN, CBS, TBS, TNT or truTV, we’ve watched the games and we’ve appreciated the announcing teams especially when they’ve been good. There have been some bad announcing teams too, but we’re not including them in this post. Maybe that’s for another day.

So without further delay, here are the Top Sixteen announcing teams of the NCAA Tournament. This is a straight listing, no regions or Final Fours here:

This is due to seeing Mike and Ron call many Big East Network games in the Northeast in the 1980’s and 1990’s. Mike, who is known more for calling Boston Celtics games on Comast SportsNet New England, called his share of college basketball games in the 1980’s and 1990’s. First calling Providence College games, then moving to the Big East Network and then ESPN on Big Monday games teaming with Bill Raftery.

Perry, a former Holy Cross standout, has called games into the 21st Century for a variety of outlets including ESPN Regional and the Big East Network.

The were tabbed by ESPN and NCAA Productions to call the NCAA Tournament and were at the mic for the Georgetown-Princeton game in 1989 which almost became the first upset of a 1 seed by a 16 seed. And for those of you who weren’t alive in 1989, yes, ESPN aired the NCAA Tournament and its wall-to-wall coverage of the 1st Round and Sweet 16 were the model for how CBS and Turner air the tournament today:

Mike would eventually call NCAA Tournament games for CBS in the early 1990’s before going to the Celtics full-time.

NBC was the network that was associated with the NCAA Tournament in the 1970’s and was the entity responsible for moving the Championship Game into Monday night starting in 1973.

Before he had a renaissance on the NCAA Tournament in 2011, Marv Albert called it on NBC. He called college basketball during the regular season for the NBC/TVS consortium in the late 1970’s into the early 1980’s which aired conference games of local interest to various regions.

In the Northeast, Marv Albert and Bucky Waters would call ECAC games (look this up, this is before the Big East) and they were teamed for the NCAA Tournament by NBC for regional games including the 1981 game between Arkansas and Louisville that ended on a miracle halfcourt shot by U.S. Reed. Note the cameo by Bryant Gumbel in the NBC studio:

CBS shocked the sports media world by wrestling the NCAA Tournament rights away from NBC in 1981 and its association has remained to the present day. CBS’s first “A” team was Gary Bender and Billy Packer. Bender was John Madden’s first on-air NFL partner and also called the NBA Finals before moving to college basketball in time for the 1981-82 season. Packer, who had been with NBC, moved over to CBS where he would stay until 2008. No man would be the “A” analyst for an event for so long. We’ll get more into Packer later, but this is his first time on this list.

Bender and Packer would be teamed for the first three years of CBS’s coverage and they had some memorable games including the North Carolina-Georgetown championship in 1982 and the very famous North Carolina State-Houston game in 1983. Bender had a tendency to be over dramatic at times, but when his voice rose, you knew it was a big moment and you had to pay attention.

Brando and Gminski have been a longstanding team having worked on ACC games for Fox Sports Net and now ACC Network/Raycom. CBS brought them over to the NCAA Tournament in 2003 and they were teamed together until Brando left in 2013.

They work well off together and still do well when they’re teamed up on ACC Network games.

Verne and Len were teamed on both college basketball and the NBA for CBS in the early 1990’s. They forged a very good team for a couple of seasons and were at the mic for the Duke-Kentucky East Regional Final at the old Spectrum in Philadelphia. You could hear the chemistry between the two as Uncle Verne and Len worked very well together.

Kevin Harlan and Dan Bonner haven’t been on the NCAA Tournament forever, it only seems that way. They were partners on the tournament for CBS starting in 2004, then in 2011 when Turner joined CBS, Reggie Miller was assigned to their team. Then in 2012, Harlan and Miller were teamed with Len Elmore through 2014. Bonner returned to Harlan and Miller last year.

Kevin is well known from his work on both CBS and TNT. Bonner has been a longstanding analyst on ACC Network games for Raycom and joins CBS for the postseason. You may not be aware that Bonner has been on the NCAA Tournament dating back to 1995 and he’s worked with Gus Johnson as well.

One of Kevin and Dan’s most famous games was the Northern Iowa-Kansas game in 2010 when Ali Farokhmanesh’s three point dagger buried the Jayhawks. Bonner’s famous “YOU CAN’T BE SERIOUS WITH THAT SHOT!” still lives in UNI lore.

There was also the Florida Gulf Coast upset over Georgetown as called by Kevin/Miller/Elmore in 2013:

There are times when it sounds like Miller is along for the ride while Bonner and Elmore do more of the X’s and O’s, but he does lend some excitement when there’s a big play.

Gus Johnson is a big part of the NCAA Tournament and it’s too bad he’s still not calling the games, but we always have the memories. Had Gus remained with CBS, his teams might have been higher on the list.

It really hasn’t mattered who Gus’ partner was, it just seemed he was always calling an exciting game. With Dan Bonner, Gus had Gonzaga-Florida and the famous “the slipper still fits” call:

And Gus and Len had the UCLA-Gonzaga game in 2006 where the Bruins had an epic comeback from 17 points down. Gus with the “Heart! Break! City!” line is classic. Adam Morrison is still crying about this game to this day.

And here’s Gus and Len calling the double overtime Xavier and Kansas State classic in the Sweet Sixteen in 2010:

Ian joined CBS in 1998 and his association with the Tournament began with Jim Spanarkel and went through 2014. They were solid in as they worked the first weekend throughout. The pair was split up last year when Eagle was teamed with Doug Gottlieb and Sparnarkel went to Verne Lundquist. This year, Eagle will work with Chris Webber and Len Elmore while Verne and Spanarkel will be back together again.

Ian and Jim had great chemistry and worked well off each other having also worked on Nets broadcasts too.

In 2005, Ian and Jim had an overtime thriller with West Virginia and Wake Forest:

Here’s one of their games from YES where Ian calls Jim “a wanker,” as they call a Nets game in London.