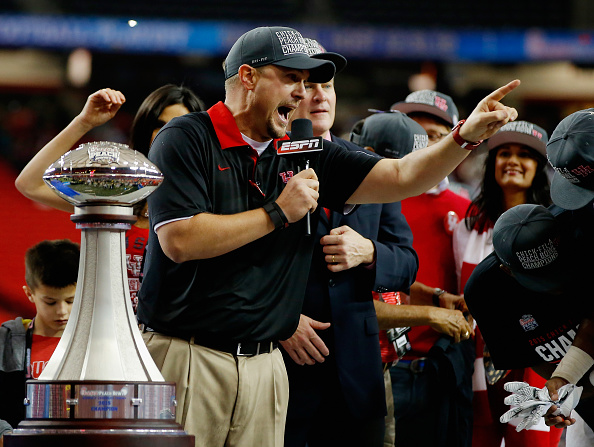 Houston Cougars head football coach Tom Herman has taken exception to media reports before, and now he’s upset about one form of media and nostalgic for another one. Pete Mundo of Heartland College Sports wrote last week that Herman had discussed taking the Baylor job and that his agent had been in Waco for a face-to-face meeting about it, and Colt Barber of 247 Sports’ Baylor site tweeted confirmation later:

Herman has denied this, and went on a rant about it to reporters at the Texas High School Coaches Convention in San Antonio Monday:

Here are the highlights of Herman’s complaints, transcribed by Adam Coleman of The Houston Chronicle:

“It’s a shame because it affects my family life, too,” Herman said. “When I do my job poorly or when I make a mistake in my job, there are tangible repercussions of that. It feels like now that our media – if that’s what you want to call some of these guys with a smartphone in their hand and sources – there are no repercussions. There’s no restitution for me.”

…”I had to spend a day of vacation – I was at Schlitterbahn on Wednesday with my kids and my phone’s blowing up and I have to spend time on vacation away from my family to then draft some statement and squash some rumors,” he said.

“Did that guy have to do that, that was wrong? Did he have to come out and make a statement that he was wrong? No.”

…”It’s just a shame that that’s the way that media is today. I just wish there were more repercussions and punishment for those when you get it wrong. Just like my kids, you screw up, you screw up. Say it. ‘I screwed up. I apologize. I screwed up.'”

He then went in a “things were better back in the day” direction:

“Remember back in the day when we used to have newspapers?” Herman said. “We used to have real reporters. They used to care about their relationships with people. I remember there was a section in the newspaper every day, retractions and omissions, right? Where is that button on Twitter?

“I have so much more respect for someone when they say ‘I was wrong, I admit I was wrong. I apologize for being wrong. I’ll do a better job next time so I get it right.’ Great. Shake hands and let’s move on.

“But when guys are wrong and egregiously wrong and still defend their wrongness, that’s when I have a problem.”

…”Some of these guys, who do they work for?” Herman said. “They don’t work for anybody, right? They don’t have bosses. They don’t have subscribers. They just are who they are and then these things grow legs.

“If there was some way to punish the offenders and at least have some restitution for me and my family, I’d feel a lot better. Don’t think that’s coming anytime soon.”

Herman may be right about this report being wrong, but it may also depend on the details and the interpretation of them, as his January dispute with Houston radio hosts John Lopez and Nick Wright (who now works for Fox Sports) did. He’s also wrong in his insistence that “we used to have real reporters”; there are plenty of “real reporters” out there, both inside and outside of newspapers, and there are plenty of online writers and outlets who do offer updates, corrections and retractions when they’re proven wrong. There were plenty of erroneous reports in the newspaper-focused era, too. Moreover, while Heartland College Sports is Mundo’s site, Barber definitely has both bosses and subscribers he’s accountable to, and if Mundo is proven wrong on something like this, that has consequences for him with readers and advertisers. Herman may be annoyed about this report, and if it in fact was incorrect, he isn’t wrong to be upset about it. He is wrong to tar a whole medium by one erroneous report, though, and to say that everything was so much better back in the day.

Update: Mundo has responded to Herman’s comments here, and stands by his story.