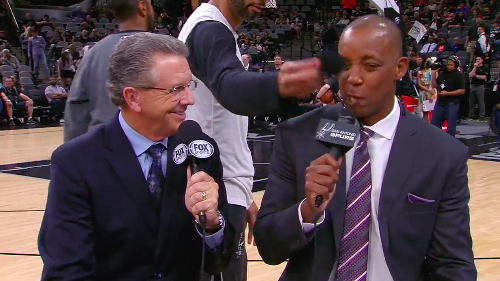 There’s this misconception out there that Tim Duncan is some kind of robot that doesn’t have a sense of humor and lacks any understanding of the human concept of emotion.  Well, that’s just a nasty stereotype that’s out there about The Big Fundamental.

Over the weekend, Duncan showed his playful… and destructive side, when he messed with former teammate and current Spurs analyst Sean Elliott.

I’m glad Duncan went for something new and blew past the photobomb, which is becoming a bit old and tiresome these days.  At least he went to the next level and took off Elliott’s glasses and played with his microphone.  And of course he did it all with expert technique.  Study this film, future NBA pranksters.