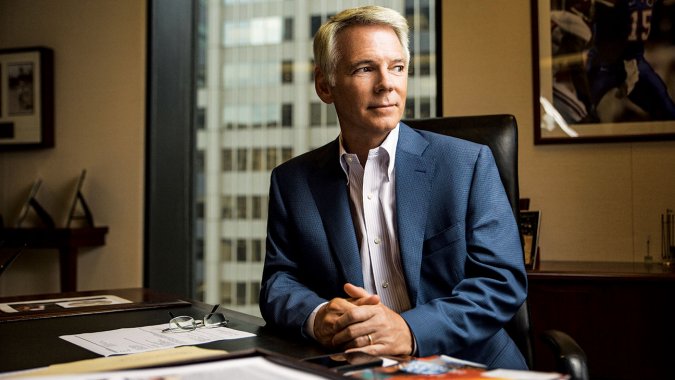 The NFL just keeps finding new ways to make money. Last month, it came out that the league was considering splitting Thursday night games between CBS and NBC, and that came true Monday with Sports Business Journal‘s John Ourand and The Wall Street Journal‘s Joe Flint both breaking the news that the league has struck a deal with those two networks. The official NFL announcement followed soon afterwards, and includes the details that both networks will broadcast five Thursday games (each simulcast on NFL Network as well), while NFL Network will still have eight games to itself (a mix of Thursday, Saturday, and additional “to be determined” late-season games). CBS will have five games early in the season, with NBC having the next five.

The most remarkable thing here may be the money. According to both Ourand and Variety’s Brian Steinberg, this clocks in at $225 million per network per year, so $450 million overall to the NFL per year for 10 games (five per network). So, while each network is paying less than the $300 million CBS reportedly paid for eight games last year, that’s a 50 per cent jump in revenue for the league, with just a 25 per cent increase in the number of games sold. Each game here is now worth $45 million on average, a boost from the $37.5 million it was worth last year. And the NFL can still get more from the streaming rights to these games (which are being sold separately). The league’s statement said “The NFL is in active discussions with prospective digital partners for OTT streaming rights to Thursday Night Football. A deal announcement is expected in the near future.”

“We had a number of goals going into the negotiation,” McManus said. “We wanted to retain the rights to Thursday Night Football in a meaningful way, and I think five games is certainly meaningful. For us, it was more attractive to have the early part of the season to have the opportunity to promote our number-one lineup. Third, we wanted to come to an agreement with the NFL in a financially-responsible way for CBS, and we did that also.”

While CBS won’t be the only non-NFL Network destination for Thursday night any more, McManus said he’s quite pleased with the outcome.

“It became relatively apparent early on in the process that they were going to have two partners, and the fact that NBC is promoting the games also I think is good for the NFL,” he said. “We’re very happy. I’m very happy with how the whole process ended. We really accomplished our goals, so it’s a good day for us.”

The Thursday night games on CBS/NFLN drew a massive 10.9 rating with a 19 share last season, and was a key factor in CBS’ overall ratings. McManus said having that package over the last two years has been important for the network as a whole, both for the numbers it’s drawn and for the ability it’s given them to promote their other programming during football broadcasts.

He expects that trend to continue under the new deal.

“I think the next two years are going to be unqualified successes also. I think the momentum that we’ve achieved by making Thursday night a real viewing destination for NFL fans is just going to continue for at least the next two years. I feel good about the job we’ve done, and I think we’ve laid a really good foundation for the future.”

Many have wondered how much NFL content people want to see and how many Thursday games they’ll embrace, but McManus said the story so far suggests there’s plenty of demand out there.

“Whenever the NFL adds programming, the appetite seems to be there from fans, and the ratings keep getting better,” he said. “We had our highest-rated AFC championship game in 29 years. So there doesn’t seem to be a lessening of interest on the part of fans and viewers. I think Thursday night is going to continue, we’re going to continue to improve the ratings, and it’s going to continue to be a really valuable franchise and a real viewing destination for viewers, for fans.”

He said this deal will be a key piece of CBS’ overall approach going forward.

“I think it’s going to ensure that the momentum we have in primetime will continue,” McManus said. “It’s going to mean that we are a very important part of Thursday Night Football, which from a corporate standpoint was very important to us. We like being associated with the best programming on television, and NFL football in many ways is the best programming on television. To be part of it and have both a Sunday afternoon package and a Thursday night package is really beneficial for our company.”