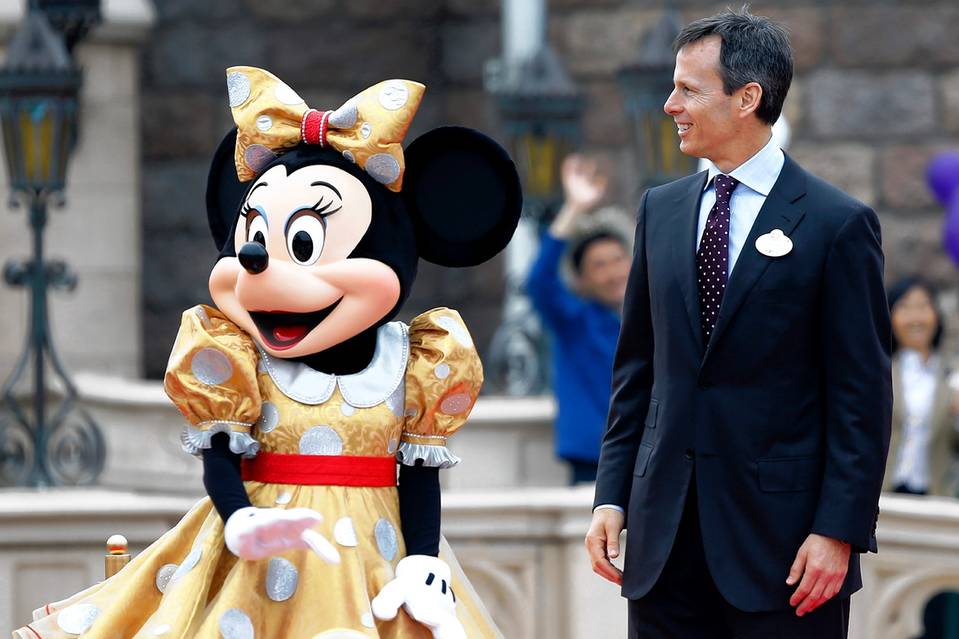 The surprise departure this week of Disney COO Thomas Staggs may have significant implications for ESPN. For one thing, it creates substantial uncertainty about Disney’s succession plan: Staggs was seen as the favorite to succeed current Disney CEO Bob Iger when Iger’s contract expires in 2018, but his exit “sends Disney’s CEO succession plan back to square one,” and whoever eventually replaces him as Disney’s planned next CEO will have a lot of control over ESPN’s direction and future. For another thing, it means ESPN president John Skipper (along with other division heads) is now reporting directly to Iger rather than in a dual report to Iger and Staggs. Perhaps most importantly in the immediate future, though, it takes away a key Disney figure who wasn’t at all keen on the idea of selling ESPN on a standalone over-the-top basis, and that might help push ESPN from talk to action there. Here’s what Staggs said about over-the-top ESPN at the Bank of America/Merrill Lynch Media, Communications & Entertainment Conference in September:

Answering a question at the conference, Staggs said he thought that sharp downturn in Disney stock, which dropped from more than $121 a share to $108 on the news, was overblown. “I think, yes, the market overreacted,” Staggs said. “We feel good about where we sit. ESPN continues to be one of the most important and valuable brands in programming.”

Disney’s No. 2 executive, who rose to that position seven months ago behind CEO Robert Iger, said he thought that ESPN’s trove of sports rights deals had been underestimated. Some of the arrangements stretch all the way to 2030. He cited tennis’s ongoing U.S. Open and the recent resumption of college football as two strong franchises for ESPN, on both old and new platforms. The audience for college football digitally, via Watch ESPN, was up 60% on opening weekend, he said by way of example.

Staggs said that the advance of viewing online led some analysts to believe that television’s decline was more rapid than it is. Ratings showed that most digital users continue to consume most of their sports content via traditional linear television. “People sometimes think of this as a zero-sum game, more than is appropriate,” Staggs said, adding later: “We continue to believe in the value and appeal of the multi-channel bundle and that value and that appeal is going to continue for some time.”

In February, Staggs told Ben Fritz of The Wall Street Journal that he had “spent a great deal of time on media networks recently, focusing on the future of television.” His comments there seemed to show a little softening on the direct-to-consumer approach, but also indicated it still wasn’t the main TV focus for him:

It’s not so much a change of thinking. For the past few years, our business has been leaning toward the brands and products consumers seek a relationship with. There is an increasing opportunity to take advantage of the strength of those brands and to reach consumers more directly.

We just mentioned on our last earnings call, however, that we think for the foreseeable future the bundle of programming is going to be the predominant way people get their television. Some people might view that as a contradiction. It’s not. That bundle can be strong even as we’re taking advantage of opportunities to have direct relationships with consumers.

Staggs’ exit doesn’t necessarily mean ESPN will be going over-the-top any time soon. There’s substantial debate still about how effective and cost-efficient that approach is, with some analysts saying it won’t work for ESPN at all, and you can bet they’ll be keeping a close on how Rogers Sportsnet’s new OTT service in Canada performs. Whoever replaces Staggs may share his views or be even more inclined towards emphasizing traditional bundles (or skinny bundles, where ESPN has recently increased their presence), so this may not lead to OTT ESPN.

However, Iger himself has seemed more optimistic about the idea of direct-to-consumer sales. Thus, Staggs’ exit may trigger further movement in that direction. That could be the biggest short-term implication for ESPN. The biggest long-term one is who will take Staggs’ role, and what they’ll want to do with Disney’s sports side. At the moment, about all we know there is that there are likely to be big changes coming.