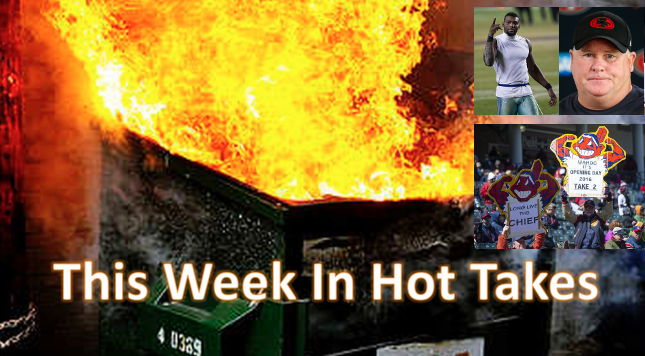 In a world that has embraced debate, there are many hot sports takes out there in any given week, and they’ve been termed “one of America’s greatest exports.” But which takes can stand out in that crowded environment? And which personalities consistently bring the most heat? That’s what we’re tracking in This Week In Hot Takes, counting down from the fifth-hottest to the hottest. We’ll be keeping an ongoing leaderboard where we’ll eventually crown a king or queen of Hot Takes. Here’s the latest edition covering Oct. 21 to 28, from your friendly neighborhood keyboard bully…

5. Jason Whitlock criticized Tony Romo’s party for teammates: Jimmy Traina’s AA diary of a day of embracing debate pointed out how obsessed all of these shows are with the Dallas Cowboys, and boy, was that ever on display this week. The level of discussion of the current Cowboys’ soap opera was reminiscent of that around the famous cliffhanger on Dallas. Three of our five hot takes here are about this team, and interestingly enough, they’re all about different players. Let’s start with Jason Whitlock ranting about Tony Romo throwing a party for his teammates:

“Given what’s going on with the team, this is inappropriate. …Tony isn’t the starter at the moment. Maybe over the long term, maybe he will be back as the starter. This is something the starting quarterback should do. Not the guy who’s sidelined with injuries, not the guy who ain’t getting off the bench until things go sideways, cause he’s not.”

If you’re any other athlete and you host your teammates for a party, you’re praised for your contributions to team bonding and chemistry. If you’re Tony Romo, you’re being “inappropriate” and engaging in a Machiavellian plot to get your starting job back. This is as logical as Skip Bayless’ take last week that Romo “rejuvenated” his career by breaking up with Jessica Simpson.

4. Lowell Cohn on Chip Kelly’s “rinky-dink playbook”: Santa Rosa Press-Democrat columnist Lowell Cohn is becoming a regular feature around these parts for his war with San Francisco 49ers coach Chip Kelly, general manager Trent Baalke, and owner Jed York, which has included press conference interruptions and incessant usage of “son.” Cohn continued that this week with another column, which managed to simultaneously continue his ignorance of common football terminology (last week Cohn was confused by an “inside twist”, this week, he’s complaining about “peeling the double team”) and criticize Kelly’s playbook. Here are the highlights:

His answer to his linemen getting mauled — the mauling was why the Niners lost, not because Colin Kaepernick was no good — well, his answer was something about peeling the double team off his two inadequate linemen, although sometimes one offensive lineman controlled Buckner or Armstead. But back to peeling the double-team. We ask: What prevented Chip from peeling during the game? In Brooklyn in 1959, we would have told him, “Yeah, Chip, you’re a peeler.”

And we say this. Chip, you are a born college coach. You are rational and controlled. You like to teach. You can motivate teenagers and young men. Student athletes look up to you.

Your speed-up offense is useless in the NFL, but it once worked in college and probably could work again. Same goes for your gimmicky read-option or zone-read or whatever you call it. Your rinky-dink playbook, more like a brochure, might work in the Pac-12, although the conference has evolved since you left. And that awful defense of yours, oh my God, wouldn’t get humiliated in college. Probably not.

So, Chip, if Phil Knight makes you a good offer, thank the Yorks for all the good times and the wonderful memories, and flee to Eugene.

Uninformed takes on zone-read and read-option offenses are a dime a dozen, but Cohn’s take stands out for how he’s able to criticize Kelly’s playbook while also admitting he doesn’t understand it. Fact: this column also gains bonus points for starting its first first six paragraphs (all one or two sentences) with “Fact.”

3. Skip Bayless would vote Dak Prescott for NFL MVP: The long-running saga of Bayless’ obsession with the Cowboys got another chapter this week when Bayless said he thinks Prescott is the NFL’s most valuable player so far:

RT if you agree with Skip pic.twitter.com/DWTm1ylx6T

Prescott is currently 23rd in passing yards (1,486), 21st in passing yards per game (247.7), and tied for 22nd in passing touchdowns (seven). He also has 20 rushing attempts for 67 yards and three touchdowns, plus four fumbles and an interception. He is not winning any MVP awards outside of Bayless’ mind.

2. Shannon Sharpe thinks the Cowboys should get rid of Dez Bryant:

"I want to get rid of @DezBryant for one reason: I want to get his negative influence out of the locker room." — @ShannonSharpe pic.twitter.com/mk84LsaI8q

“The two stars on offense do not need to have THAT GUY in their presence. I’m trying to remove him at all costs! It’s going to be very, very hard because he’s making, his cap number next year is $17 million, and that’s a lot of money. I don’t know many teams that are going to take that contract on, and the Cowboys are going to probably want a high draft pick. Now, you lower the draft pick, you might be able to move him.”

The Undisputed obsession with Dez Bryant continues (hopefully Bryant won’t keep tweeting back at them), and it’s Sharpe dropping the hot takes on him this time (welcome to this column, Shannon!). By all means, get rid of a 27-year-old 6’2” receiver who runs a 4.5 40, has three 1,000-yard receiving seasons under his belt in the NFL, and has made some of the most spectacular catches in this league. Get rid of him “at all costs” for poor meeting attendance and chemistry concerns, and take a low draft pick for him. That’s a guaranteed blueprint for success.

1. Rosie DiManno: “Indian is not pejorative”: Toronto Star public editor Kathy English wrote a piece this week examining why the paper’s sports department still references the Cleveland Indians by name despite the editorial page opting out, and it included thoughtful discussion of the differences between papers’ news and editorial sides, insightful takes from different writers and columnists on how they try to avoid or minimize use of the controversial name, and then this piece of fire from noted hot take artist Rosie DiManno:

For her part, columnist Rosie DiManno believes that “Indian is not pejorative.” She pointed me to her Sept. 12 column in which she cited a Washington Post poll indicating that a majority of Native Americans say they are not offended by the Washington “Redskins” name.

There are a lot of problems with that poll, but the bigger problem is assuming that because a majority doesn’t claim to be offended by something, that makes it okay to use it and bother the people who are offended by it. Also, who gave DiManno the authority to determine what is and is not pejorative to a group she isn’t part of? Her assertion that “Indian” is fine also flies in the face of previous Star statements; as English examined in 2009, the term is seen as highly problematic and derogatory by many Canadians in particular (and many Americans as well), and English argued then it “should be carefully considered and used only when applicable in a legal context.” Whether or not the paper should use “Cleveland Indians” (and if so, how frequently) is a valid and complex debate (for all the problems with the term, it is the team’s official name), but DiManno’s flat-out assertion that it’s “not pejorative” is a hot take. She’s been trying to defend “Redskins” and “Indians” a lot lately without much success, and this is just the latest example of that.

Notable absences this week: Stephen A. Smith, Colin Cowherd, Clay Travis, The New York Post. This is the most lukewarm we’ve seen Whitlock in a while, but he still managed to get in at #5, and he’s still running away with this. Cohn has now joined the ranks of those with multiple appearances, and Sharpe and DiManno are on the board. It may not be the last appearance for either.