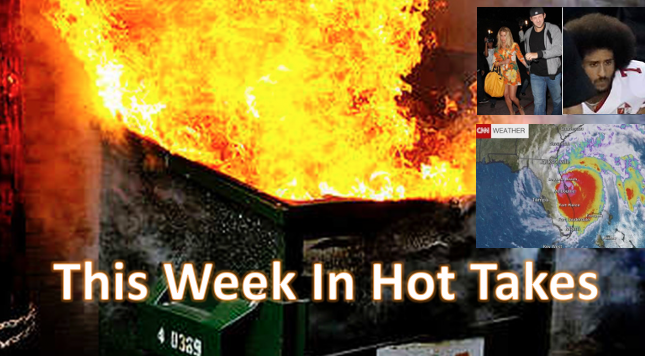 In a world that has embraced debate, there are many hot sports takes out there in any given week, and they’ve been termed “one of America’s greatest exports.” But which takes can stand out in that crowded environment? And which personalities consistently bring the most heat? That’s what we’re tracking in This Week In Hot Takes, counting down from the fifth-hottest to the hottest. We’ll be keeping an ongoing leaderboard where we’ll eventually crown a king or queen of Hot Takes. Here’s the latest edition covering Oct 7. to 13, from your friendly neighborhood keyboard bully…

5. Skip Bayless says Tony Romo rejuvenated his career by breaking up with Jessica Simpson: Bayless has long been known for his hot takes on the Dallas Cowboys, which go back even beyond his feud with now-colleague Troy Aikman (which is more complicated than you might think), and he’s certainly keeping that up on Undisputed. He’s been publicly feuding with Dez Bryant for weeks, and that’s still going on (there’s somehow 18 minutes of that from Thursday’s show, and Bayless debate partner Shannon Sharpe even suggested that Bryant was “petty” and “thin-skinned” for responding to Bayless’ criticisms), but the real hot take Bayless dropped this week is that Jessica Simpson was holding Tony Romo back:

This comes right after Bayless blasts “team-obliterator Terrell Owens,” which leads into his discussion of Romo. “I was also very down in that period on Tony Romo because of his tumultuous relationship with Jessica Simpson, which I thought was affecting his ability to focus and dedicate himself to playing quarterback. Soon after, just before actually that tweet in ’09, Tony had broken up with Jessica, and he started to play better and I started to drive the bandwagon down the stretch, and would you actually believe they won a playoff game that year?”

Sharpe chimes in with a “Skip, that’s unfair you put that on Jessica Simpson,” and Bayless responds “I did, and he did too, and he talked about it later and it was just tumultuous, it was always one thing after another off the field, I talked about it on-air constantly, and I can back it up, and I think he knew that it was wrong and he had to pay too much attention off the field and he was not dedicating himself to the process of playing NFL quarterback.”

As Stephen Douglas noted at The Big Lead, there’s little support for this idea in Romo’s numbers; he played well in 2009 and made the Pro Bowl, but also made the Pro Bowl in 2006 and 2007 (while dating Simpson during the latter year). But sure, Skip, go ahead and blame Jessica Simpson, and argue that no quarterback should have to “pay too much attention off the field.”

4. Mike Harrington is sick of his hot takes being called hot takes: Harrington, who works for The Buffalo News, has fired off some remarkable hot takes over the years, including this 2014 shot at Dan Le Batard (but hey, the BBWAA apparently has more issues with transferring ballots than with lobbing incredibly inappropriate insults at fellow members) and these 2016 takes on how “your opinion is worthless” if you don’t cover a team on a day-to-day basis (which came from him defending the Buffalo chapter of the Pro Hockey Writers Association picking Ryan O’Reilly, facing DUI charges, as the nominee for the character-focused Masterton Award, and then trying to kick Greg Wyshynski out of the PHWA for questioning him). Now, he’s apparently tired of having his hot takes accurately labeled:

Really sick of people calling every columnist's opinion a "hot take". Stupid term of the social media era. Columns have been columns forever

Yes, Mike, columns have been columns forever, but many columns have always been full of thoughtful, nuanced opinions and analysis rather than attention-seeking over-the-top hot takes. Many still are, too; while some of the material for this feature comes from columns, the majority of it’s from radio, TV or Twitter, mediums even more suited to dropping the hottest takes possible. If you can’t tell the difference between a column and a hot take, and if you think it’s every columnist’s opinion that’s getting painted as a hot take, that says more about you than it does about “the social media era.”

3. WAR! What is it good for? According to Bob Ryan of The Boston Globe, the answer is indeed “absolutely nothing.”

And anyone citing the totally bogus nonsense known as WAR is eliminated from any serious baseball discussion.

There have been plenty of anti-stats rants over the years, but seeing someone so committed to bashing WAR (Wins Above Replacement, one of the most commonly-cited and most valuable stats out there) in 2016 is remarkable, especially with the “totally bogus.” Has Ryan been watching a lot of Bill and Ted?

Don’t even try to wrap your head around that convoluted logic.

1. Clay Travis: “Gators are using hurricane as excuse to duck LSU”: There have been a whole lot of stupid things written and said about the cancellation and eventual rescheduling of the LSU – Florida game, but this one, from Travis’ Fox Sports Radio show last Friday, takes the cake:

That take, which got Travis repeatedly called out by Florida QB Luke Del Rio, looks particularly silly in retrospect given that the SEC’s now said both teams would have been ineligible for the conference championship if they hadn’t made up the game. Also, it’s notable that this Thursday saw Travis write a nuanced, smart, reported analysis of the various factors in play in that cancellation, rescheduling and controversy. Where was that when he was accusing Florida of ducking LSU?

Notable absences this week: Stephen A. Smith, Colin Cowherd, the New York Post. Curt Schilling’s comments on children were certainly a hot take, but he’s not in sports media any more, so he’s ineligible. Jason Whitlock is continuing to run away with the overall title, but at least Clay Travis made up a little ground on him this week. And Skip Bayless has now caught up to his former First Take partner!