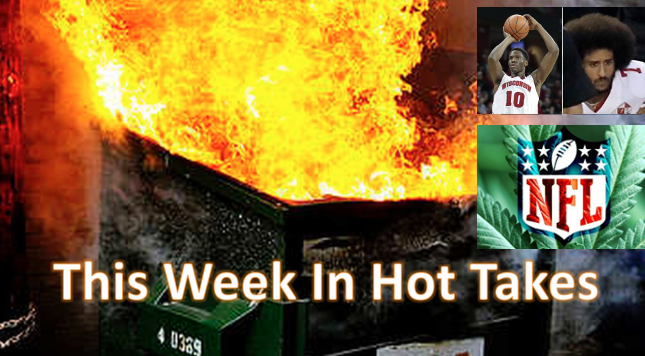 In a world that has embraced debate, there are many hot sports takes out there in any given week, and they’ve been termed “one of America’s greatest exports.” But which takes can stand out in that crowded environment? And which personalities consistently bring the most heat? That’s what we’re tracking in This Week In Hot Takes, counting down from the fifth-hottest to the hottest. We’ll be keeping an ongoing leaderboard where we’ll eventually crown a king or queen of Hot Takes. Here’s the latest edition covering Nov. 4 to Nov. 10, from your friendly neighborhood keyboard bully…

5. Greg Bedard: “A divided nation needs the NFL now more than ever”. Well, that’s actually what Sports Illustrated tweeted out about this piece, and Bedard (making his second-straight appearance in this column!) first seemed to be trying to walk that back a little (“More accurate: Slumping league in position to benefit as divided nation moves past the election. Will NFL rise to the occasion?”), but then he tweeted it again and pinned it as “A divided nation looks to a limping NFL for distraction after the election. Don’t screw this up.” The column itself is exactly as bad as you’d expect:

In the wake of the Presidential election, these are uncertain times for much of the Republic.

Regardless of how you voted, there is great angst among many Americans. Co-workers and neighbors are looking at each other differently, wondering who voted for whom and what, if anything, that says about them. Many parents are having difficult conversations with their children. People of different races, religions, sexual orientation and ethnicities are unsure of what is to come, and whether they will have a place in this country. There is uncertainty about the economy, health care, climate and a whole host of other issues.

Basically, people have a lot of serious questions and issues on their minds. And that’s on top of the normal stresses that come from everyday life as a student, employee, manager or parent. Much of the nation is on edge.

Which leads to another truth: people will want to escape from all of that, even if just for a few hours each week. They’ll want to step away from the rancor on Twitter and Facebook, they’ll be turning off the contentious cable news in droves for the first time since the election cycle began, and they’ll just want to sit and enjoy something for a few hours with good company, without having to revisit the election or the big questions that come with it.

The league is still doing well, but limping a little bit. For various reasons (and we all have our beliefs, be it the election, saturation, level of play, poor officiating, political protests or whatever) its ratings have been down this year. And wouldn’t you know it, while the nation is licking its wounds and looking for distractions, the NFL just happens to be entering the second half of its season and teams are making their postseason push.

Now that’s a #pleaselikemysport. Of course, it is possible that NFL ratings will rise in the weeks ahead, and that may partly be thanks to no competing election coverage, but it’s likely that may have more to do with the playoff races tightening and no competition from the baseball postseason. Selling the NFL as feel-good mindless entertainment is also interesting given what we know about concussions and post-career life for many players, and what we know about the league’s treatment of serious issues like domestic violence.

Bedard isn’t all positive about the NFL here, going on to point out how it needs to improve the quality of play and the quality of officiating, but his basic take that “a divided nation will come together around the NFL” is quite fiery.

4. Clay Travis: “If you’re looking for racism in the 2016 presidential campaign, it’s easy to find, but it’s on the democratic side, not the republican side.” Some of the points Travis makes in this column about Tuesday’s U.S. presidential election are valid, such as Donald Trump drawing less votes than Mitt Romney in 2012 and the election turning on the millions who voted for Barack Obama in 2008 and/or 2012 but didn’t vote for Hillary Clinton. However, there are plenty who would take exception with his views on racism here, especially with how they apply to black voters who didn’t vote for Clinton:

In fact, if you want to interject race into the equation, the only way I can see that it really applied in this election more than any other recent elections was in this way — millions of black people who voted for Barack Obama in 2008 and 2012 didn’t show up to vote for Hillary Clinton in 2016. (Obama won black voters 93% to 7% in 2012 while Hillary won black voters just 88% to 8% against Trump.)

Given that Hillary espouses pretty similar positions to Obama and that Michelle and Barack campaigned widely for her in an effort to drive black voters to the polls, it certainly seems like many black voters chose to stay at home rather than support Hillary.

Man, if only there was a word for when someone prefers someone of their own color over someone of a different color.

So if you’re looking for racism in the 2016 presidential campaign, it’s easy to find, but it’s on the democratic side, not the republican side.

There are plenty of reasons for voting or not voting for a particular candidate, many of which don’t have anything to do with the color of their skin. Travis doesn’t present much evidence that these voters didn’t vote for Clinton because she was white, and his declaration that there was no racism on the Republican side is also a pretty hot, and disputable, take.

3. JT The Brick thinks the NFL permitting marijuana would lead to players getting high during games.

Speaking of elections, California, Maine, Nevada and Massachusetts legalized recreational marijuana through ballot initiatives, while North Dakota, Montana, Arkansas and Florida approved medical marijuana. Despite having teams in states where recreational marijuana was already legal (to say nothing of medical), the NFL has continued to test for pot and ban those who violate that policy, but that may be starting to change.

Current and former players have been lobbying the league to research cannabis pain management (whether through marijuana itself or non-psychoactive related cannabis derivatives like cannabidiol) as an alternative to the painkillers the NFL’s currently being sued over, the league has expressed some interest, and the players’ association is now “actively looking at” the idea. There’s plenty of room for smart discussion of the pros and cons and the challenges (including how a national league would approach something which has its legal status varying dramatically from state to state). And then there’s this moronic “Haha, this means players will be high on the sidelines!” take from Fox Sports Radio host J.T. The Brick (John Tournour):

No, the idea of a league using marijuana for pain management doesn’t suddenly turn the world into How High.

"We're crippling black kids with over sensitivity rather than preparing them for the real world." —@WhitlockJason on Nigel Hayes & Wisconsin pic.twitter.com/yT3n1RubZK

A black player objecting to a fan at his school showing up to a game with an Obama mask and a noose, sharing his own experiences, and thoughtfully asking for change is now “crippled with oversensitivity”? Okay, Jason. Fortunately, the Wisconsin administration seems to be taking this a bit more seriously, changing their policies not just to ban nooses but to say that any fan who engages in violent, threatening or abusive conduct will be ejected. That’s a better approach than Whitlock just saying Hayes is oversensitive.

"For him not to vote…as far as I'm concerned, everything he said meant absolutely nothing!"

If you can’t bear to watch angry Muppet Stephen A., here’s a transcription of this rant, from Charles Curtis at For The Win:

“After all this noise that you made, even though you didn’t intended to do so, by offending our military service men and women, and pointing out about how you wanted to bring attention to racial injustices and beyond in this country, to turn around and not even take your behind to the polls to vote for a particular candidate, it is shameful! Absolutely shameful!”

…For him not to vote, as far as I’m concerned, everything he said meant absolutely nothing.”

This is ridiculous. Yes, voting is important, and yes, it would have been better if Kaepernick had voted. Even if he had declined to vote on the presidential race, he could have voted for House, Senate and state legislature races and ballot initiatives. That’s a way to express the concerns he’s raised about racism in America through the democratic mechanism he’s given, and while his one vote wouldn’t have altered any particular race, his decision to vote could inspire supporters to do the same and to work to achieve actual change.

However, not voting doesn’t invalidate anything Kaepernick has said or done. In fact, his protests and his commentary on racism and policing has likely made much more of a nationwide difference in bringing those issues to light and causing some reform (such as the Denver moves that led Broncos’ linebacker Brandon Marshall to say he’s ending his protest) than any vote he cast could have. Of course, Kaepernick could have voted as well as protested, and that would have been better, but the two are largely separate issues, and declining to vote doesn’t make his protests meaningless. He used a far bigger platform than the one he was given at the ballot box. Meanwhile, Stephen A. has arguably a bigger platform still, especially now that First Take will be moving to ESPN from ESPN2 in January, but he chooses to use it to yell and scream at athletes. Now that’s productive.

Notable absences: Skip Bayless (almost made it for continuing his feud with Dez Bryant), Shannon Sharpe, Don Cherry (almost made it for this), The New York Post. Welcome back, overall leader Jason Whitlock and runner-up Clay Travis. Welcome to third place, Stephen A., and welcome to sixth, Greg A.!