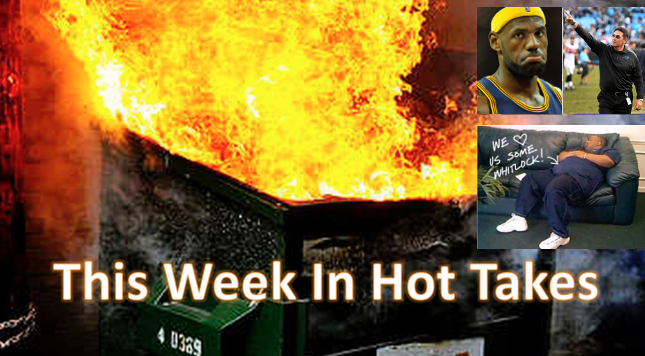 Welcome once again to This Week In Hot Takes, a collection of all the hottest sports media takes. Make sure not to burn yourself on these ones, carefully selected from the week of December 2-8.

5. Phil Mushnick’s whining about late games: New York Post columnist Phil Mushnick is known for his rather cranky take on most things in the sports and sports media world, and this time around, he actually admitted it, beginning Monday’s column with “Believe me; I don’t wake up cranky, and I don’t sit down to watch sports cranky.” However, Mushnick then went right on to be incredibly cranky:

Friday, second half of the Colorado-Washington Pac-12 championship kicked off at 11:13 p.m., ET, on FOX. Forget it. Say good night, Gracie.

Sure, it was played on the West Coast, but the majority of the population lives east of the Mississippi. However, had this game been played at a logical time, say, late Saturday afternoon, FOX would have had to preempt “TMZ” and “Inside Edition.”

What Mushnick doesn’t realize is that the world doesn’t revolve around his viewing habits. That game started at 6 p.m. local time, which is astoundingly early for a game on a workday, and that was done to try to accommodate TV as much as possible. In fact, there’s an argument that the game was played too early; the attendance was announced as 47,118, less than many would have hoped for, and part of that’s the timing. (Other factors include the location in Santa Clara, the distance from the participating schools and more, but the timing certainly didn’t help.) Yes, the game could theoretically be played on Saturday, but it would lose some attention to the Big Ten, ACC and SEC championship games. The Pac-12 championship game is far from perfect, including on the timing front, but that timing is decided by calculating a bunch of factors. The crankiness of Phil Mushnick is not one of those, nor should it be.

4. Shannon Sharpe and Chris Broussard call LeBron’s water bottle challenge “blatantly disrespectful” and “disrespectful to the utmost”: So, LeBron James and his Cavaliers’ teammates started trying to flip water bottles during a blowout win over the New York Knicks Wednesday night. Naturally, Fox’s talking heads had a field day, leading to this column’s first two-for-one inclusion (as they’re both complaining about the same thing, albeit in slightly different ways):

"[LeBron James] was openly and blatantly disrespectful." — @ShannonSharpe on Cavs bench doing the water bottle challenge against the Knicks pic.twitter.com/7IZIzcJNGy

Why is this a thing that needs talking heads on two different shows to chime in on if it’s showing enough respect to a terrible opponent or not? Yes, athletes should just sit there on the bench in stony silence until asked again to contribute their physical labors. You know what’s disrespectful? The president of a team calling an opposing athlete’s friends and associates “a posse.” Flipping water bottles while on the bench during the blowout of that president’s awful basketball team seems minor by comparison. At least Sharpe tries to bring that up a bit, but both he and Broussard are launching significant unnecessary heat at James over this.

3. Rob Parker thinks Tom Brady isn’t revered because he “got away with something”:

Surprise, surprise; the completely-unnecessary addition of Rob “Cornball Brother” Parker to Undisputed has produced hot takery. This time around, we have Parker talking about how Tom Brady deserves the widespread adulation of Derek Jeter (hate to break it to you, Rob, but there are plenty who hate “Pastadiving” Jeter as well, or at least feel he doesn’t deserve to be Jeterated), but doesn’t get it because people (possibly including Rob, from the way he presents this?) think he cheated:

.@RobParkerWXYZ: Tom Brady isn't universally celebrated, because there's a small chance that he is a cheater. pic.twitter.com/kcEZN4AUxv

This take is just generally dumb. First off, almost no athletes are universally revered. Most are liked by their team’s fans and hated by the opposition. Beyond that, Parker’s allegations here are along the lines of some of the more despicable attempts at connecting players to steroids with no evidence that we’ve seen in baseball. He’s “gotta ask the question.” Just go away, Rob.

2. Clay Travis thinks Ron Rivera should be fired for Cam Newton dress code incident: Look, Carolina Panthers’ head coach Ron Rivera’s move to (briefly) bench Cam Newton for not wearing a tie seemed pretty dumb, as did his handling of the fallout. However, Fox Sports Radio’s Clay Travis managed to one-up the dumbness by saying Rivera should be fired for this:

Yes, it’s been a disappointing season for the 4-8 Panthers. Yes, some of that is on Rivera. Yes, his dress code rules are ridiculous, and his punishment of his best player for breaking them is even worse. But this guy has proven to be a very good coach, and he got his team to a Super Bowl appearance last year. Should he be reevaluated after this year? Maybe, but a firing after one bad year would seem hasty given how close this team got to the top. But even reevaluating him on performance would make more sense than firing him based on a dress code. This happened, it was stupid, and it’s been resolved. It’s only the hot-take pundits like Travis that can’t move on.

Jason Whitlock thinks professional football’s consequences are “yachts” and “money coming out of your ass”: Overall hot take leader Whitlock can always be relied upon to say something supremely dumb, and he did so again this week, railing against those who discuss the long-term consequences a violent sport like football can produce. Here’s Whitlock’s take on that:

A warning from @WhitlockJason about the consequences of playing professional football. pic.twitter.com/TaesjxNjbz

First of all, “DirecTV commercials” are only an option for a very small subset of NFL players, and there are many more who can’t afford yachts and don’t have money running from their orifices. For every incredibly well-paid NFL player, there are plenty more on the margins, and plenty who aren’t even millionaires. The NFL’s minimum active-roster salary is $450,000 in 2016, which is nice, but not necessarily leading you to a life of extravagance. Meanwhile, practice squad players make at least $6,900 per week they’re on that squad, which is $117,300 over the course of a full season. Many aren’t on a practice roster that long, though, and while even $117,300 is a nice amount of money (and more than most make in other football leagues), it’s not yacht money.

Beyond that, though, Whitlock’s comments show a complete disregard for the many former football players who have had disastrous consequences from the sport, whether related to hip and knee replacements or long-term concussion issues. They’re particularly insensitive in the week where former NFL first-round pick Rashaan Salaam reportedly committed suicide at age 42; we don’t yet know if that was related to NFL issues, but it may have been. Yes, football can be a great sport for many, and so can playing in the NFL. But it can also have major negative consequences for many who play. Writing those consequences off is stupid, especially for someone who never played professional football and has no idea what those players go through.