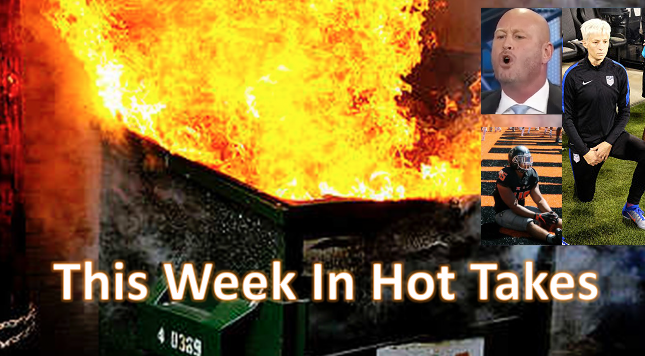 In a world that has embraced debate, there are many hot sports takes out there in any given week, and they’ve been termed “one of America’s greatest exports.” But which takes can stand out in that crowded environment? And which personalities consistently bring the most heat? That’s what we’ll track with a new Awful Announcing feature, This Week In Hot Takes, counting down from the fifth-hottest to the hottest. We’ll be keeping an ongoing leaderboard where we’ll eventually crown a king or queen of Hot Takes.

5. Cork Gaines thinks the Patriots “suddenly have a quarterback problem”: Tom Brady’s suspension and Jimmy Garoppolo taking the New England Patriots’ starting job while he’s gone led to plenty of hot sports takes this summer, such as First Take’s attempt to create a quarterback controversy back in July, and the takes have only been flying further after Garoppolo turned in a decent performance (24 completions on 33 attempts, 72.7 per cent, 264 yards and one touchdown) in the Patriots’ season-opening 23-21 win over the Arizona Cardinals.

The hottest may have been from Business Insider’s Cork Gaines, in a piece headlined “The Patriots suddenly have a quarterback problem, and Tom Brady’s long-term future with the team will be on the line“:

It now looks as though the Patriots have two good quarterback options, and this is a problem.

On the one hand, it’s good for the Patriots’ immediate future. But that good problem is going to very quickly turn into a headache when the Patriots have to decide between Brady and Garoppolo — and that’s coming much sooner than most realize.

If the Patriots want to keep Garoppolo, the 2017 season could be Brady’s last in New England.

Suggesting that Brady’s 2017 season might be his last with the Patriots has a little merit to it (Brady is 39, the age at which Peyton Manning retired last year, and will be 40 by the 2017 campaign; there haven’t been a ton of NFL quarterbacks who have survived and thrive past 40), but Brady is signed through 2019 and has said he wants to play until he’s 45 (2022) and he wants to play 10 more seasons (2025).

What makes this take so particularly hot is the timing. If Garoppolo lights up the NFL during this starting stint in place of Brady, and if Brady doesn’t look like his old self when he returns, sure, that could lead to some quarterback drama and potentially a tough decision this year or next year ahead of Garoppolo’s free agency after 2017.

But this is after a single game from Garoppolo, and one that was good but not mind-blowing. Ask the Seattle Seahawks how well signing a quarterback based on one game (Matt Flynn, who at least was legitimately dominant with 480 yards and six touchdowns) went, or ask Kansas City how well signing a Patriots’ backup after an entire season of starting (Matt Cassel) went. Suggesting that the Patriots “suddenly have a quarterback problem” at this point is pretty fiery.

4. Joe Schad wonders if Kenny Stills’ anthem protest might have led to his drop: The anthem protest hot takes continued this week, and one of the spiciest came from former ESPN college football reporter Joe Schad, who the network parted ways with this spring and who’s now a Miami Dolphins’ beat writer for The Palm Beach Post. During the Dolphins’ 12-10 loss to the Seahawks Sunday, Schad wondered on Twitter if a dropped pass from Stills might have been about his participation in a pre-game anthem protest:

Schad then turned this into an entire column (one somehow filed under “2016 preseason”?) despite Stills denying there was any correlation, and that column had some further hyperbole:

In the moments after Stills’ drop, I tweeted, “I wonder if Kenny Stills’ long TD drop was at all related to distraction and anxiety of pregame anthem protest participation.”No, this was not sarcasm, as some wondered.

No, this was not parody, as some ascertained.

I sincerely wondered, as I would say in a clarifying tweet, “My point was pass drops are mental and I wonder if there was a lot on Stills’ mind. It’s fine if you think no way.”

After the game, Stills was asked if there was any chance that the events of the pregame affected him on the field.

Predictably, Stills said, “No, we knew it was a big deal. But the game is the game.”

On this 15th anniversary of 9-11, the decision of some NFL athletes to sit or kneel during American national anthems has been remarkably polarizing. When I asked Stills what he was thinking about while he was kneeling during the national anthem, he said he was praying.

I’m praying that the actions of these players create not further divisiveness on teams, in cities and in our country. But that they do what they are intended to do – draw attention to incidents and circumstances in our country that can be better.

For purposes of these standings, let’s pray that Schad keeps bringing the 🔥 this season.

3. Skip Bayless says Trent Dilfer’s comments smack of a “plantation mentality”: Dilfer’s comments on Colin Kaepernick “tearing at the fabric of the team” and his job as a backup quarterback being to “be quiet” were fiery enough in their own right and also considered for inclusion here, but Bayless’ reaction to Dilfer was perhaps even stronger:

“Obviously, I’m not black, but this is one thing I do know, after years and years of working with a lot of black players and black commentators on many networks, if you go to the place where you’re telling a black man or a black woman that ‘You should know your place and stay in it,’ when you get to there, them’s fighting words! That smacks of plantation mentality. You cannot go there, and he went there. Because no matter what you’re trying to say in the football context, we’re not in the football context any more. We have risen above it to an issue that is far more important than any football game.”

This is where we point out that just because a take is hot doesn’t necessarily mean it’s bad; there’s an argument that Bayless is right on the money here in terms of criticizing Dilfer. Saying a former colleague has a “plantation mentality” is definitely bringing the heat, though.

It doesn’t take much in-depth searching to find the Central Michigan University’s core values on its website.

The first one listed: integrity. It’s the quality of being honest and having strong moral principles.

CMU has the opportunity to embody that.

…The play that quieted Boone Pickens Stadium should have never happened. The NCAA football rulebook states that the game should have ended, despite the intentional grounding penalty. After the game, the officials admitted their hiccup. Now, all that’s left, is for CMU to accept the truth.

For the game’s result to be overturned, OSU must appeal to CMU and the Chippewas must approve it.

That’s easier said than done. The Chippewas would give up a win against a team from a Power Five conference. They would give up an easy road to tallying a 12-0 record. CMU doesn’t play another opponent ranked in the top 25 this season.

It’s not easy, but practice what you preach, Chippewas.

O’Colly editor-in-chief Nathan Ruiz appeared on The Dan Patrick Show Wednesday to try to defend this editorial (29-minute mark of Hour 2 here), but it didn’t go so well. He said “The premise of the article isn’t Central Michigan should give up the win, it’s Central Michigan has the opportunity to show integrity if they were to do so.” Right.

This would be a hot enough take if the winning school’s newspaper suggested they should give up a win thanks to an officiating error (and who’s to say there weren’t other errors made in that game that went the other way?), but from the losers, it’s downright boiling.

Did Megan Rapinoe kneel during the Thailand national anthem, a country with human trafficking issues? Because she did during the U.S. anthem

This is the “All Anthems Matter” take, and it not only vaults Isola into the lead for this week, it gives him the overall lead.