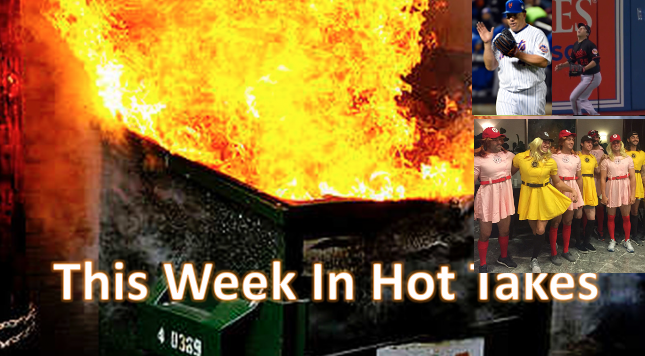 In a world that has embraced debate, there are many hot sports takes out there in any given week, and they’ve been termed “one of America’s greatest exports.” But which takes can stand out in that crowded environment? And which personalities consistently bring the most heat? That’s what we’re tracking in This Week In Hot Takes, counting down from the fifth-hottest to the hottest. We’ll be keeping an ongoing leaderboard where we’ll eventually crown a king or queen of Hot Takes. Here’s the latest edition covering Sept. 30 to Oct. 6, from your friendly neighborhood keyboard bully…

5. Jason La Canfora has strong feelings on Canada:  When he’s not creating controversies with his use of other people’s Twitter photos, CBS’ NFL insider Jason La Canfora is a rather passionate Baltimore Orioles fan. He expressed that plenty during Tuesday night’s AL Wild Card game, with lots of passionate takes on the team and on manager Buck Showalter’s hotly-questioned decision not to use closer Zach Britton. One of La Canfora’s takes particularly stood out, though, coming shortly after a Jays’ fan threw a beer at Orioles’ left fielder Hyun Soo Kim:

The fan behavior in question’s obviously terrible, but going after not just a whole fan base, but a whole country (with plenty of people who don’t even cheer for the team in question) is pretty heated. La Canfora’s poorly-spelled takes on the umpires can be thrown in for good measure, too:

This ump is an ape

These umps are total asshiles

(And yes, he presumably had to change his Twitter image to a Jays’ logo as part of a bet.)

4. Jon Heyman calls aggregators “a bunch of thieves”: From a current CBS guy to a former CBS guy, we have MLB Network’s Jon Heyman who also writes at FanRag Sports these days. In addition to original reporting from people on the ground, FanRag Sports runs plenty of stories aggregating others’ reporting and adding their own analysis, which isn’t problematic when cited properly (which they do). Someone apparently forgot to get that memo to noted-aggregation-hater Heyman:

i always love it when aggregators retweet other aggregators. thieves sticking together.

3. Terry Bradshaw: “This country’s getting worse and worse and more and more immoral and we’re rotting from within.” Bradshaw, the long-time Fox Sports NFL studio analyst, appeared on Fox News’ Fox And Friends Tuesday to talk about Colin Kaepernick and anthem protests. His take was generally somewhat all over the place (he says has no problem with the protests, but doesn’t like anything that disrespects the flag and the anthem), but it really heats up around 2:15:

Today I sat down with @terrybradshaw on @foxandfriends to discuss athletes playing a role in politics. Watch here: https://t.co/QhNaGWTFXh

“I do have a problem when people in this country don’t respect our flag and national anthem, and all you’ve got to do is look around, this country’s getting worse and worse and more and more immoral. We’re rotting from within, all great empires die from within. We can’t talk about Jesus, we can’t mention that any more, so we say religious, because if you say ‘Jesus,’ you automatically are pigeonholed and kicked off the desk.”

It’s not clear what kind of “immorality” Bradshaw is referring to here, but suggesting that the U.S. is “rotting from within” feels like a pretty hot take.

2. USA Today op-ed calls baseball players fat: Two university professors and a weight-loss CEO wrote an op-ed that somehow got published in USA Today ranting that “70 per cent of baseball players are now overweight, and one in 10 is obese.” And won’t someone please think of the children?

Their growing size is a problem for a number of reasons. For a start, children, adolescents and many adults look up to professional baseball players. The increase in body mass might suggest that bigger is better and lead people to disregard public messages about healthy weight management.

In addition, players are endangering their long-term health by trading healthy body weight for performance-based rewards. Professional baseball and the players’ union are complicit in exposing players to these long-term health risks by not monitoring body weight adequately and working to preserve players’ health beyond their active playing careers.

Maybe the problem is a standard that suggests 70 per cent of people who spend endless time training and working out and stick to careful diets for a career that literally depends on peak physical performance are “overweight.” Sure, there are some baseball players who may be heavier than they ideally should be, but it’s far from 70 per cent, and this kind of analysis is ridiculous. Yahoo’s Jeff Passan summed this one up nicely:

This is legitimately the stupidest thing I've ever read: https://t.co/9Lcg1BErDi

1. C.J. Nitkowski says “sports are not for you” to those who complain about hazing rookies by making them dress as women: Fox Sports baseball analyst C.J. Nitkowski has fired off plenty of hot takes over the years, but his comments on those who questioned why baseball teams continue to have rookies dress as women (in this case, the Mets making their rookies dress as the women from A League of their Own), and on how media shouldn’t suggest they do anything different, particularly stand out:

@max_kestler If you're that easily offended sports is not for you, yes. Way worse things happen on the field than a player wearing a dress.

@alexmcohen It is, yes. That's why the non-player has no valuable input on what the clubhouse culture should be.

@alexmcohen They are. They can report on anything they'd like. Advocating for changes in what players do there is total BS. Not their place.

@manbearwolf I don't get the need for media to whine about this. They're really that offended? Then sports is not for them.

@decoonce if you see rookies getting dressed up in those unis as crapping on that league then yes, you're PC oversensitive.

Nitkowski had a stellar trolling day all around Tuesday, also suggesting that criticism of  Showalter’s decision to avoid using Britton in the ninth was by a bunch of know-nothing nerds:

So hilarious seeing these stats heads get so worked up about Buck's bullpen moves. You mad dudes? Experience & instinct > your spreadsheet.

Oh, and he then got worked up himself about Britton not being used in the 10th inning, but that’s okay because he Played The Game®.

@bleednucksblue I'm here. That was a 9th inning tweet about the 9th inning. 10th on I'm ZB.

But the best part may have been Nitkowski’s tweet that really demonstrates why no one should follow him:

Correction: This piece initially had the Orioles’ manager as Buck Martinez rather than Buck Showalter. Martinez is the former manager who’s currently the Blue Jays’ TV announcer.