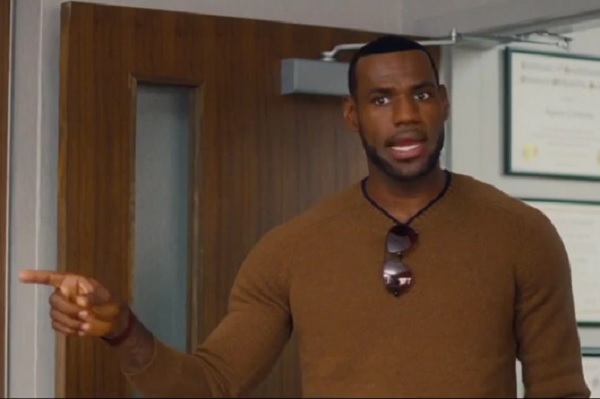 Welcome to “How is this a thing!?” where we examine the dumbest sports stories and controversies circling the sports media and incredulously ask: HOW IS THIS A THING.

LeBron James’ Twitter account will surely be studied long after all of us have left the earth.  It will replace all the history lessons about the Revolutionary War and the Renaissance and the other transformational events in world history.  Decades from now, children will be sitting in their social studies classrooms will be studying LeBron James tweets to try to understand what it says about the societal fabric of the early 2000s.  That is, of course, if we can all survive Donald Trump.

Thanks so much Dena! Love dining @MCKitchenmiami. You're INCREDIBLE!

WHAT DOES IT MEAN THAT LEBRON LIKES ITALIAN FOOD?  IS HE GOING TO LEAVE THE CAVALIERS TO GO PLAY FOR DINAMO SASSARI???

The above paragraphs might be a case of some over-the-top hyperbole… or is it?  How many headlines, SportsCenter segments, blog articles, and IMPORTANT THINK PIECES have been dedicated to what LeBron does on social media?  How much collective time and energy have we as a society wasted spent trying to psychoanalyze what LeBron does on Twitter?  Just imagine all of the work we could be doing for the common good if we put all of that time and energy spent dissecting LeBron’s every tweet into something actually worthwhile.

The latest “breathtaking” story that has dominated the 24/7 sports news cycle is LeBron’s decision to unfollow the Cleveland Cavaliers on Twitter.  In case you missed this seismic event in sports history, LeBron isn’t following the Cavs on Twitter and Instagram, everyone freaked out about it, and now he’s back to following the Cavs on Instagram but not Twitter.  He was even asked about it after a triple double in a blowout victory over the Nuggets on Monday night.  That produced one of the most surreal locker room exchanges you’ll ever see:

LeBron couldn't even think when he was asked about the unfollow https://t.co/JmHHTpyxHX pic.twitter.com/gLBRS0SzTB

That’s a thing that happened!  In an NBA locker room!  Towards a player who just had a triple double!

Of course, this could all be much ado about nothing. NBA players are not required to follow their teams on Twitter, and not all of them do. Going to the trouble of un-following one’s team, though, does seem like a curious move, one that has made the Internet beyond curious about what it could possibly mean.

Via the New York Daily News:

Could trouble be brewing in Cleveland?

The Internet — which has a lot of time on its hands — discovered on Monday that LeBron James unfollowed the Cleveland Cavaliers Twitter account.

The website DoesFollow.com confirmed that James did indeed unfollow them on March 21, 2016.

So what does this all mean?

Well, it may mean James was just filtering out his Twitter feed.

Or maybe this is his way of expressing his unhappiness in Cleveland.

Trouble could be brewing!!

And this coup de grace from For The Win, which dramatically says it’s LeBron’s fault that people care so much about what LeBron does on Twitter:

This is just another example of James creating an issue where none needed to be, and while it is unfair that his every move is broken down like this (would anyone know if, say, Ramon Sessions unfollowed the Wizards?) this is what he signed up for. He uses Instagram and Twitter constantly. You can’t build a massive social media brand and then get upset when people analyze what you do on it.

All season James has written subtweets (for those of you who don’t live on the internet: subtweets are passive aggressive tweets addressed to an unknown or implied party) and hinted at things the Cavaliers are missing. He grumbled about the team not having an enforcer, then loudly praised the newly acquired veteran Channing Frye for mixing it up for an opponent, implying to the rest of the Cavaliers: See? This is what you should have been doing. He’s posted photos of his friends on other teams — Carmelo Anthony, Dwyane Wade and Chris Paul — and suggested that they understood him better than anyone else did, fueling even more speculation by Cleveland fans that he’s looking for a way out to team up with those guys.

It’s all silly and unnecessary, especially because, again, the Cavaliers are in first place. Why even bring any of this up? And by far the most frustrating thing about it is: James is the one most responsible for the current situation in Cleveland.

This is James cooking up a hearty beef stew, tasting it, and complaining that it’s too salty. It’s hard to feel too bad for him, because, I mean, you cooked the stew, dude.

And remember… all of this is over who LeBron James follows on Twitter.

For starters, let’s ask this question – why does LeBron James need to follow the Cavs on Twitter in the first place?  Here’s what he’s missing by not following the team:

Time to close out strong.

You know why he doesn’t really need to follow the Cavs on Twitter and get play by play updates?  BECAUSE HE’S PLAYING IN THE &%$#**!!! GAMES HIMSELF!!!

Let’s see what else he’s missing out on…

Twitter and Instagram accounts are for fans of teams, not players.  Why do we immediately jump to the conclusion that LBJ unfollowing the Cavs might mean his days in Cleveland are numbered and the whole fabric of western culture is falling apart?  We have equal evidence to state that LeBron unfollowing the Cavs is going to lead him to averaging a triple double for the rest of the season.

Here’s some other outlandish conclusions we can draw from who LeBron James follows on Twitter:

1) LeBron follows Mike O’Malley, so he must be planning a GUTS reboot.

2) LeBron follows Julia Louis-Dreyfus, which must mean he was working behind the scenes to get her to replace David Blatt last season.

3) LeBron follows John Clayton, which must mean he knows the truth about Clayton’s top-secret pony tail.

4) LeBron follows Macklemore, which means his taste in music is fairly mediocre.

In case you’re looking for some kind of explanation in all of this that might make a hint of rational sense, Cleveland.com reports James unfollowed the Cavs on social media to begin his clearing of the mechanism for the postseason.  Is that the case?  Does it even matter if so?  Or have we already let this story run wild to the point where it’s satisfied our demands for the time being?

This insanity follows weeks of speculation over cryptic King James tweets to… somebody… about… something.  Random quotes about leadership and accomplishing the dream with random hashtags that could be subtle messages to his teammates, or subtweets, or secret codes to an alien race.  Who knows.

All I do know is this, when we start trying to analyze who athletes decide to follow on Twitter as one of the biggest stories of the day, we’ve all lost the plot completely.  Sports media should just give up and we should just turn over SportsCenter to Access Hollywood.  Because it’s not about the actual sport anymore, it’s about the celebrity.  Do you even remember if the Cavs played last night and whether or not they won?  (Hint, the answer is towards the top of the post.)

We try to read into things like LeBron’s Twitter habits because we have nothing else better to do with our time and because we are completely helpless in our addiction to any morsel of intrigue or mystery when it comes to celebrity life.  And that’s how this became a thing.