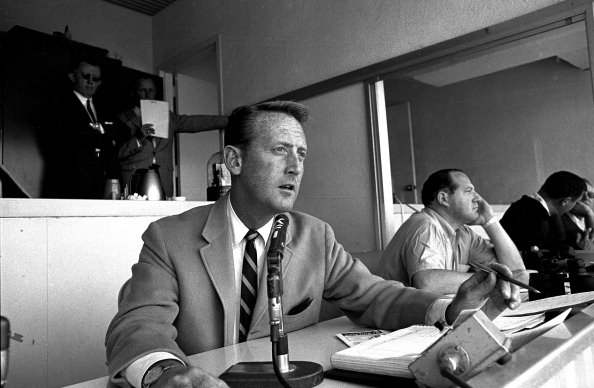 In the early years of network television, the participating World Series teams each nominated one of their announcers to broadcast the games on NBC. The two men would usually split the play-by-play. This practice gave national viewers the opportunity each year to sample legendary local voices like Russ Hodges, Mel Allen, Red Barber, Bob Prince, Jack Brickhouse, and Harry Caray.

With this setup in place, Vin Scully correctly assumed that he would announce the World Series on network television in each year that the Dodgers qualified. Indeed, beginning in 1953 and continuing through 55, ’56, ’59, ’63 and ’65, Scully did every Series game on NBC.

But in 1966, NBC vastly expanded its baseball coverage, saturating the nation with a weekly broadcast each Saturday of the regular season.

Needing a fulltime announcer and wanting a signature voice of its own, NBC put Curt Gowdy on its weekly telecasts. It also awarded him a lofty play-by-play microphone for the World Series. As a result, the roles of Scully and other team broadcasters on network television’s coverage were gradually reduced and eventually eliminated.

As such, fifty years ago, in October, 1966, when the Orioles and Dodgers met in the Series, Gowdy split the TV assignment with Scully in Los Angeles and with the Orioles’ Chuck Thompson in Baltimore. Scully and Thompson were shuffled over to NBC Radio for the games they didn’t do on television. It was the first time Scully was taken off TV in a World Series and he was upset about it.

In 1999, Gowdy, retired by then, sat on the veranda of his elegantly appointed Palm Beach home and recalled Scully’s disappointment 33 years earlier.

Curt was popular among his broadcasting peers. Marty Glickman, an iconic football and basketball announcer, told me that Curt wasn’t like other guarded announcers who covered up their game notes; protecting them like classified information.  Marty said, “Curt would happily share game intelligence of any sort with whoever inquired, including on-air competitors.”

” Vin and I made plans in the spring of ’66 to have dinner when we later had the Dodgers on our broadcast schedule,” Gowdy remembered pensively.  “As our date approached, I called Vin to finalize details and he abruptly told me that dinner was off. He had apparently found out that if the Dodgers win, his television role would be reduced. He was obviously not happy about the decision.

“I was surprised by Vin’s reaction but understood it. Heck, the World Series was then sports’ brightest stage and Scully’s role was being halved on television.”

Yet, good natured and tolerant, Gowdy, a network icon, shrugged off the incident, “Vin and I later cleared the air,” he added nonchalantly.

Monte Moore, the longtime voice of the A’s, remembered the 1974 pre-production meeting when he and Scully shared a similar assignment of radio and television for the Oakland-Dodgers World Series. According to Moore, “Word was out that Scully only wanted to do television.”

Moore said that NBC Sports executive Chet Simmons tackled egos immediately, opening the meeting firmly, announcing the play-by-play crews for both radio and TV. Simmons then paused, looked sternly around the room and suggested unequivocally that if any announcer was displeased, there were other broadcasters eager to get the work.

By 1977, when television rights to the World Series were shared alternately, year-to-year by NBC and ABC, local announcers were silenced further. Broadcaster Keith Jackson, known for football, called the games for ABC. Scully, by then unmistakably baseball’s finest announcer, was asked by ABC (some say perfunctorily so) to do only pregame work for the Yankees-Dodgers showdown. Already announcing football for CBS that fall, Scully conveniently and cordially said no.

When NBC took its turn in the rotating setup in 1978, Joe Garagiola served as the exclusive play-by-play announcer for the entire series. The page had completely turned. Local announcers’ roles on network television, a staple of the golden age, were history.

Ironically, Scully himself was hired in 1983 as NBC’s primary baseball announcer. Famously, in 1988, in a World Series game involving the Dodgers, he put his indelible signature on Kirk Gibson’s implausible homerun that carried Los Angeles to a win over the A’s. (“In a year that’s been so improbable, the impossible has happened!“)

As for his early experience, Scully told me this past summer that he can’t bear watching his own World Series work of the 1950s. Back then, he says, writers, including those with mighty pens, were critical of announcers who talked too much on television. As such, Vin, a youngster then, spoke only in measured intervals, using great restraint to caption pictures economically.

But once he established himself in Los Angeles the muzzle was off. It was clear thereafter that no other broadcaster better accentuated a game’s dramatic moment. Scully did so frequently and elegantly with a single extemporaneous oral stroke.

Many seniors younger than the blessed Scully struggle with their word retrieval and word retention, often palpable speech symptoms of the aging. Strikingly, Scully never groped for the right word on air, not even in his final season which ended just a month or so before his 89th birthday.

The master never succumbed to the tyranny of the clock. His broadcasts remained sharp and his voice mellifluous. Vin Scully could likely have continued for a number of years more. Too bad!

David J. Halberstam – halby@halbygroup.com – is the author of Sports on New York Radio: A Play-by-Play History and The Fundamentals of Sports Media and Sponsorship Sales: Developing New Accounts