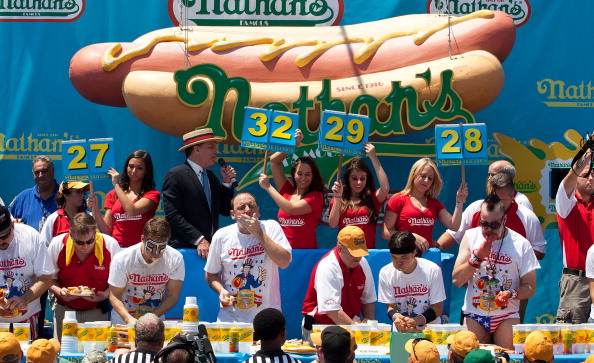 This week, European sports take the forefront of the sports action. We have the semifinals of UEFA Euro 2016 in France, Wimbledon goes to inot its second week of action and the Tour de France begins.

In ‘Murica, we have the annual Nathan’s Hot Dog Eating contest, the Olympic Track & Field Trials and MLB speeds towards next week’s All-Star Break. For those jonesing for the NBA, there’s plenty of Summer League action. Let’s take a look at what have for this week.

Once France and Iceland decide the final semifinalist today, we’ll have the final four teams to decide who will play for the Euroepan Championship next Sunday. After spending the last week on ESPN2, Euro 2016 returns to the Mothership this week. Both semifinal games will be played on ESPN. The games will be played on Wednesday and Thursday at 3 p.m. ET with pre-match shows at 2:30.

Unlike the World Cup and Copa América, there is no third-place match.

Here’s how the schedule shapes up this week:

The final will take place next Sunday at 3 p.m. ET on ESPN which will be quite a doubleheader day with the Gentlemen’s Singles Final on ESPN at 9 a.m. and then the Euro 2016 Final at 3 p.m.

The glorious fortnight goes into its 2nd week and with rare action taking place on the middle Sunday today, it means the Big W can back on schedule after rain hit SW19 in the first week. Starting on Monday with the Round of 16 through Wednesday’s quarterfinal round, ESPN and ESPN2 will be airing matches simultaneously. ESPN will focus on the matches on Centre Court while ESPN2 will show the matches on Court 1 and the outer grounds at the All England Lawn Tennis and Croquet Club.

Here’s how the schedule looks for this week. All times are Eastern:

The Tour has already begun and the 22-day long event will run through the country of France through its grand cities, small towns and big mountains. NBCSN will provide live coverage during the week with NBC providing live coverage next Saturday. The familiar voices of Phil Liggett and Paul Sherwen will call their 31st Tour together. They’ll be joined by former cyclists Christian Vande Velde and Jens Voigt as analysts. Hosting will be Paul Burmeister and Todd Harris and they’ll be joined by analyst Bob Roll and reporters Steve Schlanger, Jenna Corrado and Steve Porino.

NBCSN or NBC will air live coverage each morning with replays in the afternoon and then primetime replays each evening.

Here’s the schedule of live coverage this week:

Major League Baseball begins to transition to the second half of its season. Tonight is the first-ever MLB regular season game to be played on a military installation. The Miami Marlins will face the Atlanta Braves at Fort Bragg, NC in what is hoped will be an annual event. ESPN will air the game live.

For the 4th of July, MLB Network airs a tripleheader while ESPN will show two games.

This Friday, NHL on NBC voice Mike Emrick will have the opportunity to call a regular season baseball game for the first time as he and Bob Costas will be on hand for the Chicago Cubs-Pittsburgh Pirates game on MLB Network.

Here’s your schedule for this week:

Here’s the schedule for this week:

The Women’s U.S. Open takes place this week at CordeValle in San Martin, CA. FS1 and Fox will combine for coverage

With the PGA Tour cancelling this week’s scheduled Greenbrief Classic due to the massive flooding in West Virginia, Golf Channel has adjusted its schedule by extending its coverage of the Web.com Tour’s LECOM Health Challege from 1:30 p.m.-4 p.m. ET on Thrusday and Friday and 1-4 on Saturday and Sunday. It then airs the Champions’ Dick’s Sporting Goods Open at 4 p.m. from Friday through Sunday.

CBS will air last year’s Greenbrief Classic in its PGA Tour windows on Saturday and Sunday.

NASCAR heads to Kentucky for its Camping World Truck (Buckle Up Your Truck 225), Xfinity (ALSCO 300) and Sprint Cup Series (Quaker State 400). The Camping World Truck Series race will air on FS1 on Thursday at 8:30 p.m. ET. NBCSN airs the Xfinity race on Friday at 8:30 p.m. ET. The Quaker State 400 will be shown Saturday on NBCSN in primetime at 7:30 p.m.

IndyCar goes to Iowa for the Iowa Corn 300 and NBCSN will air qualifying on Saturday and the race on Sunday at 5:30 p.m.

Formula 1 goes to Silverstone for the British Grand Prix on Sunday. CNBC will air the race next Sunday at 7:30 a.m. ET. NBCSN shows the practice and qualifying sessions on Friday and Saturday.

UFC is busy this week. There’s the Ultimate Fighter Final live from Las Vegas. FS1 airs the prelims and main event on Friday beginning at 8 p.m. ET. Then there’s the Cormier vs. Jones 2 event to be held at the T-Mobile Arena on Saturday. FS1 has the prelims at 8 p.m. ET and the main event will be on pay per view starting at 10 p.m.

What would the 4th of July be without some gluttony? The annual Nathan’s Hot Dog Eating Contest takes place from Nathan’s on Coney Island in New York. ESPN airs it on a tape delayed basis Monday at 3 p.m. ET. ESPN3 through the WatchESPN app will have live coverage beginning at 10:50 a.m. through the conclusion at 1 p.m.

Ane there you have what is on TV this week.