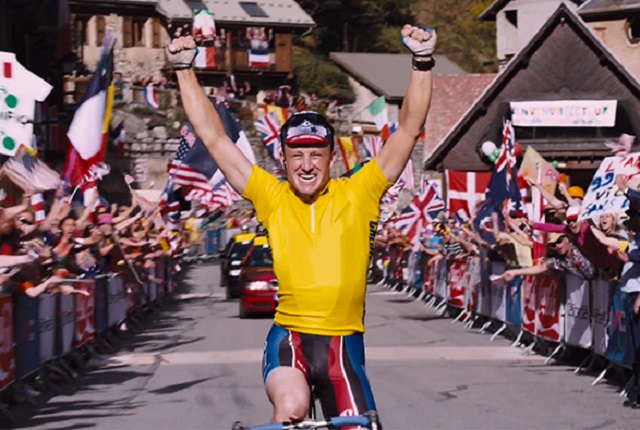 The Program begins with Lance Armstrong bicycling by himself up a mountain road. Just a man, his bike, the open road and the obstacles of a steep incline and the thinner air that comes with it. While the circumstances seem daunting, the setting is quiet and peaceful.

In his mind, this is how Armstrong (played by Ben Foster) appears to see himself. He’s battling the course, with its hills and winding roads. But mostly, he’s battling himself, pushing himself through his mental and physical limits. Armstrong later describes himself to reporter David Walsh (Chris O’Dowd) as just a guy who loves to ride his bike. He’s motivated by love of the sport, love of getting better, love of winning.

If only Armstrong’s life and his quest to become the greatest cyclist of all time was that simple. As we know all too well, the story becomes far more complicated. It might even be too complex a narrative for The Program to handle in two hours.

Foster has been a fine actor doing great work in movies for quite some time, but probably hasn’t gotten the recognition he’s deserved because he hasn’t landed a showcase role. He has one with Armstrong. Foster transforms himself, becoming a near-doppelganger of Armstrong in this film.

It’s not just the physical look either. Foster has taken on Armstrong’s mannerisms, his defiance and arrogance, his unyielding desire to be the best at his sport, regardless of who he has to run over to achieve those goals. Perhaps most importantly, he embodies the ability to lie, to lie so often and with such believability that he probably believes it all on some level.

As director Stephen Frears told Awful Announcing in an interview, he did not want to make a standard biopic that tried to sum up the life of its subject from hopeful youth to accomplished adult to fall from grace to possible redemption.

Yet the story of Armstrong’s ascension to cycling glory and international superstardom can’t be told without establishing where the man and his career began. He was a good American cyclist, successful in this country, but couldn’t conquer the European courses and competition. Before one race begins, a fellow competitor explains to him how he can’t win because the game is rigged. The successful cyclists have more red cells in their blood, more oxygen to provide fuel for their engines. Sure enough, Armstrong is left in the dust despite pushing himself as far as he go.

That lays out the central dilemma for Armstrong. Do he and his team keep losing in these races on an uneven playing field? Or do they try to match the competition by taking the same steps they do to excel? Armstrong doesn’t come right out and say it but his teammates, defeated and weary, know what he’s getting at. “I’m not doping,” one of them says. But in Armstrong’s view, there’s no other choice. The same teams consistently finish at the top during every race. There’s only one way to beat them.

That means going to trainer and doctor Michele Ferrari (Guillaume Canet) and trying to get on the same program that he puts his championship cyclists through. When questioned by the media about his cyclists using performance-enhancing drugs like EPO, Ferrari scoffs and attributes the team’s success to their excellent training and physical conditioning. But it’s a rather open secret among the cycling community.

Armstrong goes to Ferrari virtually begging for help. Ferrari briefly acts like he doesn’t know what “program” Armstrong is talking about, but the cyclist clearly knows what is going on and his desperation apparently appeals to the trainer. Ferrari quickly gets to the problem of why Armstrong isn’t winning and will never beat the competition. He has the wrong body type. Too much muscle to push up those hills. He’s not built like an elite cyclist. Ferrari claims he can’t help Armstrong.

So the cyclist and his team decide to take matters into their own hands, going to Switzerland to buy as much EPO as they can from a local pharmacy. The PED regimen quickly yields benefits as Armstrong begins winning races he was previously losing. Those steep climbs he could barely push through are easily conquered.

Armstrong’s new success catches the notice of The Sunday Times reporter David Walsh (Chris O’Dowd), who admired the American underdog trying to prosper against far more accomplished opponents in a sport that generally views him as an outsider.

Initially, Walsh enjoys Armstrong’s emergence. The guy he’s been rooting for is suddenly winning. But as he watches the races more closely, particularly the footage of Armstrong, it soon becomes clear that the previously underachieving American cyclist is making turns at speeds that weren’t achievable before. Those steep climbs are no longer obstacles. Simply training harder isn’t a suitable explanation.

There’s really only one answer for Armstrong’s frequently winning races after finishing far behind previously. Walsh seemingly hates to pursue the truth, but as Armstrong crafts his image — he’s just a guy who likes to ride his bike — the sportswriter feels deceived and becomes particularly motivated to uncover those lies.

Armstrong’s career does suffer a significant setback as he’s diagnosed with cancer. Amazingly, the grueling chemotherapy treatments and the weight loss they caused actually help Armstrong rebuild his body into the lean model that Ferrari idealized for elite cyclists.

That helped create an inspiring narrative of a man fighting back from a devastating, often fatal disease to eventually become one of the best athletes in the world. And as you surely know, Armstrong himself was compelled to become a role model for cancer survivors, starting the LiveStrong foundation and becoming an international symbol of perseverance. But how much of that story was built on a lie?

Frears said he set out to make a crime film with The Program, and several sequences play out like one. The scene in which Armstrong and U.S. Postal Service team manager Johan Bruyneel (Denis Ménochet) are trying to get enough water in his system to avoid testing positive for EPO plays like a carefully timed heist operation. Walsh is basically the law enforcement officer in pursuit of the criminal who’s gotten away with his transgressions for far too long and hurt too many people in the process.

If the story focused primarily on the chase between Armstrong and Walsh, or even Armstrong and his carefully crafted narrative and image, The Program might have been an especially gripping film. But there are too many other moving parts that need to be addressed to tell the complete story.

Whether it’s the script by John Hodge (Trainspotting) or a choice by Frears in his direction, the story seems to become more interested in Floyd Landis (Jesse Plemons), and his inner conflict over the decisions he has made to achieve the ultimate success in his sport. Landis is portrayed more sympathetically, someone who wanted to escape his Mennonite background and was dazzled by the opportunity to join Armstrong’s team. But he became corrupted like everyone else.

As the film progresses, Frears and Foster depict Armstrong as too much of a villain, someone who almost becomes inherently evil in his callous ambition and devastating contempt for anyone who tries to undercut his achievements. But Armstrong also comes across as an extremely lonely person throughout the story, which adds an element of tragedy to the portrayal. He’s essentially imprisoned himself with the lie he’s constructed, and the friends and associates he’s alienated during his ascent to stardom.

Unfortunately, Frears has given himself so much to cover as Armstrong’s world slowly, but surely, crumbles that he doesn’t really have an opportunity to fully explore that angle and ends up charging toward what feels like a rushed ending (and moments that have to be mentioned, like the Oprah interview) to bring the story to something resembling a full circle.

The Program is currently available On Demand and Digital HD.