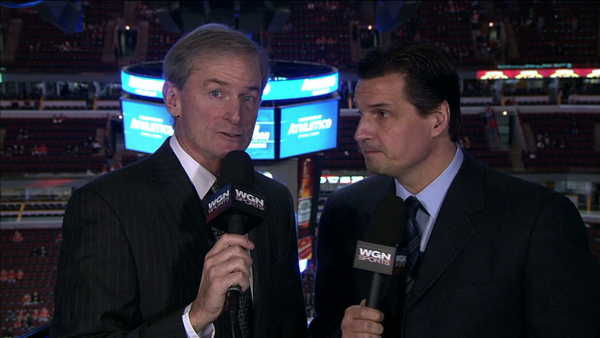 Recently, we ran a series of articles asking hockey fans to grade their local announcers. You responded in a big way and the result is the extremely thorough, totally scientific rankings you’ll find below.

There may be a few outliers, but we feel the final product is a pretty fair representation of how hockey fans view announcers around the NHL.

The Penguins had the highest percentage of F grades, and it wasn’t close. The Pens’ broadcast is among the top homeriffic broadcasts in the league, and Steigerwald’s low energy is more noticeable next to Pens radio legend Mike Lange.

My hate for Paul Steigerwald amplifies by 37 thousand when he commentates playoff games.

It’s love them or hate them. But you have to notice them, as the Bruins got more total votes than any team in the NHL with 987. Jack Edwards’ over the top homerism is adored in Boston, as this team actually got 20% A grades, I’m guessing mostly from New England. Edwards’ schtick isn’t so well loved outside of the region, as they also got 37% F grades. There is no in between in Boston. Here are some examples as to why:

When it comes to homerism, Mike Haynes is the Hawk Harrleson of the hockey world. Nobody has a gap between Avalanche goals and opponent goals as wide as Mike Haynes. First the good …

And now the bad …

Now we get into the soft underbelly of mediocre, as the teams start to get less and less hated. The Wild’s team of LaPanta and Greenlay fall below 20% of F votes, but a lot of C’s and D’s keep them down.

Great line by @AnthonyLaPanta "Koivu accepts a check from Roussel like he didn't even notice it."

Taking shots gives you a better shot at scoring? Thanks for that, Mike Greenlay.

Sorry, but Mike Greenlay is just background noise. Couldn't recall a bit of his wisdom from period one.

This was a season of transition for the Predators as they sent Pete Weber to the radio side while his long time partner Terry Crisp now mans the studio. Daunic and Grimson have some work to do to win fans as television newbies, as they got the lowest percentage of A grades on the board.

Willy Daunic and Stu Grimson, is there a worse group of commentators? @PredsNHL I'll watch on mute.

@bvalentine615 major beef with Willy Daunic's voice. The least timeless and dramatic of all voices?

So Willy Daunic is talking about Hawks draft picks having four letter last names. Shoot me.

Voters weren’t kind to the Leafs broadcasting crew with most of the negativity being pointed towards Romanuk. Looking his name up on Twitter is a bloodbath, as his broadcast name mistakes are pointed out often. Randorf seems to be a lesser of two evils, although personally I think he’s solid. The broadcast crew had a 22.15% F rating.

Do you enjoy Paul Romanuk's commentary?

Paul Romanuk doing national games is embarrassing for Sportsnet as a network.

Jeff Rimer is known as one of the best play-by-play announcers in the game. Former enforcer Jody Shelley is starting to find his game after three years as the Jackets’ color man. Shelley was a fan favorite as a player so there are a lot of B’s and C’s for this crew. But a lack of A’s keep the Jackets announcer score down.

Really love @shelleyhawk45 as announcer for @BlueJacketsNHL. Always insightful and on point.

@shelleyhawk45 Wonder what Jackets would be if him and Fox crew ever called it like it really is…Jackets stink! Most homer group in NHL.

The Panthers guys have more extreme votes than Columbus. More votes overall, and a higher percentage of A votes. But they have more D’s and F’s too in the 708 votes that they got. The Panthers announcers in general are known for being energetic between Goldstein, Potvin, and their radio guy Randy Moller.

Denis Potvin. The most insane color analyst in hockey. Can't wait 'til the Cats win the cup & his insanity is on every winning call on ESPN.

Sounded like Denis Potvin was angry enough to lick peanut butter off bread with his fingers.

Denis Potvin on the Florida feed was just screaming about the clear holding call on Pacioretty. He was screaming "That's a ridiculous call!"

This booth is rough. Cangialosi always seems more comfortable with the slower-paced soccer matches he does for MSG than the chaotic pace of hockey. He also borrows from Doc Emrick, whom he replaced four years ago, and it’s grating. Daneyko never knows what just happened on that sequence despite seeing three replays and is as close to openly cheering for a team as you can get.

Who's the worst announcer in the #nhl? I would say Jack Edwards. Steve Cangialosi also pisses me off.

@ejmaron @Fffeisty Sherry does color on the radio. Doc was replaced by Steve Cangialosi, who is actually pretty good but obv. not Doc.

The Canadiens broadcasters received a high average grade and a fairly low ranking which is indicative of how Habs fans are split on the duo. Nearly 18% of voters gave them an F. Either you like them or you don’t. Viewers seem to tolerate Bartlett much more than York.

Bartlett is great, but York is terrible to listen to. #Habs #Sportsnet