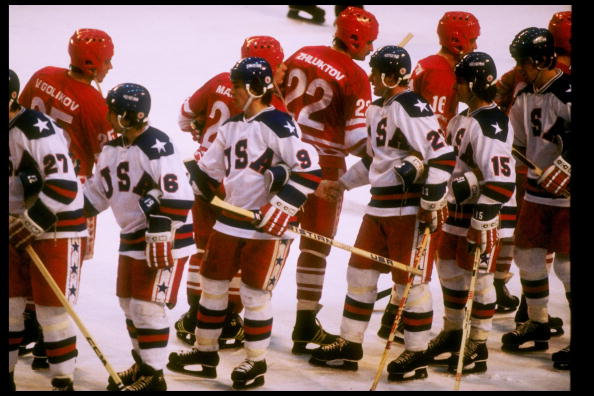 Thirty six years ago tonight, one of the biggest moments in U.S. sports history took place. Of course, it was the USA vs. USSR ice hockey semifinal game in the 1980 Winter Olympics in Lake Placid, NY. Even if you weren’t alive when the game took place, you’ve most likely seen the iconic foutage with the call made by Al Michaels on ABC (“Do you believe in miracles? YES!”).

You may have even seen the movie Miracle that also has Michaels recreating his iconic calls with analyst Ken Dryden. But you may not be aware of another call made by Curt Chaplin who is known as the in-court reporter on “The People’s Court.” Back in 1980, Chaplin was a reporter for ABC Radio, assigned to cover the USA-USSR game. Chaplin’s job that night was to get reaction and cover the scene in the arena that is now named for Herb Brooks, the man who coached the 1980 Olympic hockey team to a gold medal in the tournament.

Because ABC TV and Radio was the rightsholder of the Lake Placid Olympics, Chaplin pretty much covered everything, ski jumping, speed skating (including Eric Heiden’s five gold medals), downhill skiing and the hockey. And while Michaels called the game on TV and the late Don Chevrier had the official radio call, Chaplin decided to do his own call positioning himself at a spot in the arena where he could see all of the action. In an interview I conducted with Chaplin in 2008, he said he couldn’t just sit and watch, he wanted to have his own call as well, “I knew the game was too big to just watch. So, I found a spot to stand on a camera platform, about 20-30 feet away from where Michaels was sitting, turned on my cassette recorder and did my own play-by-play into the recorder, start to finish. It was the ONLY hockey game I ever called in my professional broadcasting career.”

Chaplin recorded the game on three different 60 minute tape cassettes, one for each period, but they sat in his house for years, until one day, he decided to record them onto CD for safe keeping. But then, he decided to sync his recording of the game with the TV footage and put it on YouTube, “A friend of mine from ABC Sports had once given me a copy of the game as a gift (on VHS! That’s how long ago it was!). So, I had all the ingredients….the call on CD, the video on VHS. In the interim, video editing technology had evolved to the point where off-line video editing software was now available for home computers. And, more importantly, the advent of YouTube made it possible to make video available to a mass audience. When, I put those ideas together I realized this, finally, was my chance to satisfy my lifetime dream. So, I bought the software and went to work on my dream project.”

As you watch the ten minute video on YouTube (unfortunately not embeddable, so you must watch it there), you’ll notice that Chaplin has all of the Soviet players names down pat. He said that he had done his homework on the USSR team even watching a previous matchup in New York just a few weeks prior, “I’d watched the Soviet Red Army Team for years. I knew every player. I’d covered the USA-Russia exhibition game at Madison Square Garden a couple of weeks earlier (where the Russians crushed the Americans). And I had been studying the Russian Olympic Team names and numbers for days leading up to the climactic game. I was ready.”

So Chaplin knew the players, had done his homework and once inside the arena, he could feel the electricity and started cailing the game, “I turned on my tape recorder and started doing play-by-play from the opening face-off. In case something remarkable happened, I wanted to make sure I had it. It was a bit strange, doing the play-by-play into my cassette recorder. So, I found a perch next to an ABC TV camera, on the camera platform, where no one would pay any attention to me. As soon as Buzz Schneider scored to tie it 1-1 midway through the 1st period, I knew we had a game, and a potential huge story, on our hands and I didn’t care, anymore, who could hear me, or not. I wrapped myself in the game and called it as best I could.”

Chaplin said his thinking behind calling the game was to have highlights at the ready so ABC Radio could use them in their sports updates if it desired, but it never came down to that.

At one point, Chaplin did sell audio copies of his call on a 60-minute cassette, but as for the video, he’s happy to have it on YouTube so people can watch it at their own leisure, and will never sell copies of that version, “No. It is purely a labor of love. I would never want to sell it. However, I have given away some copies of the full 60-minute version. Yes, there is a full game version of what you’ve seen on YouTube.” He said he has given a copy to goalie Jim Craig who wrote him a letter praising his call, “He said he was in tears when he listened to my call. I wish I could give one to every player on that team.”

The USA-USSR game was the only hockey game Chaplin would call, but he certainly chose a memorable one to do.