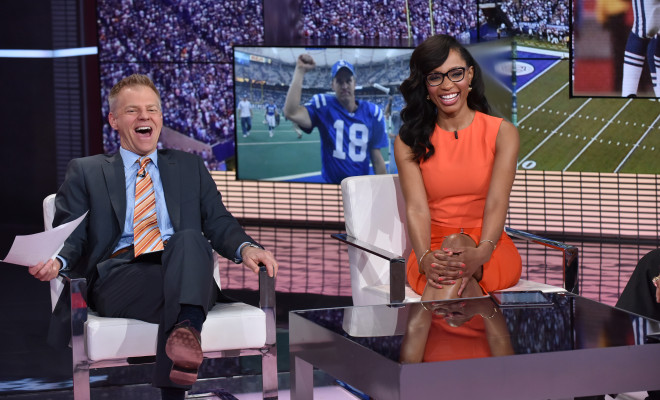 Big changes are in the works for the noon to 1:30 p.m. Eastern edition of ESPN’s SportsCenter. The show will retain co-anchors David Lloyd and Cari Champion (pictured above), but while Lloyd will remain at ESPN’s main campus in Bristol, Connecticut, Champion will be working from the network’s Los Angeles Production Center. The idea is to improve the mid-day show’s access to Los Angeles-based guests and analysts:

“This is a move we’ve been planning for some time to increase the scope of what SportsCenter can do,” said Scott Clark, ESPN coordinating producer, who oversees the daytime editions of SportsCenter. “It’s going to be a new, different look for the show, as well as a bigger feel, and will continue to evolve what SportsCenter is.”

The show’s format change is expected to expand the pool of in-studio guests and analysts to include many based in the Los Angeles area, complementing the midday SportsCenter’s conversational format that reflects a time of day demanding an evolved discussion of the most compelling events and storylines.

“We think we can elevate what we get guest-wise by being in LA, and it’s a big part of the move,” Clark said. “Adding guests from LA to the lineup of strong guests we already get in Bristol will make the show even better.”

It makes some sense for ESPN to do this to enhance the midday show’s access to guests and analysts, but there could be some challenges here, especially from the extra costs and challenges in doing a show from two locations. Fortunately, Lloyd and Champion at least have some experience working together, which should help keep the show running smoothly:

Lloyd and Champion, who have been hosting the midday show together since February, will continue their interaction with guests and analysts as well as their popular segments “Explain Yourself” and “Top 5.” Both feel that their experience working together will help them with the show’s new format.

“The chemistry that we’ve developed already surprised me,” said Lloyd, an ESPN anchor since 1997. “We didn’t really know each other at all going into this, but for some reason, we’re of the same mind when we go out there and we have a great time doing SportsCenter together.”

“We’re dedicated now to keeping up the chemistry,” said Champion, who joined ESPN in 2012 and became a SportsCenter anchor in 2015. “We’re making sure that’s priority number one. We’re trying to do something different and he allows me to be me and I allow him to be him, which is why it’s so good. We don’t get in each other’s way – we complement each other. And that’s probably the best relationship you can have and a rare one in this television biz.”

We’ll see how going bi-coastal works out for ESPN. Hopefully it will be easier for them than it was for Sterling Cooper Draper Pryce…