The presidential election is less than seven weeks away, and political sites and blogs like ESPN’s FiveThirtyEight are predictably seeing large spikes in web traffic.

FiveThirtyEight has been capitalizing on its election year popularity with a series of live podcasts in different cities across the country, most recently on Monday night at Times Square in New York City. The success of its election podcast and its live episodes is making FiveThirtyEight think about the future of the political podcast beyond election day, but the expansion of its podcast network and live shows to other topics and subjects the site focuses on.

Awful Announcing spoke with Editor-In-Chief Nate Silver and Managing Editor David Firestone about the present and future of FiveThirtyEight’s podcast network and the site as a whole.

The so-called election year bump is definitely real at FiveThirtyEight, according to site and podcasts metrics they provided.

“According to the latest comScore metrics for the month of August, the site attracted 9.5 million unique visitors — the second highest total in its history,” an ESPN spokesperson told AA via email.

The site’s real time Election Forecast, which factors in national polls and proprietary metrics to predict the outcome of presidential and senatorial elections in every state, was the most popular piece of content across all ESPN properties, according to the provided metrics. FiveThirtyEight podcasts across the board were downloaded over 7.8 million times in August alone, a 422 percent increase from February.

“The podcast has proven to be shockingly successful and popular for us,” Silver told Awful Announcing.

“It’s easy to say it’s because there’s so much interest in the election, which is certainly the case,” Firestone told Awful Announcing, “but I also think that the mix of people that we have [on the podcasts] and the high level of conversation that they have among them is the reason.” 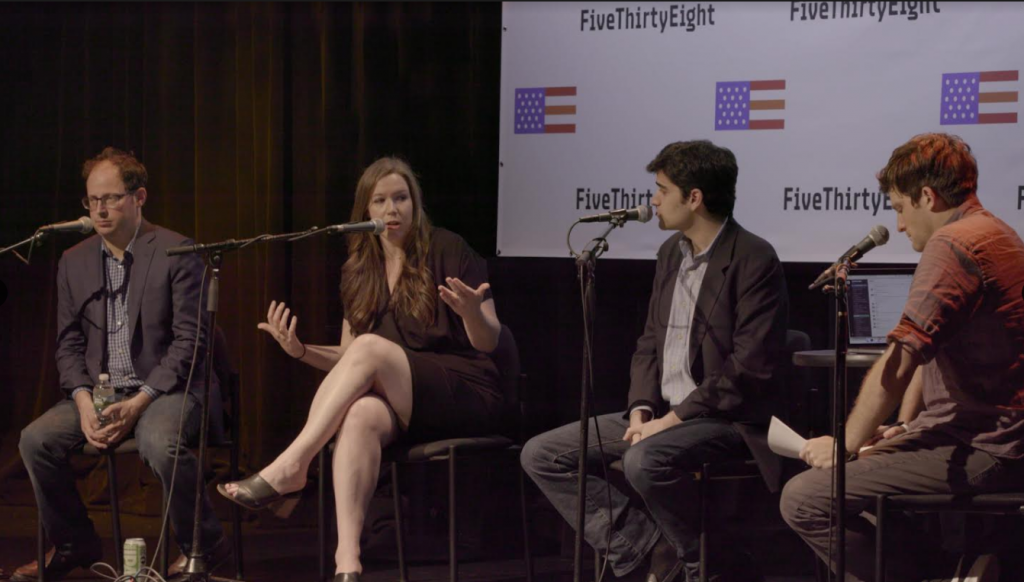 “We had no idea if anyone was going to click on us or buy tickets, and we were completely astonished the first time when it sold out in like an hour or two,” Firestone said. “And we immediately realized ‘whoa, this is something.’ We have a bit more of a phenomenon than we even realized. We had to keep this going.”

So a sold-out crowd of 2,100 packed the PlayStation Theater on Monday to see and interact with Silver, Harry Enten, Clare Malone, Farai Chideya and host Jody Avirgan. They discussed how the recent bombings in the New York City area would impact the election, a preview of next week’s first presidential debate, some election trivia and the quintet conducted a Q&A with the live audience.

“The purpose of podcasts in general is, I think, we deal with some very technical and dense material, but we still want it to be relatable,” Silver said. “You want to talk to people like they’re our friends or our colleagues.” And the live podcasts take that to another even more intimate level, he said.

“It’s been amazingly popular,” Firestone said. “It’s just a great way for us to meet our readers, hear what they have to say and also take our brand and some of our best people on the road and get everybody a chance to get to know them.” 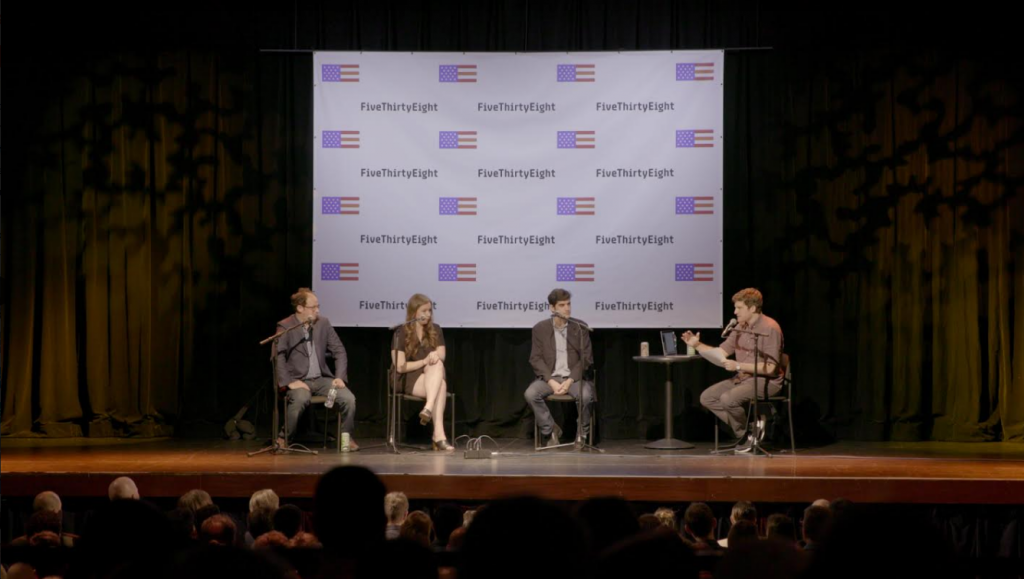 “What we found is that people really love seeing in person the people they’ve been hearing through their headphones, on their car radio, however they’re listening,” Firestone said. “They want to see them live.”

As the election season is coming to a close, FiveThirtyEight is contemplating and evaluating what they should do next with podcasts. The pre-election bump will almost certainly come with a decrease in unique readers, downloads and revenues.

“We haven’t really decided how much to invest in this and whether or not it’s worth sending our staff out on the road on a regular basis,” Firestone said. “One of the things we need to determine is whether or not we can sustain this past the election. And we also have to determine what other kinds of podcasts we’re going to have after November.”

Firestone said that the site is seriously considering starting podcasts in other subject areas FiveThirtyEight covers, including science and economics. The live podcast model is definitely working in this election year, and Firestone, Silver and other ESPN brass now need to determine if it will be a major part of their business model in years to come.