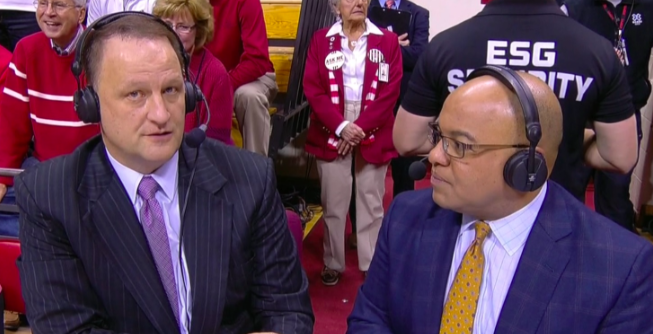 With the official news of Mike Tirico’s departure from ESPN to NBC and the news of Sean McDonough’s promotion to Monday Night Football, the domino effect we’ve highlighted previously has now well and truly begun.  With these changes now underway though, it is appropriate to take a look at three well-entrenched broadcast pairings at ESPN that have now been broken up as a result of change.

It’s really hard to believe that Tirico and Gruden had worked Monday Night Football together since 2009, with Tirico having been the lead NFL play-by-play man at the WWL since 2006.  Of the three booths that have been disbanded, perhaps this would have the most mixed feedback, although that would largely lay at the feet of Gruden.  Still, it is indisputable that Tirico has gotten the most out of Gruden as a color analyst in the last several seasons.  It was easy to see that Gruden respected Tirico with his pedigree in broadcasting, which certainly forged a palpable chemistry between the pair.  Certainly, Sean McDonough is as likely as anyone to build on the good work Tirico did in the broadcast booth on Monday nights.  But, unquestionably it will take time for Gruden and McDonough to match the chemistry of Gruden and Tirico… or at least time until Gruden feels free to get weird around McDonough.

Perhaps our personal favorite on this list is another testament to Mike Tirico’s versatility and professionalism as a broadcaster.  Through their time together, it was clear that a mutual admiration existed between Tirico, Dakich, and their entire crew, including those working behind the scenes. Dakich does what few college analysts do – he tells it like it is.  And that means there’s a lot of people who aren’t fans of DD… just ask people who live in Iowa or former Buckeye Amir Williams.  However with Tirico, Dakich was able to do what he does best as a game analyst – be himself.   And maybe that’s Tirico’s best trait as a play-by-play man.  He’s professional in delivering the game broadcast while leaving plenty of room for his analyst to shine (with maybe one noteworthy exception, depending on who you ask).

The most underrated team in this list has the tendency to be lost through the plethora of college football offered up every Saturday.  But, this crew also had the distinct ability to make any game they were calling feel important.  Spielman’s greatest strength as an analyst has been bringing a sense of urgency to every game, every quarter, every snap.  Adding Todd McShay as a sideline reporter/field analyst gave a unique addition to the crew by being able to view collegiate players through the lens of the NFL Draft, which has only become a bigger event on the sporting calendar every year.  And keeping the crew together was McDonough, who has always had the innate ability to rise to the moment when necessary.  In fact, dare we say that this might have been the best crew calling college football week to week around the country.

The three booths varied in popularity, however it is fair to say each had a unique chemistry that resonated with viewers.  And perhaps, the greatest compliment is that these booths will be missed even more once they are gone.  So now ESPN has to look to reload and find people who can come together to match the same levels of chemistry and deliver a product that can maintain the entertaining, quality broadcasts these groups put together.