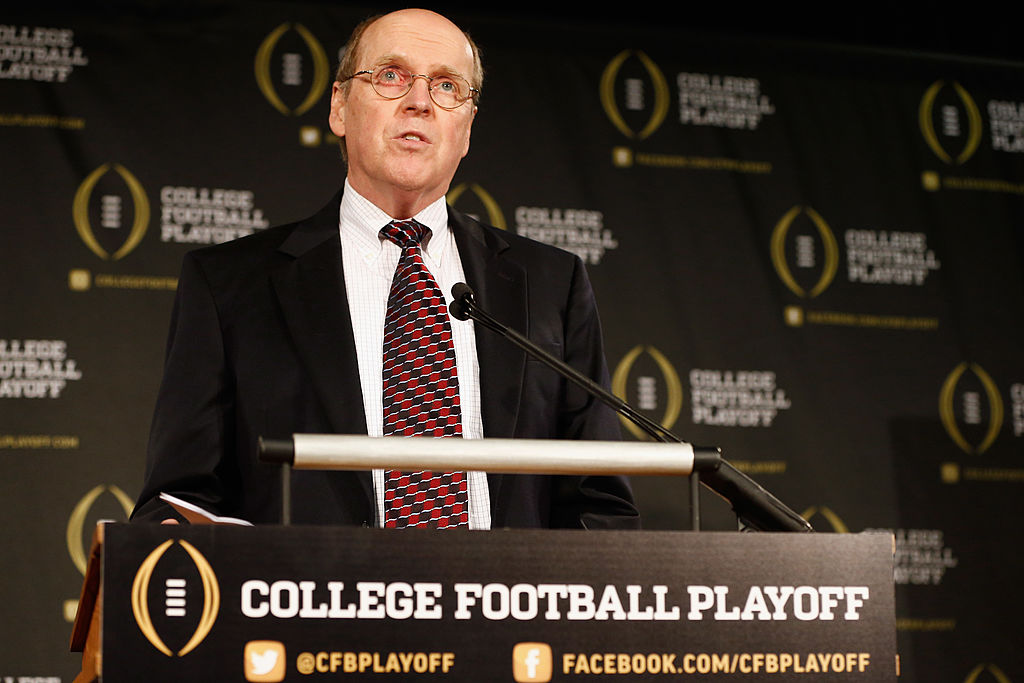 Anyone with even the slightest sense of how the world works knew this was coming.  In a world that can’t wait to stake a claim with its bold predictions, this was the easiest call on the board with the shortest odds imaginable.

Last year’s CFP semifinals on New Year’s Day were enormous successes.  Finally college football had its proper January 1st showcase once again and all finally seemed right with the world.  The first semifinal at the Rose Bowl drew 28.2 million viewers.  The second semifinal at the Sugar Bowl had 28.3 million.  Those audiences have only been surpassed by the National Championship Game between Ohio State and Oregon which amassed 33.4 million viewers.  Alas, because of the backroom deals made with the Rose Bowl and the Sugar Bowl and the irresistible force in college athletics that is protecting the power interests of the powers that be, we’re stuck with only living that out once every three years.

After a sparkling debut that thrilled fans and drew the largest audiences in the history of cable television, the College Football Playoff was due for a massive letdown.  But the letdown isn’t because of any sophomore slump, not because the newness or excitement had wore off, nor because of the teams that were involved.  No, it was solely because of the stubbornness, the self-importance, and the sheer foolishness of the powers that be in the sport.

“We really do think we’re going to change the paradigm of New Year’s Eve.” – Bill Hancock, executive director of the College Football Playoff.

It takes an awful lot of chutzpah to think that you’re going to change traditions that our culture has been celebrating for decades overnight.  Either that, or complete and total ignorance to the realities of American culture and society.

College football was never going to change the paradigm of New Year’s Eve, it was going to create a massive inconvenience for anyone who cared about either one.  By placing its semifinals at 4 PM ET and 8 PM ET on December 31st, they accomplished the double whammy of preventing fans around the country from watching the early game at work and the late game being out celebrating – quite the double play combo.  Well, it did accomplish one thing… at least ESPN gave some great cross promotion to Dick Clark’s Rockin’ New Year’s Eve with Ryan Seacrest.  Surely scores of football fans flipped over to ABC to watch Demi Lovato when that alert flashed on the screen.

Of course ratings and viewership were going to drop for this year’s semifinals.  There was no other option.  (Unless you were counting on that incredibly awkward General Hospital cross-promotion saving things.)  But the spiral was more dramatic than anyone could have predicted.  The first semifinal (Clemson-Oklahoma) saw its audience nearly cut in half – from 28.2 million down to 15.6 million.  The second semifinal (Alabama-Michigan State) was almost as grim – from 28.3 million to 18.5 million.

Between the two games, that’s an average decrease of 11.2 million viewers on average.  That’s roughly the audience of this year’s LSU-Alabama and Ohio State-Michigan games just gone.  Poof.  Into thin air.  What was the last televised event to lose over 11 million viewers from one year to the next?!?!

This could be seen from miles away, heck it could be seen almost a full 365 days ago.  As soon as we became aware that the College Football Playoff would move its semifinals to December 31st, we all knew the television audience would be hacked and slashed into tiny little pieces.  In spite of that, the CFP committee (and the bowl games that compromise the new system) stuck to their guns to the detriment of the sport and its fans.

Here’s another thing that was easily predictable – Hancock trying to rationalize the situation in saying the College Football Playoff was sticking with this terrible, no-good, very bad idea, even in the face of numbers that proved it was a flop:

“We are committed to this,” he said, adding: “Two years does not make a trend. Let’s watch this. Let’s see what happens.”

“We’re very confident that every year will be different and over time these games will be ingrained into a part of the New Year’s Eve tradition.”

Hancock can pin this on a “lack of competitive games” but that unsurprisingly ignores the facts.  In last year’s Rose Bowl Oregon demolished Florida State 59-20.  In this year’s Orange Bowl, Clemson won by a score of 37-17.  It’s a red herring to try to blame this on anything but the time change.

Even ESPN executives were trying to put lipstick on a pig, this in spite of the fact they themselves lobbied for the semifinal games to be played on Saturday January 2nd this year – a move that obviously would have made too much sense to happen:

“The College Football Playoff is a long-term, multiplatform play for us,” Burke Magnus, ESPN’s executive vice president of program and scheduling, said in a release. “With that said, there are many variables that impact ratings results including what happens on the field and the numbers this year were obviously impacted by the unbalanced scores of these games.”

Last season’s New Year’s Six and semifinals were perfect.  Just perfect.  The most important bowl games properly crescendoed to a climax on New Year’s Day, which has always been the most important date on the calendar for the sport.  This year, the semifinals were watched by a fraction of the audience on December 31st and the bowl games on January 1st turned into an afterthought.  The Rose Bowl drew its lowest rating on record and the NY6 in total were down 13% in ratings from last year.

There are only two entities in all of America, two and just two, that would willingly sacrifice tens of millions of viewers solely because they can – the College Football Playoff and the Democratic National Committee.

All of the grumbling, complaining, and bad press geared towards the College Football Playoff is entirely self-inflicted.  Once the committee and the bowls (and the NCAA, remember them?) saw just how great the first playoff run was, they could have easily brought their million-dollar heads together and made the decision to tweak the system to ensure that it would continue in its flawless state.

Rather, instead of choosing the side of the fans and the best interests of the sport, they chose their old cronies and their own self-interests.

And to be quite honest, all of the criticism towards the committee and the powers that be comes from a place of wanting what’s best for the sport.  How do we know?  Because we saw it just last year.  We saw the numbers this year.  What the CFP is doing this year is akin to burning the film for Godfather I and II because you thought the real value was in Godfather III.

Do we have any hope that the playoff will see the light?  Given we had to wait 113 years from the first Rose Bowl to the first playoff, I wouldn’t hold my breath.