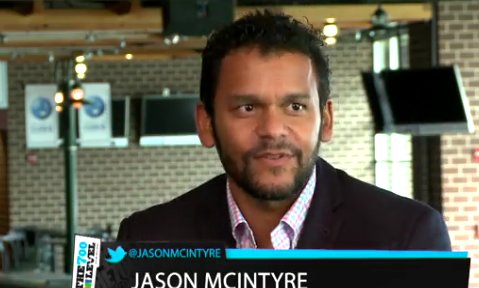 The upcoming Colin Cowherd-Jason Whitlock “Speak For Yourself” hour-long debate show, set to launch on FS1 June 13 and go head-to-head with ESPN’s SportsCenter in the 6 p.m. Eastern time slot, appears to have found its third panelist: Jason McIntyre, founder and editor-in-chief of The Big Lead. Michael McCarthy of The Sporting News reported last week that McIntyre was in talks to join the duo but that the network had auditioned a variety of talent, and Whitlock wouldn’t confirm McIntyre’s addition in an interview with McCarthy earlier this week, but Deadspin’s Kevin Draper reported Thursday that McIntyre has officially signed on:

Jason McIntyre, founder and editor-in-chief of the blog The Big Lead, has officially signed on to join Colin Cowherd, a rat wearing a human suit, and Jason Whitlock on their upcoming Fox Sports 1 show, according to multiple sources with knowledge of the negotiations. …According to a source, McIntyre’s deal with Fox is strictly for the television show, though he does have a weekly radio show on Fox Sports Radio. There aren’t currently any plans for McIntyre to write for FoxSports.com, or for Fox to license The Big Lead, currently owned by the USA Today Sports Media Group, like it does Clay Travis’s Outkick the Coverage. McIntyre, who made his name, to the extent it’s been made, with sports media and gossip reporting, has an unusual history with both of his new co-stars. Whitlock’s ripping of colleagues Scoop Jackson and Mike Lupica in a 2006 The Big Lead Q&A with McIntyre ended his first run at ESPN, and in 2007 an angry Cowherd asked his radio listeners to flood The Big Lead, resulting in it being offline for a couple of days.

It will be interesting to watch how The Big Lead covers the media going forward now that McIntyre is fully compromised by his tight association with Fox. As editor, he’ll continue to have responsibility for choosing whether or not to pursue critical coverage of his Fox paymasters and ESPN rivals; he just won’t have the same credibility someone in that role usually has. It’s worth noting that McIntyre and The Big Lead have long been at least spiritually aligned with Fox Sports. McIntyre was on the set of Jason Whitlock’s Super Bowl show when Rob Gronkowski grinded on Julie Stewart-Binks; has Clay Travis on his radio show and frequently engages with him on Twitter; and was leaning towards supporting Donald Trump up until Trump refused to disavow the KKK. The Big Lead has an entire section devoted to pictures of male athlete’s wives and girlfriends, with the “stories” often unbylined.

The Big Lead does a lot of strong media coverage, with McIntyre and Ryan Glasspiegel in particular breaking plenty of stories, but Draper’s right that the site now may face further questions about bias, especially when it comes to Fox and ESPN. That doesn’t mean they should stop covering the media, but at the very least, it would be good to see some form of disclosure of McIntyre’s Fox connections placed prominently in stories about that network.

There are many possibilities in terms of how The Big Lead could look to reduce or remove the obvious conflict of interest. It’s possible that we could see McIntyre move away from directly reporting and editing stories on the media side to focus on other stories; as those are only a small part of The Big Lead’s overall coverage. A more substantive although bigger undertaking would be potentially looking at USA Today to sell the site to Fox, as to some degree there is some level of redundancy with For The Win, and The Big Lead seems to fit into Fox’s new content ethos. It may even make sense for McIntyre to step down to focus exclusively on television and radio, as that would remove the conflict entirely and there are plenty of qualified internal candidates who could run the site.  Both on the television side and in regards to The Big Lead’s future, it will be interesting to see how this plays out.